To read about Beloit’s Fall 2021 plans, visit our Back at Beloit information site.

They are Nobel Prize winners, U.S. Poet Laureates, and internationally renowned human rights leaders. They are ground-breaking scholars and artists who champion causes and new ideas.

Hailing from around the world and across a broad spectrum of fields, they share one distinction: all are thinkers and doers. And all have joined the Beloit College community for an extended stay as a part of the college’s distinguished residency program.

Each year, Beloit welcomes as many as seven such individuals to campus to teach and work with our students, engage with our faculty, perform or present, as well as live on campus. During their time at Beloit, students have met and interacted with almost two dozen luminaries in these diverse fields.

Sponsored by the department of philosophy and religious studies, the Crom Visit Philosopher program is a series which brings distinguished and influential philosophers to campus for two days of talks, classroom visits, and lectures. It is named in honor of Scott Crom, a longtime and legendary philosophy professor at Beloit College who died in 2013.
The Victor E. Ferrall, Jr. Endowed Artists-in-Residence Program brings distinguished visual or performing artists to campus for as little as a day or two or for as long as a semester to teach, direct workshops, and perform or exhibit his or her works. During the artist’s stay, his or her work or work created by collaborating students is presented in an exhibition at the Wright Museum of Art. The program was established in 1998 in honor of the ninth president of Beloit College, Victor E. Ferrall.
The Ginsberg Family Artist-in-Residence Program was established in 2003 with a gift from Stuart Ginsberg’82 and his wife, Lisa, in order to bring distinguished artists to campus to teach, conduct workshops, and perform or exhibit works.
Established in the late 1980s by Willard Mackey’47 in honor of his wife, Lois’45, the Mackey Chair in Creative Writing program brings an author of distinction to the Beloit College campus for all or part of one semester to teach an advanced course in creative writing. “Mackeys,” as these professors are called, also give public readings, which are among the most anticipated and best attended events on campus.
The Office of Academic Diversity and Inclusiveness (OADI) Ousley Scholar In Residency honors the legacy of Grace Ousley, the first black woman to graduate from Beloit College, and is a junior scholar/activist/organizer/intellectual who is committed to the theory and practice of social justice. They should embody the “academic hustler” who fights for “social justice” in all aspects of their work.
Named for economist and sixth Beloit College President Miller Upton, the Upton Forum on the Wealth and Well-Being of Nations is Beloit’s premier residency program in economics, featuring panel discussions and a keynote address by the Upton Scholar. Though the forum events last for only one week, students are immersed in the theories and work of the Upton Scholar in a seminar course built around the ideas and research of that year’s Upton Scholar.
The Weissberg Chair in International Studies, established in 1999, brings to campus every year a distinguished individual who has made important contributions to understanding and defending human rights on the international stage. Weissberg Chairs contribute new perspectives to the teaching and learning taking place on the Beloit College campus, serving as a catalyst for conversations across campus and throughout the disciplines taught at Beloit College about the importance of preparing students to understand, promote, and defend human rights. 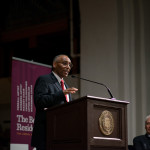 The Weissberg Chair in Human Rights and Social Justice was established in 1999, and each year a distinguished individual who has made important contributions to understanding and defending human rights and social justice on the international stage is invited to campus for a week-long residency.

2018 Mackey Chair Rebecca Makkai is a finalist for a National Book Award in the fiction category. Makkai read from her book, The Great Believers during her keynote reading last spring. Award winners will be announced in November.