The President’s House, directly across the lawn from Middle College, shares an architectural heritage akin to Beloit’s oldest building. 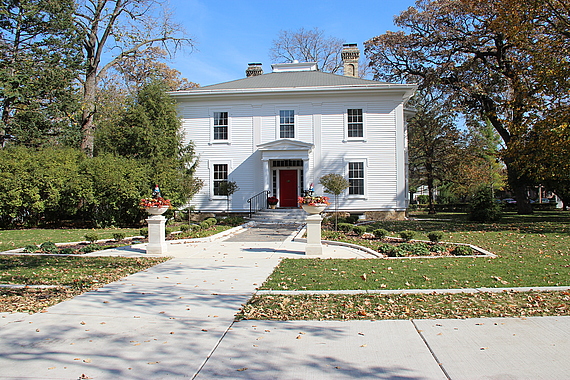 Official home to college presidents, their spouses, and families, since 1937.The home, on the corner of Chapin and College Streets, was designed in 1851 in the Federal style by architect Lucas Bradley for Beloit’s first president, Aaron L. Chapin, and extensively remodeled in the Victorian style in the 1870s. At the time of the renovation, the home was still the private residence of the Chapin family.

Ellen Chapin (President Chapin’s daughter) gave the house to Beloit in 1937, at which time the College decided to de-convert it by removing the side porches, gables, and a large front porch with carved double doors.

At one point, when the removal of a main gable on the front of the house threatened to add too much to the cost of the project, College administrators discussed the option of moving its front entrance onto Chapin St. and leaving the gable on the west side as an odd throwback to the Victorian rendition.

Fortunately, James Todd (class of 1884), a donor to the College and trustee at the time, advocated for the home’s front entrance to remain facing the Middle College lawn, where it could engage the campus, as it does today.Two turtles, with gnome riders, adorn the walkway leading up to Beloit's president's house.

Since moving into the president’s house, Scott and Melody Bierman have seen the front steps and approach walk renovated as a part of the latest master plan’s College Street improvements (which returned the drive between the house and Eaton Chapel to a pedestrian thoroughfare). The Biermans added their own touch as well: Two turtles, each of which is carrying a gnome, that spend most of the year in the planters leading up to the main entrance. The turtle is the college’s beloved unofficial mascot and greets students, faculty, staff, alumni, and guests of the college, all of whom the Biermans regularly host in the home.