This permanent exhibit examines the founding, growth, and use of the museum and its collections. Beloit College Trustee Frank Logan founded the museum that bears his name in 1894 with a gift of 3,000 objects and instructions that they are used in teaching. From the seed of those first 3,000 objects, the museum’s collection has grown to over 350,000 objects from 129 different countries and 600 cultural groups. The museum remains a teaching laboratory, training students in museum practice and fostering learning about the world’s cultures, past and present.

Around the perimeter of the second floor Shaw Gallery, above the display cases, is a series of twelve mural paintings. Entitled “The History of Man,” these murals were created between 1924 and 1926 by Chicago artist John Warner Norton (1876-1934) and were commissioned by Mr. Frank G. Logan specifically for the museum. They depict various periods in human history relating to the composition of the Museum collections. The museum also possesses study paintings for the murals. 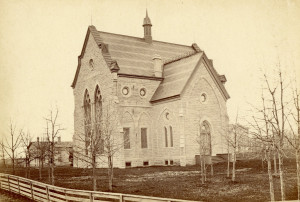 The Logan Museum of Anthropology is housed in Memorial Hall, which was erected in 1869 in memory of graduates, students, and residents of Beloit who died in the Civil War. Placed on the walls of the first floor are two marble plaques, one displaying the names of 43 “men of Beloit who fell for their country,” the other names of 46 “sons of Beloit College who died for law and liberty.”

College Archivist Fred Burwell wrote a more detailed history of the building that appeared in the Beloit Magazine in June 1994.