Old Records Never Die: One Man’s Quest for His Vinyl and His Past

Spitznagel’s book, published by PLUME, an imprint of Penguin Random House in 2016, is a memoir of his odyssey to reclaim the actual vinyl records he once owned. This brief excerpt about WBCR is part of a longer passage about Beloit.

During my junior year, I was invited to host my own radio show, despite my insistence that it should be entirely devoted to the Rolling Stones. And not the familiar stuff. All the deep cuts and outtakes and bootlegs and non-hits. The manager told me no. Their listeners (my peers) weren’t interested in obscure Stones, he said. I could host a classic-rock show, with occasional songs by the Stones, but also other artists old enough to be called “classic.” I defied him. I hosted the show I wanted. I played too many songs from Brussels Affair. I played Jamming with Edward! in its entirety. What were they going to do, dock my pay?

The manager sent me a message. He knew my affinity for Let It Bleed. So he made the record disappear. I found it in the Dumpster behind Pearsons Hall—thanks to a tip from a sympathetic colleague. I saved it, plucked it from its disgusting grave, smelling like rat piss and Tater Tots from the cafeteria, and shoved it back into the shelves. The manager—I wish I could remember his name—accepted my challenge. He took the smelly Let It Bleed out to the parking lot behind the station and, with a few witnesses, repeatedly stomped on the raw vinyl with his Doc Martens, thrashing it like a bouncer teaching a lesson to a belligerent drunk.

He returned it to the station, left it where he knew I’d find it, and scrawled “NEVER AGAIN” across the cardboard sleeve in red ink.

The message was received. I officially retired my Rolling Stones Radio Hour. I decided then and there that maybe I didn’t have the constitution for radio work. I was too stubborn. I would focus on my side career as an amateur mixologist, creating mix tapes for women I wanted to sleep with. I considered giving Let It Bleed a proper burial, but that felt like admitting defeat. So I just put it back with the other Stones records, and left the dirty work of dumping the body to somebody in authority.

Twenty-five years later, it was still there …

A Fashion Statement that Speaks Louder than Words 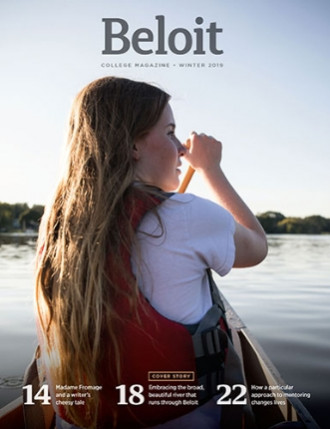 Sarah Rose Ezelle’21 goes for a paddle on the Rock River last September during a Buccaneer Boathouse event. The student group is renewing a whole lot of enthusiasm for recreating on the river.
Photo by Howard Korn ’87.