Winter in the old days involved some risks

Every winter, Beloit College students seek more invigorating methods for coping with the weather than their daily slip and slide through snow and ice to classes, or holing up in residence halls hoping to fend off sub-zero temperatures.

Nineteenth-century students escaped by way of forbidden sleigh rides from Beloit to Rockford Female Seminary, skated on the Rock River (and sometimes drowned), split wood for the fires they huddled around in dormitory and classroom, feasted on oysters, chestnuts, and hard cider, and dashed into and out of the cavernous Memorial Hall library where the only stove faintly warmed up Professor Emerson’s office and nothing else.

In the next century, students held annual Winter Carnivals featuring fraternity and sorority snow sculpting contests and ice skating races at the Riverside Park lagoon, while the most fearless students risked life and limb on the steep ski slide at Big Hill Park or pummeled each other in fierce snowball fights. 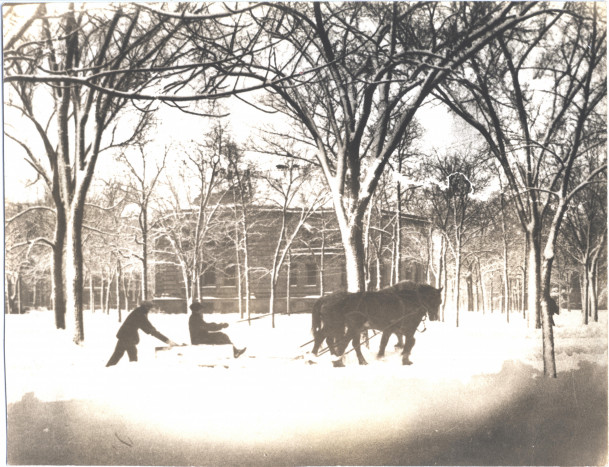 Students created a hockey rink in front of Sigma Chi in the late 1930’s. 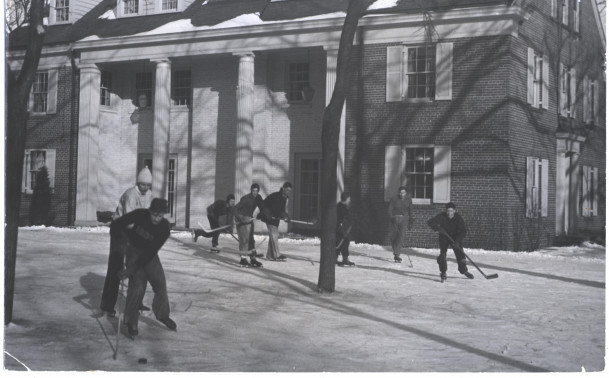 Professor Carl Welty and his wife Susan hosted a toboggan party for biology majors in January 1945 at a time when most of the college men were still on active military duty during World War II.

The Beloit College Archives holds a wonderful description of the coming of winter in a letter by Orrin Densmore, an Emerald Grove, Wis. pioneer, written on Dec. 3, 1854, to his son Benjamin, formerly a student in the Beloit College Preparatory Department. Apparently fascinated by weather and natural phenomena, Orrin Densmore kept detailed meteorological observations later published by the Wisconsin State Agricultural Society.

Winter has at length taken the reins in earnest after quite a season of forbearance in which the old king might safely indulge for very few have the temerity to question his power if not his right to rule in his turn and if he does sport occasionally a sunny smile and allow a smoky sky he has but to mount his frigid throne in the N.W. to satisfy us that his eye knows no pity, his nostrils no mercy, that his soul is but an iceberg, a fitful, impulsive, capricious cold tempered fellow…”