Fridays With Fred: An “evil” excursion?

Grave consequences abound for a rebellious group of Sophomores

On the cold, frosty afternoon of Jan. 9, 1861, 14 members of Beloit’s sophomore class climbed onto sleighs, looked over their shoulders in fear of glimpsing a stern-faced professor or two, and then set off along the snowy route to visit their “sister” students at Rockford Female Seminary.

The women waited expectantly, as one recalled in a letter to the Beloit CollegeMonthly that March: “The usual recitations were finished, and we had gathered around the table to partake of our evening meal. All were wearied with the labors of the day, and of course were not over-cheerful. We were about to retire to our respective rooms, when Miss Sill informed us that she was happy to announce that the gentlemen of the Sophomore class from Beloit would be present this evening, and that her permission was given to entertain them. What a change did these words make in that company! Each maiden felt her heart beat faster, and all were rejoiced that the routine of daily duty was to be varied by at least some excitement. The parlors were quickly warmed, the ladies dressed and all in readiness. At seven o’clock they came.”

Three days earlier, Beloit’s sophomores gathered in classmate William B. Lewis’s room to discuss plans for their trip. Freshman Thomas S. McClelland wrote in his diary that “from the key their voices are in I should think they did not agree very well.” However, they seemed in accord when they broke up their meeting with a rambunctious chorus of “Gaudeamus.” The following day they informed the faculty about their plans, certain of approval since the sleigh ride to Rockford had become something of an annual tradition. The two institutions shared the same Board of Trustees and had strong ties. A letter from President Aaron Lucius Chapin (pictured below) to Professor Joseph Emerson, then off campus, explained what happened next: “We considered the matter and remembering the evil effects of the excursion last year, and deeming it important to settle and establish the principle we have been so long and earnestly contending for, that such diversions must be ruled out of Term-time, we were unanimously of the opinion that the excursion should be prohibited. After prayers Tuesday eve I stopped the class and announced the decision of the Faculty kindly but firmly – did not blame them for projecting the excursion after the precedents of former years, but explained fully the reasons why in accordance with the announcement last Summer, we must set aside those precedents and insist that all such interferences with regular duty in Term-time should be ruled out. One of them suggested that their arrangements were all made. I answered that they could easily be recalled and we must insist that the excursion be given up.” 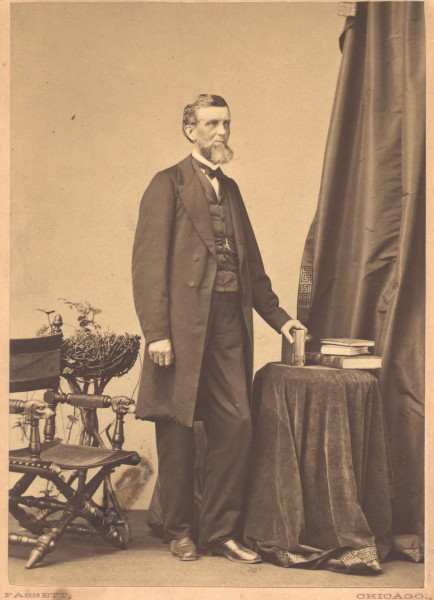 Members of the class consulted and argued with each other and came to no easy decision. While several members decided to forego the trip, the more rebellious sophomores urged those wavering to go with the majority and so two-thirds of the class made the journey. Their “occasion…of mutual pleasure and delight,” as one Rockford student described it, incurred grave consequences. Beloit’s faculty took contingent action that evening and the following morning President Chapin held “those who had taken the attitude of rebellion” behind after Chapel prayers. Chapin explained to Emerson, “[The students] were told that they were indefinitely suspended from the privileges of the Institution, and those whose parents did not live in town were required to leave on Friday. The offenders spent the day in consultation and one and another came to see us, to learn what indefinite suspension means and whether they might not in some way retrieve their position. They were told that we were ready to meet fairly and kindly any advance they pleased to make, but had no terms to define and could give no pledges. At evening prayers a paper was handed me which all had signed. It expressed regret that the Faculty considered their act rebellious, pleaded the obligations of honor to meet their engagements, in justification of their action, and promised in strongest terms entire obedience in future. This the Faculty considered not satisfactory and learning that there was a combination to prevent any one from submitting unless all came in, we felt that they must separate.”

The sophomores drafted a more succinct and contrite letter signed by all fourteen, which they brought to President Chapin.

“To the Faculty of Beloit College: We the undersigned, members of the Sophomore Class, acknowledge we did wrong in going to Rockford in express violation of the prohibition of the President, and respectfully request the Faculty to designate the date at which our Suspension will terminate.”

Chapin and the faculty responded by saying that they would consider applications after Feb.1 on a case by case basis, “each case to be decided on its own merits.”

Thomas McClellan’s diary picks up the story on Friday, Jan.11: “This morning the Junior class, part of the Senior class and all the Freshmen except Austin and Wright escorted the Sophs to the Rail Road station of the Galena and Chicago Union R.R. The brass band discoursed music for us from the Bushnell House to the cars. The procession was cheered by crowds on the side walk and many of the citizens followed to the depot. Upon arriving at the depot three cheers were given for the girls of Rockford Female Seminary and the Sophomore class. ‘Shool’ and ‘Gaudeamus’ were sung by the students. Ed Porter proposed three groans for the Faculty, but was not responded to very heartily by the students. When the cars started, bearing the class away, they were cheered by vigorous shouts from the assembled multitude. The effect of the morning’s frolic exhibited itself in the Latin recitation. In Latin Prose, I was not called and the rest of the class failed with the exception of Hayden.”

Over the next few weeks, each suspended sophomore wrote a penitent letter to the faculty, asking forgiveness and pleading re-admittance. Faculty read the letters aloud at their meeting, Feb. 6, and voted to reinstate the sophomores to their class. Within days almost all had returned. Of the rebellious offenders, at least three eventually became lawyers, two judges, and one, a college president. 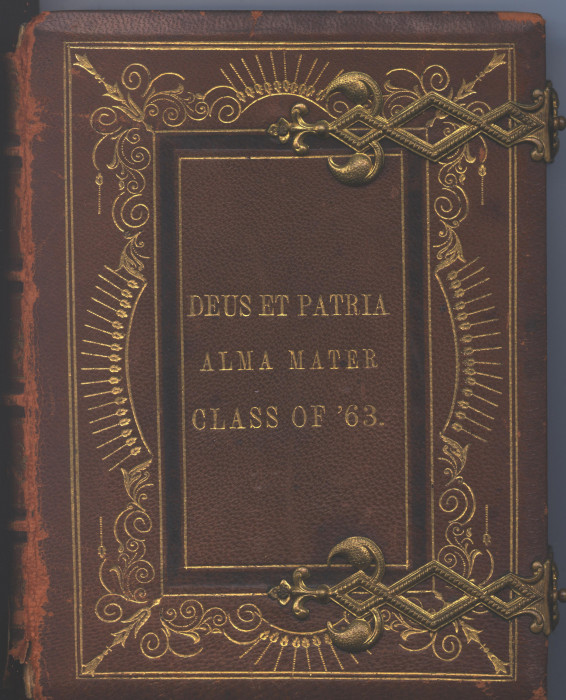 Above: class of 1863 photograph album