A look back at the social conventions of students from the 50’s and 60’s here at Beloit College.

Freshmen entering Beloit College in the 1950s and early 1960s found a homogenous student body that the Milwaukee Journal called “most conservative in the Midwest.” Sports teams reveled in their large following among town and gown, fraternities and sororities ruled campus social life, and men and women had distinct and often separate roles, reflected in the student handbooks and manuals given out to students since the late 19th century.

Prospective and first-year students also received guides and brochures, sometimes based on academic interest or gender. In the 1950s, the women’s branch of student government, known as the Associated Women Students, prepared helpful hints for incoming freshmen women. A guide from 1950, labeled COED’S CODE, designated each letter as intro to an important reminder. First on the list were clothes: “Clothes rank high in importance in every girl’s mind, but be practical. At Beloit a raincoat and scarf are just as necessary for Sunday Vespers and for teas.” D was for “Dating:” “Dating brings thoughts of dances, movies, and of course picnics at Big Hill. Remember dates and guests will think more of your manners if you introduce your house director and friends to them.” The second D stood for “Dining rooms:” “Dining rooms mean food, fun, and fraternity songs, but also good table manners and courtesy to waitresses!” 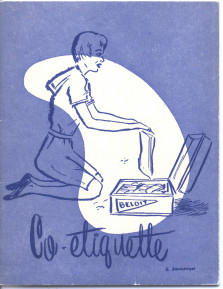 In September 1958 the AWS published a more elaborate booklet entitled, Co-etiquette, which included introductions by Assistant Dean of Students, Deborah Townshend, and President of AWS, Sandy Mack, followed by handy advice for incoming “coeds,” once again leading off with clothes: “‘What shall I wear?’ seems to be the question that continually plagues girls, and it seems particularly important when planning a wardrobe for college…Better bring a cotton dress or two ’cause it’s hot in Beloit in September. A suit is appropriate at almost any and all functions. Be sure to include slacks or bermudas for the AWS Big-Little Sister Picnic…”

Co-etiquette paid lip service to non-sorority women, known as “Independents” – “you don’t have to belong [to a sorority] to be active or popular.” But because the Greek system still dominated college social life, the booklet touted the fun and benefits of sorority rushing: “Rules set up to make sorority rushing ‘fair and square’ for everyone require that the upper-class women limit their conversations with freshmen for the first week of school. By the way, rushing is nothing to be worried about…Rush is a wonderful way to get to know the upper-class women as well as the gals in your own class.” Further instruction came via a booklet sent to every woman by the “junior Pan-Hel.”

Dormitory regulations included “hours” for women, with the most stringent for freshmen: “All Frosh gals are required to be in their dorms by 9 p.m. Monday through Thursday. Permission to stay out till 10 p.m. on these nights is granted only to those attending college functions or studying in the library. These regulations hold for the first semester – second semester everyone may be out till 10 p.m.” During that first semester, first year women also had to have “lights out” at 11 p.m. Sunday through Thursday. “It’s a grand feeling to be in bed at this hour with your work all done and eight hours of sleep ahead of you!”

Co-etiquette stressed courtesy, especially in dormitory life: “…It’s up to you to blend your lives together for harmonious living. This vital trait of courtesy is displayed in countless little ways. The gal who has it doesn’t play her phonograph so it can be heard on the next floor, even if the record is a new one…She remembers to leave a clean wash bowl…She spent one of those last afternoons before school started sewing name tags on boots, towels and wash cloths, slips, and blouses to save all worry and questions later…And above all remember that a Beloit co-ed is a lady – no matter where she is or what she is doing.”

The booklet did not neglect to offer advice about places to visit (student union, weekly chapel events) and events to attend (Pan-Hellenic Formal, Terrapin club water ballet) or about “study time” – “right foods, plenty of milk and enough sleep will insure you of a strong body which will remain durable for a lifetime, regardless of four years of hard wear at college!” – and even bank account draining textbooks – “naturally, books for some courses are more expensive than those for others and so it’s hard to estimate just what the average, staggering total is, but thirty dollars or so is usually invested in your first armful of college texts.” 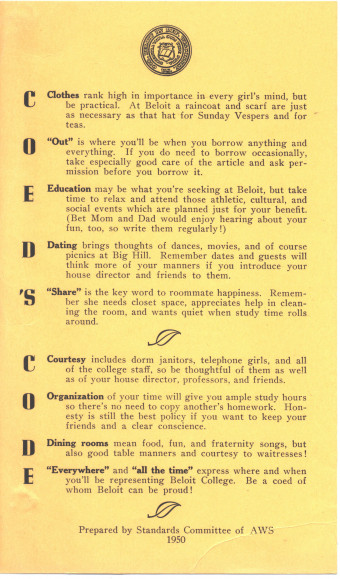 Finally, after reminding students to write their parents - “writing letters is a very major part of living away from home” and admonishing them to remember that “religion is a vital part of any life and college is no exception,” Co-etiquette provided a list of vital items each “coed” needs at college, including among others: shoe bag, garment bag, clothes brush, shelf paper, shoe shine kit, drying rack, sewing kit, pressing cloth, spot remover, soap chips, dresser scarf, and silverware (for snacks).

Within the next decade and especially with the advent of the Beloit Plan of 1964, rules gradually weakened, changed, or disappeared, the Greek system lost its grip and words of advice would take on a very different tone.