Fridays With Fred: The first class

The pounding of hammers broke the stillness of a warm summer day in July 1851. A few curious students wandered over to an oak grove in the northwest corner of the campus and watched workmen cobble together two large platforms. In another day, Beloit College would graduate its first students. 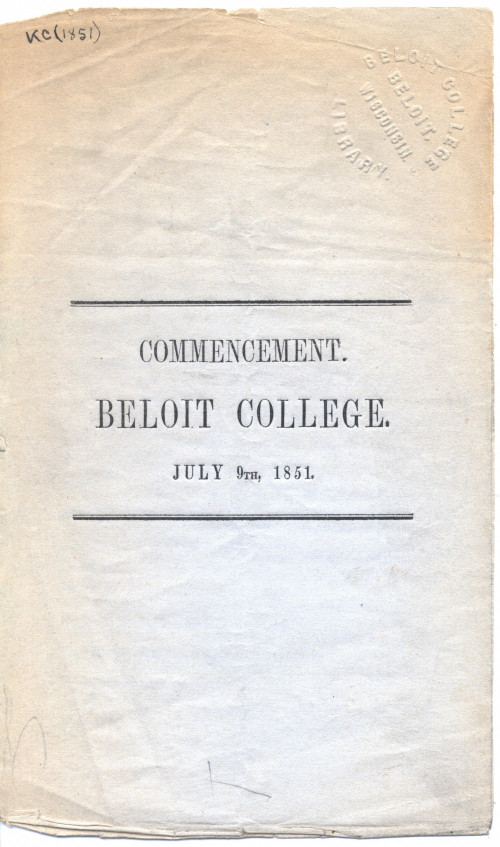 July 9 dawned bright and sunny and promised heat. Campus and town gathered at the Presbyterian Church to hear Professor of Mental and Moral Science, Miles P. Squier, deliver the address inaugurating the ceremonies. Squier’s theme was ‘The Mission of the American Scholar’ and, according to W.C.W. of Milwaukee’s Weekly Wisconsin, “it was a clear, forcible and chaste performance.” Among the “elements of success in rearing a college,” Squier listed “a sufficient field…an intelligent community…an evangelical foundation…a high purpose…steady and well-directed effort.” About the college’s future, he remarked, “it will, we trust, be a conspicuous and attractive headland – a radiating centre of enlightening and sanctifying influences.”

The college’s past, present, and future was also on President Aaron L. Chapin’s mind when after a recess, the participants and onlookers met again in the afternoon under a canopy of campus oak trees. “Four years ago last month, the friends of Education were convened in this place to witness the laying of the corner-stone of the first edifice of Beloit College,” he recalled in his brief speech. “Those foundations were commenced without a Faculty of Instruction, without students and with no reliable resources of any amount, except the pledge of a site and a building from the citizens of this village. The Board of Trustees made those first movements tremblingly yet hopefully, with confidence in the cooperation of those who have the interests of sound learning and true piety at heart, and with humble faith in God to sustain their enterprise.”

The graduation ceremony opened with music and prayer, followed by the first of many speeches, later described by Weekly Wisconsin as “masterly productions, delivered with taste and effect, and would have done honor to any College in the land.” Each senior spoke, as did representatives of the sophomore and freshman classes (there being no juniors), members of the Preparatory Department and Normal and English Department, and members of two student organizations: the debating and literary Archaean Society and the Missionary Society.

President Edward Dwight Eaton, in his Historical Sketches of Beloit College, described the three graduating seniors, Joseph Collie, William C. Hooker and Stephen Denison Peet, as “a characteristic Beloit class, singularly typical of the classes of the first generation of the College.” 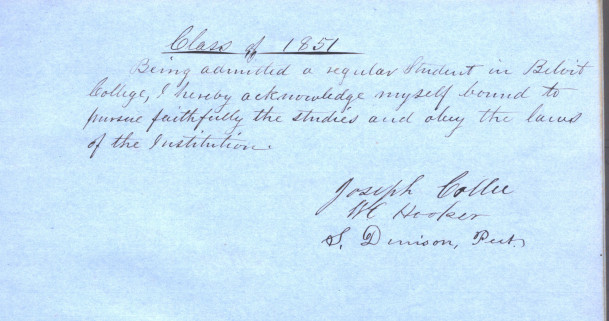 Collie was born in Scotland, moved to the United States at the age of 12 and worked for some years in the lead mining country near Mineral Point, Wisconsin. He walked and hitchhiked to Beloit, joining the young college even before it had officially opened its doors. For 41 years, he ministered as pastor of the Delavan Congregational Church and for almost as long served as a trustee of Beloit College, the first alumnus of the college elected. His son George, class of 1881, became a Beloit geology professor and first curator of the Logan Museum of Anthropology.

William C. Hooker returned to his native Illinois, where he prospered as a prominent lawyer, judge and politician. Although Stephen Denison Peet became an ordained minister, he spent much of his life studying, researching, and writing as a pioneer anthropologist, publishing among several seminal volumes, The Mound Builders, their Works and Relics. He also founded and edited The American Antiquarian.

Joseph Collie gave the valedictory address, entitled “To Live is to Act.” He was well aware of the first class’s place in history and spoke in “retrospect of the first days of [the college’s] infancy… During this period we have seen the ground cleared, the foundation laid and yonder edifice erected. We have seen its faculty one after another come and take their stations and enter upon their work. We have seen its students gathering in and advancing in their course, its materials of instruction rapidly accumulating. We have seen an entire college spring into existence.”

Collie also reflected on the value of his hard-won education: “There will doubtless come a time when the character of this institution is established, when its fame has gone forth over the land, in which it will be considered a greater honor to be a graduate of Beloit College than it is by most to day, but even then we cannot believe that its training will better fit minds for the earnest duties of life than at present.”

When he finished there was a momentary pause and spectators listened to the breeze playing with the oak leaves, a bird singing nearby, and then President Chapin rose to confer the college’s first degrees “with his usual dignity and grace,” according to W.C. W., “and the exercises closed with a fervent and appropriate prayer by Rev. Mr. Spencer of Milwaukee.” 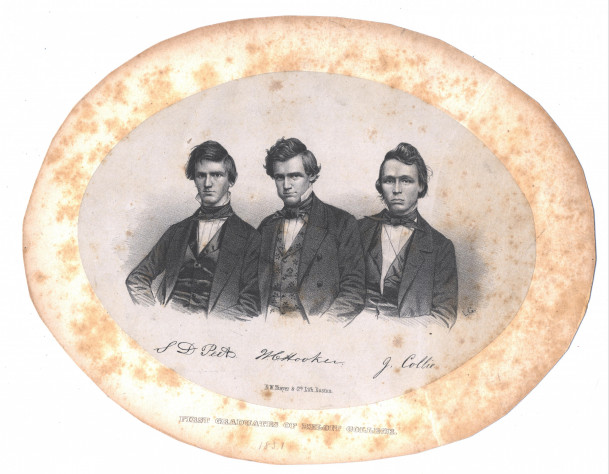 Beloit College would wait another two years to graduate its next class, but aside from 1864, when the college canceled Commencement because the entire senior class was serving its country in the War Between the States, the event became a much anticipated annual rite and celebration.