The civil rights movement and its effects at Beloit College.

March 7, 1965. Bloody Sunday. Civil rights marchers face nightsticks and tear gas as they attempt to walk from Selma, Alabama to Montgomery, Alabama. All across the United States, images of brutal violence rivet and shock TV viewers in the comfort of their homes. 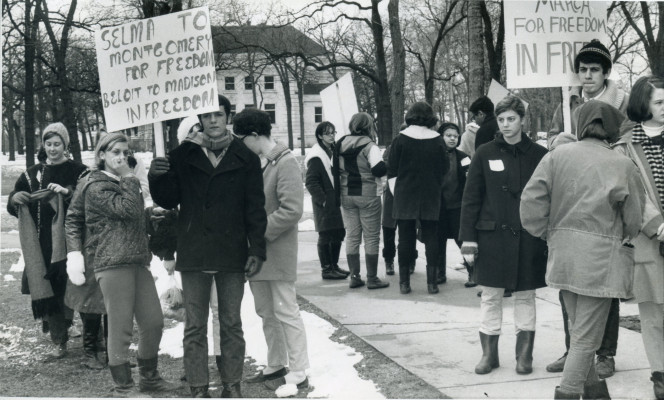 The events in Selma proved a catalyst for many Beloit College students, some already involved in the movement through groups such as the Student Nonviolent Coordinating Committee (SNCC) and the local Civil Rights Interest Group (CRIG). Fifteen students hoped to travel to Selma in support of the marchers who were protesting voter rights discrimination. By 11 a.m. on March 9, Beloit students had raised nearly $600, alas, only enough to send eight people. Lots were drawn and within hours the students were on their way to Selma.

Those left behind quickly organized a sympathy march from Beloit to Madison, its 50-miles distance approximately the same as the length of the march from Selma to Montgomery. The Round Table reported that “girls compelled to return to their dorms after the preliminary planning was completed spent the night preparing enough posters to blitz the campus with information about the proposed march by breakfast.” Other planners created news releases for local radio stations which sent them buzzing over Associated Press wires. Although not sanctioned by the college, many professors cancelled classes and offered their support. President Miller Upton stated, according to The Daily Cardinal of UW-Madison, that he was “pleased that students have chosen to demonstrate their belief in freedom in this positive manner.” Upton called Wisconsin Governor Warren P. Knowles, asking him to meet the students and explained that the march “was not a protest against the state, but an expression of appreciation.” 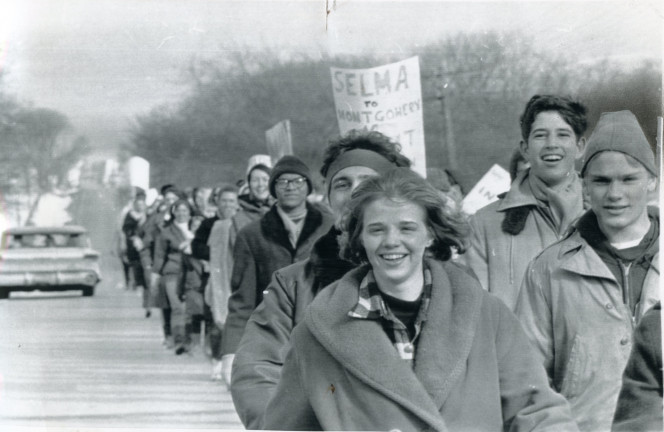 After a briefing session by Dean of the Chapel Anderson Clark and a meditation led by Professor of English Chad Walsh, some 150-175 students left campus by noon that Tuesday, accompanied at first by a police escort. By the time they reached Rt. 13 (Rt. 213 today), they hiked two by two along the left hand side of the road. Periodically, state patrolmen checked on them and pronounced everything orderly. One trooper remarked to a reporter that he admired the marchers. It was a cold, gray day and there was a gentle snow falling. Students wore their winter clothing, but, according to a Capital Times reporter, “there was a definite difference in footwear. The boys all wore heavy shoes or boots, but the girls tramped along in low-cut tennis shoes and ankle socks, apparently immune to mud and snow.” Beloit faculty and other well-wishers, including John Long, from the Governor’s Commission on Human Rights, offered hot coffee and soup and provided snacks and encouragement along the way as the students marched to their first destination, Evansville, some 25 miles from Beloit. Marchers communicated from one end of the line to the other via walkie-talkie. A farm collie joined the procession not far from Orfordville and the students nicknamed it “Selma.” The dog “constantly ran circles around the long line of marchers,” commented a Beloit Daily News reporter. “He wound up walking on three feet, but no less enthusiastic than he was at the beginning of the trek.” 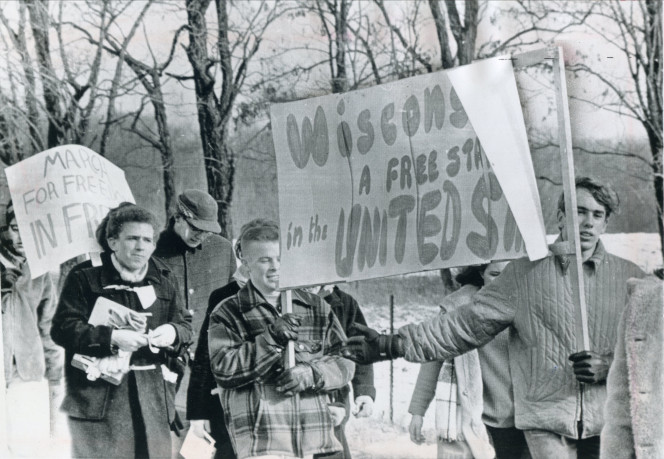 Along the way the marchers received friendly waves and cheers from passing motorists, but also occasional heckling aimed at those carrying the many placards and home-made signs, among them: “We March in Freedom,” “Eight to Selma,” “To Madison in Appreciation,” and “Wisconsin a Free State in the United States.” Back home, the Beloit College Young Republicans issued a statement: “We sincerely applaud and support the positive action taken by the students of our college in their march to Madison…Upon our record we stand as the party of civil rights trying to break the century-old tradition of racial segregation in the Democratic-dominated South. We support the struggle to give freedom and equality to all persons regardless of race and color…” However, a group dubbing itself the “Student Ad Hoc Committee for States’ Rights” criticized the march and wired Alabama Governor George Wallace, commending him for “the admirable manner in which you are upholding the laws of the sovereign state of Alabama.” According to the Round Table, the group “collected money from about 30 people on campus” and sent further telegrams to government officials. “Although the group did not disclose its size to the press, a spokesman told them that there were more than one would think.” 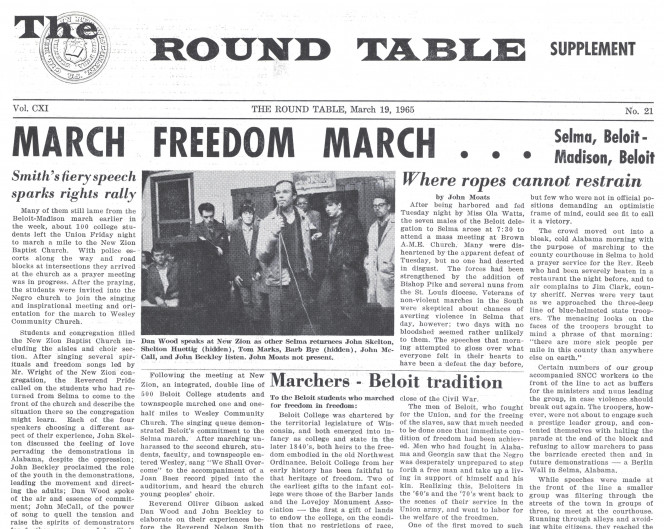 Darkness fell before they reached Evansville. The Round Table reported that “the cold was piercing, and the file of aluminum armbands shone, with flashlights on the ground spread out along the roadside. At last, long after dark, mud-splattered and weary, the survivors of the long trek hobbled up the steps of the church into a warm kitchen for dinner.” They stayed overnight at the Congregational Church, hosted by Reverend Alan Kromholz, who the previous May had participated in a voter registration drive in Canton, Mississippi. He allowed his study to become a hastily arranged first aid station for blistered feet and sore ankles. “Food was dispatched from the college commons,” the Beloit Daily Newsstated. “The church was a litter of blankets, bed rolls, apple cores, first aid kits, sox and boots…It was a strange sensation, but an inspiring one to see the bedraggled but happy students crowded into the church sanctuary.” 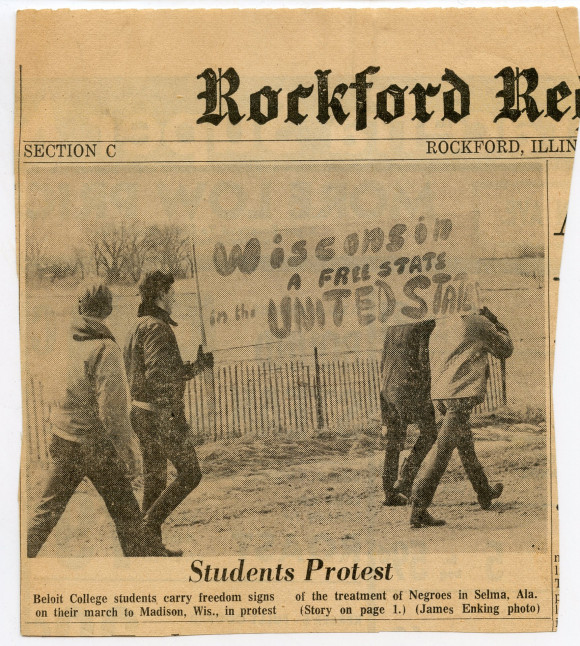 The following morning, after a 5 a.m. wakeup call and breakfast at the First Methodist Church, the students resumed their journey to Madison, where they arrived in early afternoon. Capital Times reporter Elliott Maraniss noted that “when the dome of the State Capitol came into view as they reached the top of a hill on Highway 14, a cheer swept the ranks of the boys and girls who had been walking in double file since noon Tuesday…The Capitol dome symbolized the purpose of the march: to demonstrate the freedom in Wisconsin as compared with Alabama, where marchers have been clubbed, whipped, and gassed.” Beloit students and faculty met for a brief orientation at the Calvary Methodist Church before marching to the Capitol steps. Once there, 75 UW-Madison students who had just participated in a silent demonstration at the Madison Post Office joined them. After a short speech by student Jim MacKenzie, outlining the purpose of the Beloit-to-Madison march, everyone settled down on concrete and listened to Professor Robert H. Irrmann talk about an earlier generation of Beloit College students who had gone down south to help educate freed slaves during Reconstruction after the Civil War. Next to speak was Republican Governor Knowles, who backed their cause. Knowles spoke against the “repressive and violent measures” used in Alabama. “Tear gas and clubs used against defenseless men, women and children may be effective temporarily in restraining such demonstrations,” he said, “but the basic right of citizenship cannot long be denied by such means…Few incidents in recent years have so aroused the conscience of the nation as the repressive and violent measures taken…in Alabama against those who were peaceably affirming their right to vote…Your presence here is evidence of your belief in America…and I join you in the hope that freedom and justice will soon prevail in all the states of the union.” 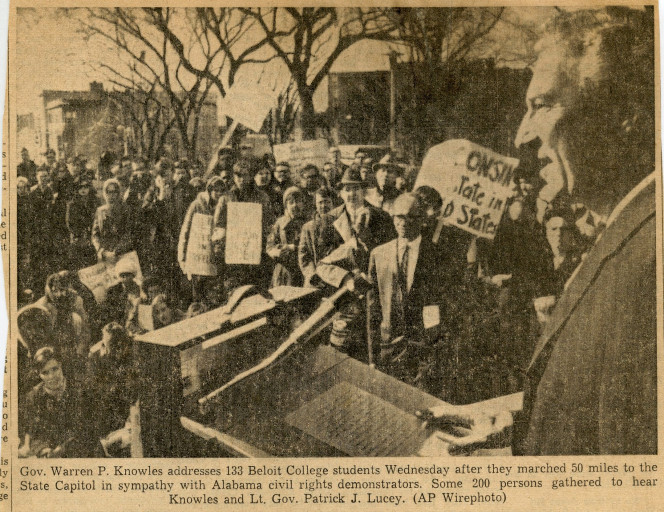 However, Wisconsin’s only African-American legislator, Lloyd Barbee, D-Milwaukee, found himself rebuffed by the Wisconsin Assembly when he introduced a resolution condemning the “shameful occurrences in Selma, Ala.” The Beloit Daily News reported that instead, “the Assembly agreed to ask for a preparation of a certificate of commendation for the Beloit College students…Later the Democratic controlled Rules Committee voted unanimously to offer a resolution denouncing the ‘shameful occurrences in Selma.’” Democratic Lieutenant-Governor, Patrick Lucey also noted to those assembled at the Capitol his feeling of shame that Alabama Governor George Wallace had polled 266,000 Wisconsin votes in the 1964 Democratic presidential primary. “We might look on this march as penance to help remove that mark on the state’s conscience,” he said. He called upon Governor Knowles and the Wisconsin legislature to enact a fair housing law. After a speech by Dean Andy Clark the marchers moved on to the Covenant Presbyterian Church for a reception sponsored by UW-Madison Chancellor Robben Fleming and his wife Sally, both Beloit College graduates and the parents of one of the Beloit marchers, sophomore Nancy Fleming. Then 18 cars and one bus took the weary marchers back to Beloit for needed and welcome rest and much ongoing discussion, debate, and further activism.