The origins of the the first Chinese students club at Beloit College. 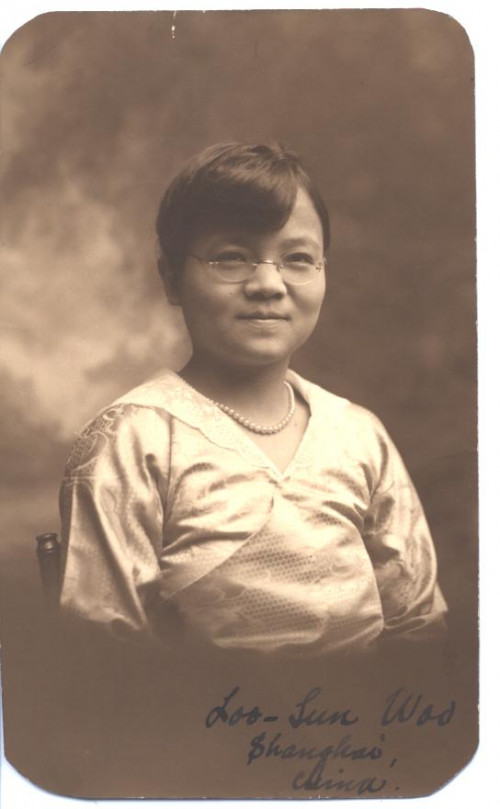 Beloit College’s first Chinese student was C.Y. Tang, class of 1918, known for his remarkable oratorical skills. Over the next ten years, nearly two dozen students from China followed in his footsteps. At the time, many Chinese students were studying in the United States through the efforts of a Beloit College alumnus, Arthur Henderson Smith, class of 1867. In 1906, Smith suggested to President Theodore Roosevelt that the United States return part of the “Boxer Rebellion Indemnity Fund” to China for use in developing higher education, including sending qualified students to the United States for further education. The Chinese government established Tsing Hua College in Beijing, where American professors taught English and prepared students for study in the United States. Several of Beloit’s Chinese students received their training at Tsing Hua, while others came to Beloit through the recommendations of missionaries and through the assistance of friends of the college. Beloit College also stepped in with financial aid and the college’s first woman student from China, Lu Sun Woo, lived at President Melvin Amos Brannon’s house.

By 1919 there were so many Chinese students at Beloit College that they formed the Beloit Chinese Students Club, under the auspices of the Association of Chinese Students Clubs of America. Members of the club helped each other adjust to American college life and provided outreach to the college and the greater Beloit community via commentary in the newspapers, talks at chapel services and at local churches and through group programs. They held their first such activity at Eaton Chapel before “300 interested and sympathetic Beloiters” on Oct. 10, 1919. Their purpose was to celebrate the birth of the Chinese Republic, then only eight years old.

“Rising at last triumphant out of a hoary age of monarchy, China, the new republic, stands today like a little child among the bulks of the other oriental governments,” student Tun Yung Pai said at the gathering, reported the Beloit Daily News. “She looks toward America. Sometime she hopes to stand shoulder to shoulder with America, each in her own sphere shining as a light of democracy over her half of the hemisphere.” 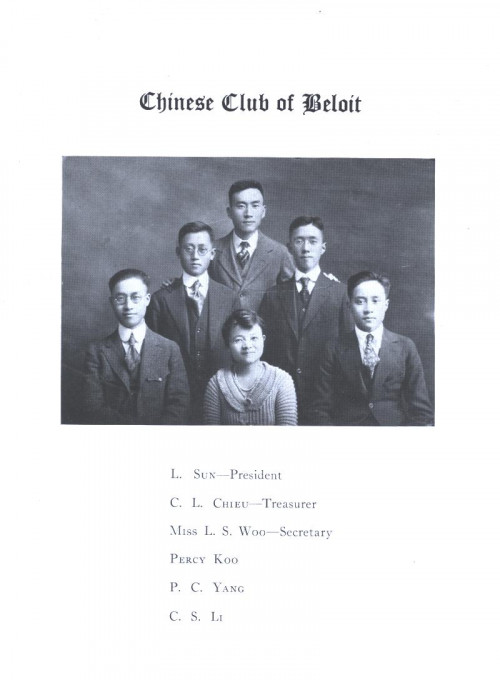 Five of the club’s men sang China’s national anthem accompanied on piano by Lu Sun Woo. “As the first chord was struck the audience rose and remained at attention while the queer, minor-noted, wailing song of the Republic of China, was sung. Unique as it was, it carried the certainty of seriousness and was most impressive.” Dean George Collie and President Brannon also spoke. A few years later Collie made national news with his proposal that Beloit become a model “international college,” and apparently the theme was already germinating. “Now is the time when Beloit College students need to learn of the ways, the ideas, and the aspirations of other nations,” Collie said. “We are getting away from the isolation of nationalism. The world is growing closer together.” After further songs and “cheers” the audience convened for refreshments in the chapel alcove and viewed an exhibit of Chinese cultural artifacts. The students capped off the evening with an “elaborate Chinese celebration dinner…at the home of President Brannon.”

The Chinese Club continued to host well-attended dinners, one of them, described in The Round Table as “indescribable” and “mystical”: “So it was to the Occidental. Rice as only the Chinese can cook it, chicken fried delicately yet differently, and an unknown concoction, the proof of whose acceptability was that everyone partook.” The following year, the club sponsored another celebration and exhibit which included examples of photographs, jade carvings, embroidery, silk, scrolls, and coins.

The year 1921 brought the founding of the Chinese Communist Party amidst an ongoing famine. The Beloit Chinese Students Club decided to give a benefit to help the international famine relief efforts. The students borrowed props from Chicago and invited Chinese students from the University of Wisconsin-Madison to provide the musical accompaniment to two plays, The Match of Gold and Jade, a contemporary drama, and World of Fools, an original comedy. Five hundred people filed into Beloit’s First Congregational Church on Saturday, February 16, 1921. The Beloit Daily News critic found the acting in the first play “decidedly of the better amateur variety” and remarked on the “clever pantomime” of the second. Although the expenses for scenery, props and musicians “amounted to quite a sum,” the students cleared almost $200 from performances in Beloit and Rockton. The Round Table commented that “members of the club express their gratitude to the college family which made possible the aiding of Chinese famine sufferers by attending the play and by contributing to the famine fund.”

Like many student organizations, the Beloit Chinese Students Club eventually faded away, in this case not through lack of interest, but through attrition. By the mid 1920s fewer Chinese students attended the college, and during the heart of the Depression in the 1930s, none at all. Many of those who had attended Beloit College went on to graduate school at prestigious universities and then returned to China as academics, politicians, and even revolutionaries, providing tales for another time.