Fridays with Fred: writer Sandburg speaks with the ‘breath of the old sages’

Beloit College has a literary visitor.

On December 1, 1926, President Irving Maurer noted in his diary: “Greatly engaged tonight, after a busy day in the office, meeting and hearing Carl Sandburg.” 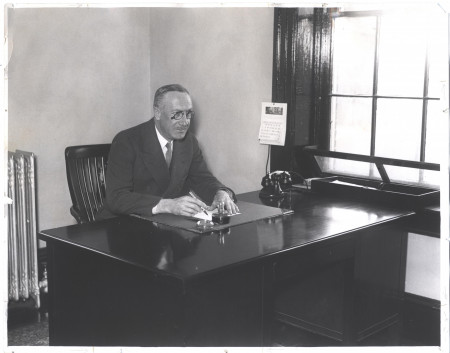 The renowned Midwestern author had visited Beloit College a few years before and had so stirred the college community that students clamored to have him back. Sandburg traveled from Chicago to Beloit on Wednesday, December 1, where he attended a dinner in his honor, hosted by Dean William Alderman at the Faculty and Alumni Club, joined by President Maurer, members of the Student Council, and a few other dignitaries. Later that night, writing in his diary, Maurer described his initial impressions of Carl Sandburg:

I sat at Mrs. A’s left and Sandburg at her right, so we confronted each other. He is a Scandinavian, has the washed out, disillusioned, run down air and clothes of the newspaper man. His…gray hair is cut much like a girlish bob with the locks hanging straight down over his ears and eyes from a split part. Speaks very deliberately, and he has about him the breath of the old sages and of Norse

mythology – he seems to be seeing imps and sprites on icy crags.

Sandburg had forgotten to bring a copy of his recently published book, the highly acclaimed bestselling biography, Abraham Lincoln: The Prairie Years, so Maurer loaned him his personal copy. Crowds of students and townspeople paid fifty cents each and pushed into the college chapel, cramming into the pews. President of the Student Council James Gage, later long-time alumni secretary and college editor, introduced the evening’s speaker. 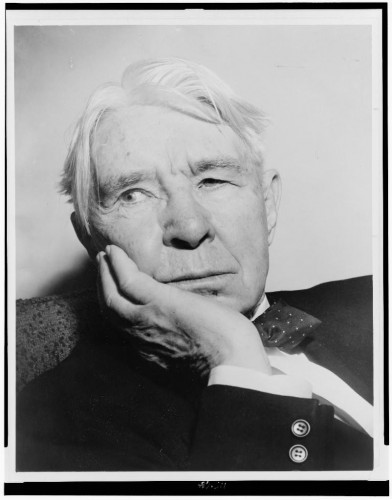 Carl Sandburg strode onto the stage, “armed with a sheaf of books of which he is the author,” noted Minnie McIntyre Wallace of the Beloit Daily News, “and the same guitar, no doubt, which he twanged so entertainingly at the college on his previous visit.” Sandburg opened the program with stories and anecdotes about Lincoln, whom he described as “the strange friend, the friendly stranger…He is to North American territory a seer and man of wisdom looked to and sought in spirit as Confucius. Never was a more strangely companionable, a more completely remote figure, invested with such wide range of tragedy and comedy…He had something of immensity about him.”

Sandburg moved on to selections from his several volumes of verse, reciting, among others, “Wilderness,” “Buffalo Dust,” “Cahoots,” and “Bricklayer’s Love.” He read a piece from Slabs of the Sunburnt West, borrowed from an audience member and, according to the Beloit Daily News, “[he] cracked a joke at the expense of the owner…because that page of the book was still uncut.” A Round Table reporter noted that “the selections…were read as only Sandburg can read them, poems of the big-fisted, rough-neck sort of poetry…and poems with delicate perceptions of beauty – poems with the surge of a Norse saga, poems with poignant mysticism.” Minnie McIntyre Wallace described his speaking style: “Sandburg talks with the most disarming informality, which one is sometimes led to suspect is good theater. He is possessed of a picturesque and interesting personality, a resonant voice and the gift of the raconteur…He speaks in casual, remote, abstracted manner, but it never fails to hit the bullseye of attention.”

He concluded his program, “chanting” from his Rootabaga Stories and singing folksongs to the accompaniment of his guitar, among them “The Boll Weevil Song,” “The Negro Doughnut Man,” and “A Saddle Song from New Mexico.” McIntyre remarked that “[he] can moan a spiritual in capital fashion to the strumming of the guitar strung carelessly from his shoulder with its silk cord.” Sandburg was widely known for collecting American folksongs, which, as McIntyre noted, he “gathered from the plains and cotton fields, the wharves and out of the way corners of the southwest.” In 1927, the year after his appearance in Beloit, he compiled a vast selection of folk songs under the title, The American Songbag.

The Round Table summed up Carl Sandburg’s wonderfully successful visit:

In the last analyses, Sandburg’s real charm is his keen observance of little human things, his never-sated joy in existence, a continually fresh delight in the variety and wonder of life…” The paper reported that “the large and sympathetic audience” demanded more and Sandburg consented to several encores, after which he said, “Your faces have been kind to me tonight. I thank you. 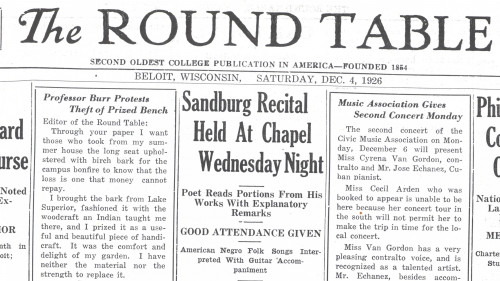 Sandburg stayed to greet people and sign copies of his books. Afterwards he joined President Maurer at the Faculty and Alumni Club where they talked. Maurer sent out for some food and they snacked on “cold chicken, buns, and weak coffee,” according to his diary. “Sandburg drawled along between mouthfuls, eating as deliberately as he talked, touching things generally.” From general to specific, however, they moved on to the subject of Wisconsin politics and politicians.

“He is impressed with La Follette,” Maurer wrote. “Says the whole situation is dramatic beyond words. He pictured Mrs. Bob as a tiger cat, helping the father and now the son into wearing, lonely, battle, keeping up their courage, advising and guiding them in their political decisions.” The senior La Follette, known as “Fighting Bob,” had died in 1925 after a long, distinguished, and controversial career in Wisconsin and national politics. His son, Robert La Follette, Jr. succeeded him in the United States Senate, elected as a Republican. He later co-founded the Wisconsin Progressive Party.