A lively tradition of irreverence among Beloit College students spans generations. As early as the 1850s students released “mock” programs for annual events such as the Junior Exhibition, in which students gave speeches, read poetry and performed skits before the public. Humor articles appeared in the Beloit College Monthlybeginning in 1853, and in its successor, the Round Table. In 1889, the class of 1890 issued the college’s first yearbook, the Codex, which offered plenty of room for parody and pure silliness along with more standard fare. 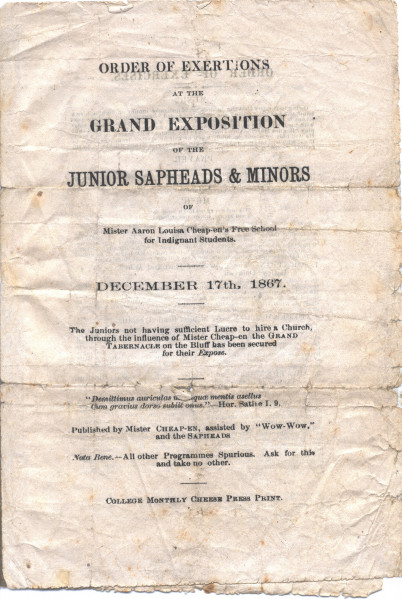 Administration and faculty did not always take kindly to such unrestrained student high jinks. In 1873, the faculty dismissed two students from the college for their involvement with the Junior Exhibition mock program which, among other offenses, posed the question: “Why is this Class like a Medium? Because it is frequently under the influence of spirits.”

For the 1899 Codex, Jay N. “Ding” Darling, poked fun at President Edward Dwight Eaton and the faculty by depicting them in ballet tutus. Some of the faculty were amused, others furious. Although probably a result of indifferent scholarship due to incessant drawing and not because of his outrageous cartoon, “Ding” did not graduate with his class of 1899 but left Beloit for a year and walked with the class of 1900. However, he became one of the college’s favorite sons when he went on to become a Pulitzer Prize-winning editorial cartoonist and prominent environmentalist. 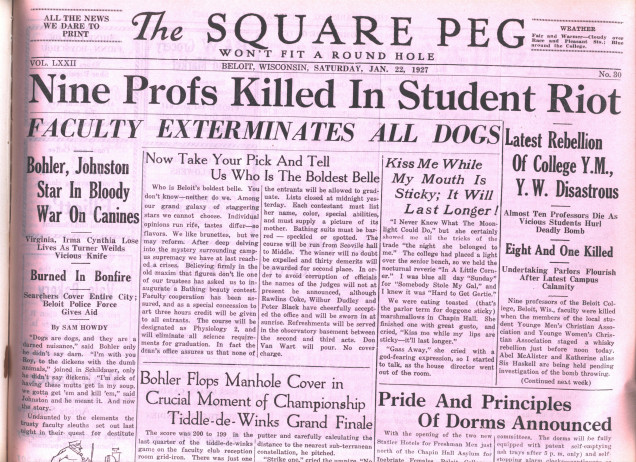 On Saturday, January 22, 1927, the first of over 80 years of Round Table parody issues appeared on campus in hot pink. The Square Pegdescribed itself as the “Second Boldest College Publication In America — To Date” and featured front page headlines such as, “Nine Profs Killed in Student Riot,” “Faculty Exterminates All Dogs,” a column entitled the “Dorm Dirt,” facetious editorials, and the 1927 football schedule in which the Gold would face such stalwart rivals as the Shanghai School of Mines, the Art Institute, and an away game with the School of Fish at All Wet, Indiana.

Since then, students have produced dozens of parody issues, only a few appearing on April Fools’ Day. The Beloit College Archives and Morse Library have back runs of the college’s student newspapers dating to 1853, including examples of such comic triumphs as: The Beloit Enquirer, The Sleaze Table, The Conservative Rag, Beloit Blooprint, The Round Stool, Red Scare, The Hull Street Journal, The Beloit Weakly, The Round Fable, Weasels on Parade, and The Feminist Examiner.