Fridays with Fred: A Call to Arms Reaches the College

On April 11, 1861, confusion reigned in the northern press about just what on earth was going on between the United States and the Secessionists in Charleston Harbor. “Latest Advices” in the Thursday edition of the Beloit Journal and Courier, reported that “the Government has fully determined to reinforce Major Anderson’s commands at all hazards…that the floating battery has been towed into position between Sullivan’s Island and Fort Sumter, and that Fort Sumter would be attacked without waiting for the arrival of the abolition fleet…that Jeff. Davis has telegraphed to Charleston not to fire on any vessels entering the harbor for the purpose of supplying Fort Sumter with provisions…that the President has ordered guards to protect the public buildings…and finally, those best informed in the Government policy give no credence to the report that there will be a fight in Charleston harbor, and declare that Sumter will be evacuated. We give the above, ‘alf-and-‘alf, for what it is worth, not doubting that it is either true or false.” 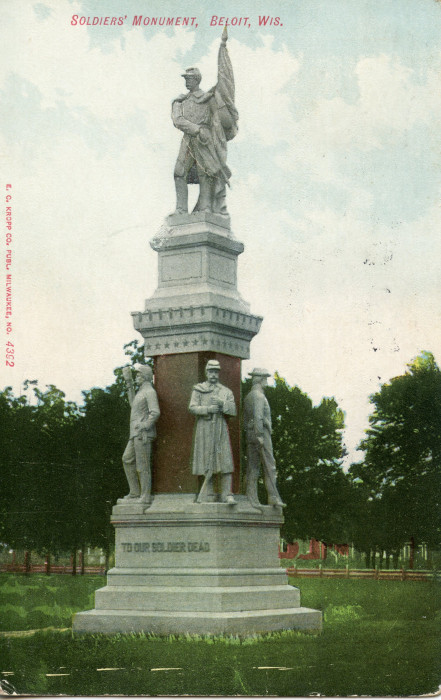 The following day, Confederate artillery fired the first salvo of the War Between the States, blasting Fort Sumter with a barrage of cannon and mortar fire. Citizens of Beloit and students at the college waited impatiently for news.

Beloit College student Thomas S. McClelland wrote in his diary on April 13, “The Chicago Tribune of to-day, announces that war has actually begun. The forts in the vicinity of Charleston have begun to bombard Fort Sumpter [sic], and this fort has opened its ports, upon the rebels. God and the right prevail!”

The rebel attack proved too much for the outmanned, outgunned defenders, who surrendered the fort on April 14.

President Lincoln called for 75,000 volunteers, and of course Wisconsin wanted to do its bit. Governor Alexander W. Randall issued a proclamation calling for soldiers and funds: “All good citizens, everywhere, must join in making common cause against a common enemy…I hereby invite the patriotic citizens of the State to enroll themselves into companies of seventy-eight men each…”

War fever took hold in Beloit and at the college. On the 17th, the first day of the new term, Thomas McClelland noted how distracted the students were. “At five o’clock the old College bell began its old tune to the music of which only a few came. Prayers were attended by about half of the College students…A war meeting is held at Hanchett’s Hall to-night. I stopped in a few moments. Converse was speaking. He did not seem to get up much excitement. There seems to be a hearty desire on the part of the people to sustain the administration.”

Within two days, Beloit College saw several of its college and academy students enlist, Beloit College President Aaron Lucius Chapin mentioning in his diary, “rec’d calls from students bound for the war…exciting times.” McClelland wrote that “the excitement and war preparations are the only themes…Our college community is thrown entirely out of its equilibrium. No student pretends to get his lessons. To-morrow the Stars and Stripes will be displayed from Middle College.” 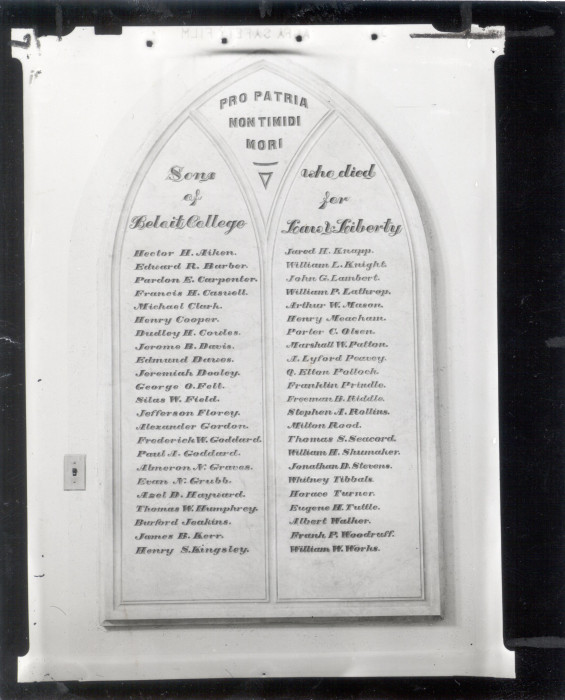 The Beloit Journal and Courier depicted a city in commotion: “On Friday last [April 19]…Business was suspended, and knots of men were assembled at every corner, eagerly discussing the progress of events.” Citizens flocked to a 3 p.m. meeting at Hanchett’s Hall for the purpose of forming a Home Guard. One hundred men enrolled. Following the meeting, the newly minted soldiers marched through the streets of Beloit, parading behind a military band. “Wherever they appeared, they were greeted with loud huzzas.”

Beloiters reconvened at 7 p.m., filling Hanchett’s Hall “to overflowing, many not being able to get in.” The meeting opened at 7:30 with a prayer by President Chapin to an “audience…hushed in silence.” Those assembled sang “God Bless our Native Land” and after a speech, the Beloit City Guards filed through the hall. More speeches followed, after which the audience cried out for President Chapin to return to the speaking platform. The newspaper described his speech as “an eloquent appeal in behalf of the cause of truth and justice. He addressed the volunteers, urging them to strike right manfully for the principles of Liberty, and to go forth, putting their trust in the God of Battles.” Later that night, McClelland commented in his diary that Chapin “uttered some noble sentiments.” To tumultuous cheering, Dr. H.P. Strong read out loud the list of volunteers and then more men stepped forward to join up, including several Beloit College students who “urged other of their companions to do the same.” Mr. B. E. Hale arrived from Chicago with the latest news of the war. “Upon it being announced that some of the Government Troops had been killed at Baltimore, the excitement of the audience rose to a pitch of absolute frenzy. Cries of vengeance upon the traitors, were heard in every quarter of the hall, and several minutes elapsed before order could be restored.” The crowd dispersed late that night, but patriotic ardor continued unabated on the streets of Beloit: “During the progress of the meeting, the City Guards paraded the streets; cannon were fired, and immense bonfires illuminated the city till midnight.”

Over the next few days, Beloit’s enthusiasm persisted with further meetings, resolutions, enlistments, and above all, speeches. Professors J.J. Blaisdell and Joseph Emerson gave addresses described by the Beloit Journal and Courier as “calculated to inspire the audience, and particularly the Volunteers, with a proper estimate of the momentousness of the cause in which they had embarked. They regarded the present struggle as a second Revolution in defence of the liberties which our Fathers established. They reminded the people that the world was awaiting with anxiety the issue of this contest, and besought every American to be true to his country, and to the cause of justice, which is the cause of God.”

Meanwhile, the college raised the Star-Spangled Banner at Middle College and held its own rallies, including stirring speeches by students and professors William Porter and Henry Kelsey. Students began drilling on campus every day under the direction of John H. Reigart, while others joined the ranks of the Volunteer Company of Beloit or left for home. 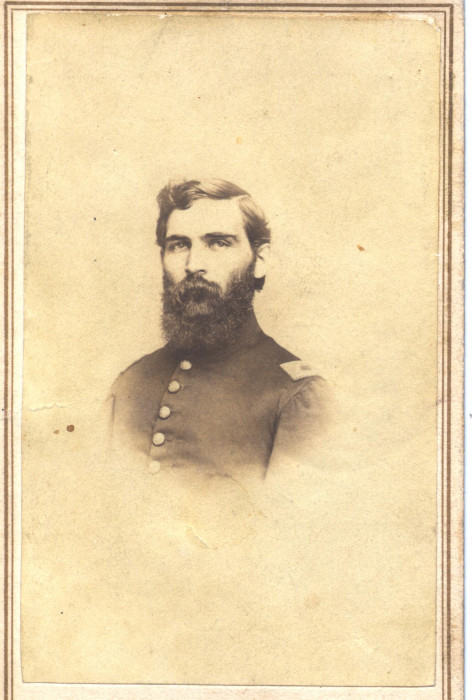 As the men prepared to depart for further military training, the women of Beloit also had their roles to play, according to the Beloit Journal and Courier: “With true female devotion, they are engaged in furnishing blankets, bandages, lint, etc. for the…comfort of the troops who leave this place.”

The firing on Fort Sumter had galvanized Beloit into patriotic action and, as the Beloit Journal and Courier noted, the initial excitement brought the people of Beloit together in common cause, regardless of class or political persuasion: “Indeed, never in the history of this city has there ever been manifested such a depth and glow of feeling as has been exhibited since the issue of the President’s Proclamation, and whether the contest be long or short, Beloit will not be found wanting in energy and attachment to the cause.”

However, it would not take long for the city and college to feel the devastating effects of the Civil War, as many soldiers returned home gravely injured, while others did not return at all, casualties of battle or disease.

The soldier pictured in uniform is Daniel Densmore, from the class of 1858.