Baccalaureate ceremonies back in the day were quite different.

Along with graduation exercises, one of the hallmarks of Commencement at Beloit is the Baccalaureate program. First held in 1851, Baccalaureate traditionally took place at First Congregational Church on the Sabbath previous to Commencement day. For many years, President Aaron Lucius Chapin delivered the Baccalaureate sermon, followed by a more intimate message to the graduating seniors. There appears to be no extant description of the college’s first Baccalaureate service, but a manuscript of Chapin’s sermon, entitled “Hope to Be Chastened by the Faith of God,” exists in the Beloit College Archives. 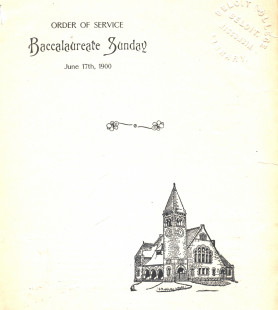 Apparently Beloiters from town and college flocked to the early Baccalaureate services. The Daily Wisconsin, a newspaper from Milwaukee, described the 1854 event and Chapin’s sermon: “It was an earnest setting forth of the value of the Bible, as a young man’s guide. It was listened to with fixed attention, by a crowded audience; and when, in the closing address to the class about to be graduated, the speaker breathed forth his affectionate, fatherly interest in the future welfare of his people, many an eye glistened, and many a heart heaved in sympathy.”

By 1861, as the nation embarked on its five-year struggle in civil war, Chapin tailored his remarks to the events of the day. According to the Rock County Republican, his theme was “the nature of civil government and of Loyalty to the Government.” At the end of the Civil War, during which time the college had endured its own struggles, an exhausted President Chapin recuperated in Europe and ceded his usual post as Baccalaureate speaker to Professor Joseph Emerson.

Aaron Chapin’s handwritten Baccalaureate address of 1886, the final year of his presidency, offers sentiments both timeless and of their time, affirming a common thread through Beloit College’s history of training students for service in the world: “I almost envy you the opportunities and privilege of the time in which you start out. By all signs it is manifest that great issues are just at hand. You may reasonably expect within the period of your lives to see great, beneficent changes in human society and the world’s condition…Range yourselves under Christ’s banner, catch his spirit, with him identify yourselves with the poor, not to encourage their unreasonable and lawless violence, but to lend a helping hand, to plead for their just rights and to guide them in the true way to secure relief for their wrongs…Bearing a part thus in the self-sacrifice and toil of the struggle, it will be yours also to share in the joy of the triumph which is sure to come, the beginnings of which you may hope to see.”

Chapin’s successor, Edward Dwight Eaton, was also a minister and gifted orator. The college was so enamored of his address in 1916, they published it as a pamphlet under the title, “Glimpses of Seventy Years.” Eaton, who later wrote the first book-length
history of the college, Historical Sketches of Beloit College, summarized each decade of its history, followed by reflections on the college’s past, present and future. What he said after seventy years holds true today after one hundred and sixty-five:

“How totally different the Beloit College of the first decade seems from that of the seventh decade, and yet how essentially identical are the two! In outward aspect, in equipment, in size of faculty and body of students, in methods of instruction and administration, they belong to two different worlds, with apparently nothing in common. Yet in inner life and guiding principles they are both most vitally one… Not one of us can for a moment dream that we have reached a stopping place in the development of the college. This hour is but a brief reconnaissance upon the march; then the word again is forward. New problems, new solutions, new difficulties, new courage, new achievements; this is the only program of the future…”

Over the decades, Baccalaureate services evolved to include secular talks instead of sermons and added choral, musical, and dance performances by students and others. Yet it is a Beloit tradition that persists. Eaton suggests why in his 1916 address: “It is good to remind ourselves that the years of our history are not dead. They return on our festival days. They throng about us rejoicing in the part they were given to play in the drama of the college’s unfolding life, and in all that we enjoy through their fidelity and faith.” 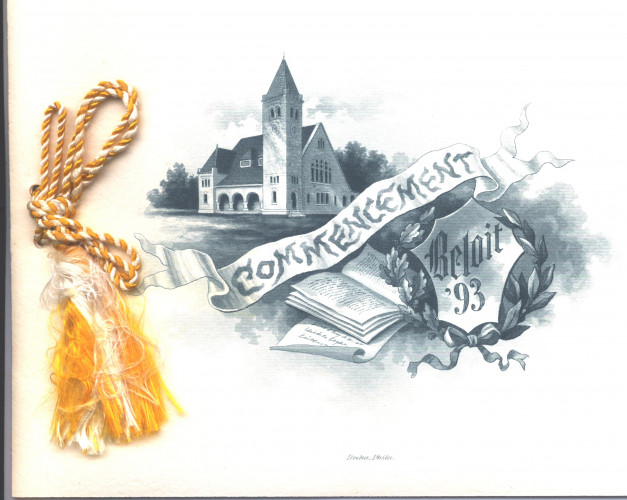