Fall semester 1914 was already well underway when the stranger finally arrived on campus. With every dormitory room occupied, none of the officials quite knew where to put him. At last, someone took him by the arm and led him to old Chapin Hall, a dormitory near Pearson’s Hall of Science. The frail-looking young man climbed three flights of well-trod stairs to Chapin’s unfinished attic, where he would live until better accommodations became available. The bewildered and lonely new student set his valise down, crossed the dusty room and gazed out the window to the verdant green campus below. He was more than 7,000 miles away from home. 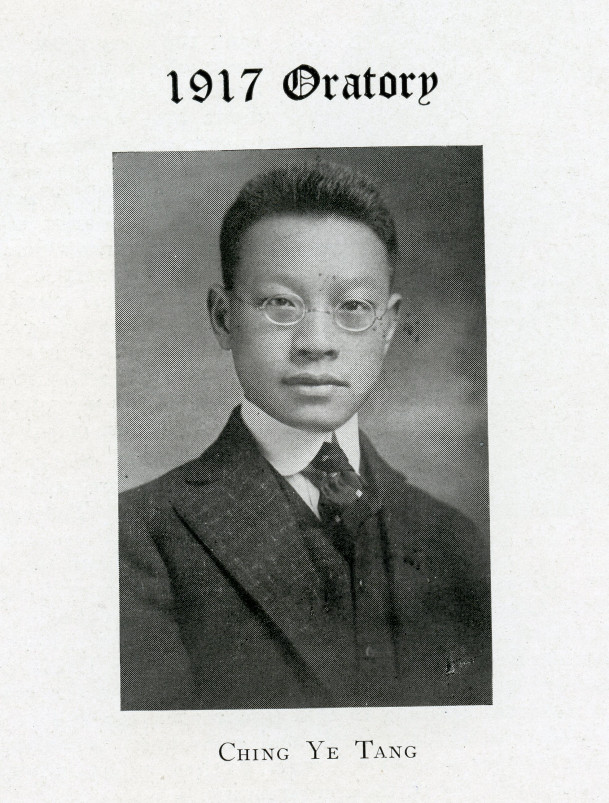 When Beloit College’s first Chinese student arrived on campus from Shanghai, he was 16 years old and undersized, weighing only 76 pounds. At the time, Ching Ye Tang knew only a few phrases in English, but his father, founder of Chiao-Tung University, recognized his potential brilliance as a student and wanted him to receive an education in the United States. A Nanyang College professor recommended Beloit, which, with its long tradition of educational missionary work in China, opened its arms to Ching Ye, or Cy, as students called him. He learned English rapidly and earned good grades right from the start, also gaining respect and friendship from the older students. Few, if any, prophesied the success he would achieve as a junior.

Oratorical contests were very popular and highly anticipated among the students, with annual “home” contests followed by state and interstate contests. If a student wasn’t a football or baseball star, successfully competing in debate or oratory was the next best thing. By his junior year, Cy Tang not only spoke English fluently he was beginning to excel at writing it. In December 1916 he entered a preliminary contest designed to choose the best speakers for the “home contest” held a few days later. Tang won handily, as the Beloit Daily News noted:

“His topic, ‘The New Republic,’ an oration on the Chinese republic, the world’s newest Democratic government was a remarkable theme. The young Chinese student expressed himself with clearness and decisiveness. His delivery was almost perfect.” 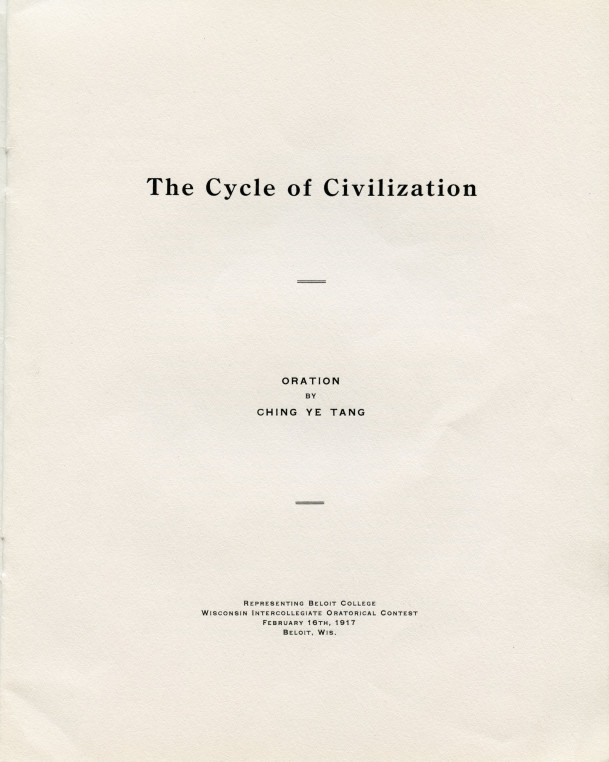 Although Tang came in second to fellow junior Earl Power in the home contest, by early January 1917, the college’s public speaking department announced that he would represent Beloit in February’s State Oratorical Contest. Power had elected to train for the Peace League Contest instead. The Round Table proclaimed the state contest “the premier forensic event of the state of Wisconsin…victory in it is much coveted.” In those years, Beloit was a powerhouse in oratory. Of the previous 28 contests, Beloit had won 24. In order to compete at such a high level, Tang underwent weeks of grueling practice under the direction of Professor Clayton DeLisle Crawford. The Round Table described his daily regimen:

“He has to practice before and after meals, during meals, and all other times. He lives on practice, does Cy. All he has to do is get up at six a.m., charm the mirror with his delivery till seven, eat a bite, go to classes till noon, eat some more, express his sentiments to the glass for another two hours, wend his way to Scoville Hall at three, undergo two hours under Messrs. Crawford and Cox, trainers par excellence, eat supper, study a while, and move the mirror to tears again till bed time. Yes, that’s all. The rest of the time he has for his own use.”

For the upcoming contest, Tang revised his earlier speech, entitling it “The Cycle of Civilization.” The speech, as the Beloit Daily News noted later, dealt with civilization moving from “its cradle in the orient” to other parts of the world and finally cycling back to China for a “reawakening.” Given an advanced copy, the Round Table praised it as “one of the strongest orations submitted in years.”

On the morning of Feb. 16, students skipped their usual Chapel hour and instead gathered at the Smith Gymnasium for a pep rally in honor of Ching Ye Tang. The Round Table commented that “student enthusiasm ran high, and Tang knew that the school was behind him.”

That night, students and townspeople crammed into the college chapel pews for the contest between orators from Beloit, Lawrence, Ripon, and Carroll. The youngest to ever appear in the state contest, Ching Ye Tang spoke first, considered a disadvantage by experts. “In spite of this,” the Round Table stated, “his clear, gripping appeal for China made…an impression on audience and judges alike…Tang plead for a national spirit in China to protect the rising democracy and urged the introduction of western sciences to make China efficient to feed her hungry; and clothe her poor…His poise on the stage, his mastery over his thought made a strong grip on the audience.”

Two other speeches dealt with internationalism, “The Higher Patriotism,” by the Ripon speaker, and “The Appeal of Latin America,” by the Carroll representative. However, according to the Round Table, the Lawrence student, speaking about “The Power of Motive,” was Tang’s strongest competitor: “Although the Lawrence orator spoke in the coveted last place, [he] could not eradicate the strong effect of Tang’s oration.”

Tang’s fellow students knew that he had done well, but had to wait for a final decision. While judges conferred, students traipsed over to the women’s dormitory, Emerson Hall, for a reception. A Round Tablereporter was on the spot: “Songs, punch, and hand-shakes filled up forty-five minutes. Then a hush. The decision was announced.” The leading judge stood up and proclaimed Ching Ye Tang the winner by three points.

“Tang was seized, hoisted on shoulders, and bowed his acknowledgements to the crowd. Freshmen then scattered, raided down town alleys of their boxes and a rousing fire lighted up the whole campus. President Eaton, Professor Crawford, Cox and Tang spoke from the Rostrum Beloitensia.”

The Beloit Daily News described the spontaneous outburst by proud Beloiters as “one prolonged howl of joy.” Tang credited Professor Crawford and fellow student Garfield Cox with his success, but Crawford had a different take. “It was not Crawford or Cox,” he declared. “It was Tang and Tang alone that spoke and won for Beloit tonight. Mr. Tang deserves all possible credit for our victory.” President Edward Dwight Eaton said of the winning orator, “Mr. Tang is truly a Beloit product.”

Later that spring, C.Y. Tang won a preliminary interstate round against five other states and then competed in the Interstate Oratorical Contest, coming in second place, losing by only one point in a controversial vote. He graduated from Beloit College in 1918 and went on to a distinguished career in diplomatic service and as an educator in China. He remembered his love for Beloit College and both his son, Xiao-Xuan “Edward” Tang, and grandson, De Ming “Eddie” Tang, graduated from the college in 1949 and 1984 respectively. In 1984, the college honored the Tang family with a certificate of recognition which spoke of “long-lasting friendship and international understanding.” 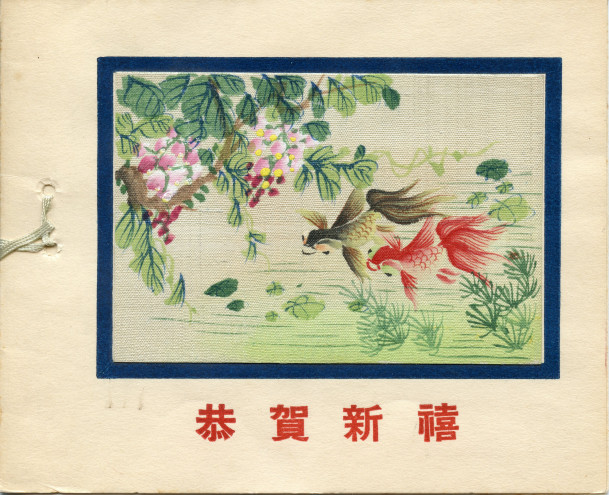 The above is a Chinese Christmas card, from Tang to Beloit College Professor Robert K. Richardson.