HomeLibrary & Information Technology Services Fridays with Fred: Give us a Gymnasium!

Fridays with Fred: Give us a Gymnasium! 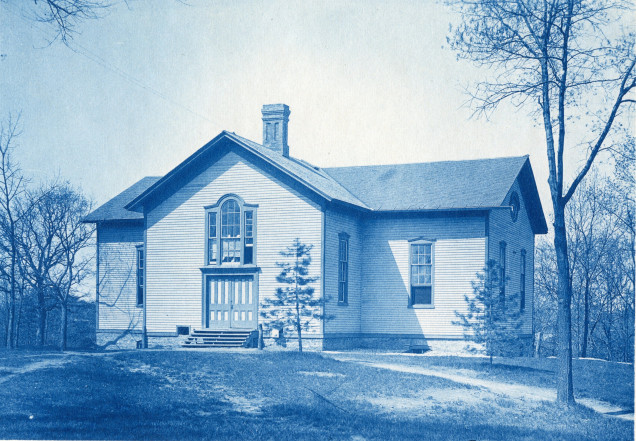 Despite dealing with an intense, classics-based curriculum, despite the strain of austere living conditions, and despite their nearly always solemn-looking poses in vintage photographs, Beloit’s earliest students enjoyed plenty of fun and recreation, especially physical exercise. They took long rambles into the nearby countryside, boated on the Rock River, and skated on its ice in winter. They played cricket and “New York Base” on the college grounds and sometimes received fines from the faculty for tossing a ball too close to precious windows. Unlike today, though, students had no Sports Center, no gymnasium, not even a simple recreational facility. They made do with just a couple of climbing and swinging ropes hanging from oak boughs, a vaulting-bar, and two pairs of dumb-bells. By 1860, students clamored for a new campus building “to meet the present necessity,” as the circular they issued called it. “It is estimated that one thousand dollars, judiciously expended, will provide a building and apparatus,” they insisted, but their plan went nowhere when the Civil War interfered. It wasn’t until more than a decade later that students took up the cry again. In October 1871, a Beloit College Monthly editor lamented:

We have more opportunities and better facilities for sports of every kind than we had a year ago…But instead of inciting a love for manly sports they are used for some other purpose. Now, instead of healthy games of foot-ball, base-ball or cricket being witnessed by a majority of the students, the only things to be seen on our “Campus” are a few Seniors or Juniors playing croquet. Very often they disagree on some intricate point, and then there is such a quarrel and disturbance that the “Sophs” and “Fresh” are generally called away from their games of “marbles” to settle the dispute.

Several months later the Monthly noted, “The want of a Gymnasium is felt more and more every day in our College.” Each Wednesday, after Rhetoricals, Professor Henry M. Whitney ran students through gymnastics routines. A Civil War veteran, he was “a warm advocate of physical culture” and vowed to do everything in his power to secure a gym for the college. Within a month, Whitney and the students formed the “Beloit College Gymnasium Association” and then set out on foot to canvass both college and community for funds. A committee solicited subscriptions from alumni, trustees, and friends of the college. “Give us a Gymnasium,” the students said, “and we shall have more enthusiasm, better recitations, and fewer broken down students.”

By June 1872 the Association had received pledges of over $1,000 and hoped to have a building ready by winter “when we need a Gymnasium most.” Their second circular explained that in order to save expense, the students “mean to do all possible labor.” Within a month, the citizens of Beloit had pledged another $800 and the alumni, $420. The Association hired Egbert J. Folant, a local builder, to draw up plans for a two story building. Sadly, there was insufficient money at hand to begin construction that year, but at last, on May 6, 1873, a spade plunged into the earth on the “bluff due west of Middle College” and construction began in earnest with eager student help. As the Monthly commented later:

Mr. Hunt, the builder…has…given, meanwhile, practical lessons in gymnastics to as many students as desired to acquire muscle and skill in hammering, sawing, planing, &c., always reserving the pleasantest parts of the work for them.

The finished structure looked distinctly handsome, if utilitarian, with its limestone foundation, clapboard siding, and attractive windows offering plenty of light. For a time, though, it seemed that the new gymnasium might stand as something of an empty shell, according to the Beloit College Monthly:

There is no provision yet for fitting up the dressing-rooms, laying the bowling-alleys, building a gallery over one end of the main room, painting, warming, or equipping with gymnastic apparatus. For all these we must look to the future generosity of friends. 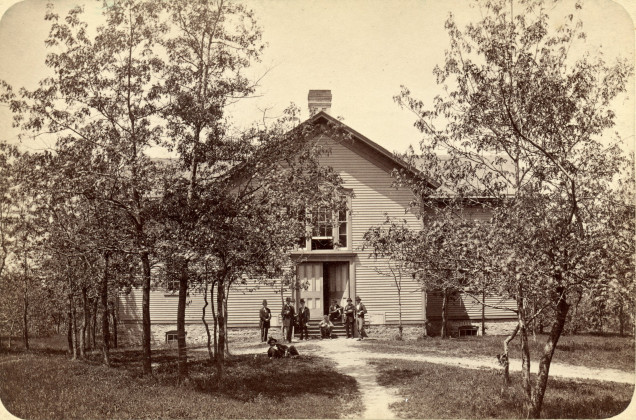 In coming months the college obtained most of the desired “apparatus,” including “a health-lift, a swing-rope and a trapeze.” The Monthly described the “sky-blue ceiling and light-brown walls” as “airy, roomy and inviting.” Over time, further donations added a variety of equipment and, just as important – heat – something even more useful than gymnastic sweat to warm a February day.

In 1903, the “old gymnasium,” as students dubbed it, was only three decades old, but entirely outmoded. By then doubled in number, the student body had an ever-increasing passion for athletics which met with ever-increasing approval by the faculty and administration. Athletics and sports kept energetic students out of mischief and brought recognition and even fame to the college. It was high time for the new and far superior Smith Gymnasium, within a year to rise on the grounds of the older building. Exactly 30 years after groundbreaking for the college’s first gymnasium, students and others assembled to say adieu, as reported by The Round Table:

Classes were dismissed at 10:15 a.m. and all gathered in front of the old gym. The college glee club opened the celebration by singing “Carmen Beloit.” Pres. Eaton then spoke of the occasion and all that it meant. He called on Mr. Thompson of the Senior class to bid farewell to the old gym. Mr. Thompson told of the high ideals that the old building stood for in athletics and said that the new gym must stand for the same principles if it would be successful.

The Round Table speculated that the college might move the old gymnasium down to the river for use as a boat house, or to Keep Field to serve as “dressing and training quarters” during baseball and football seasons. Its final disposition, however, remains elusive, our only reminders a few antique photographs and a legacy of ardent student activism.