Fridays with Fred: The Drawings of Montagu Modder

A profile of a prolific artist, Montagu Modder, and his work at Beloit College. 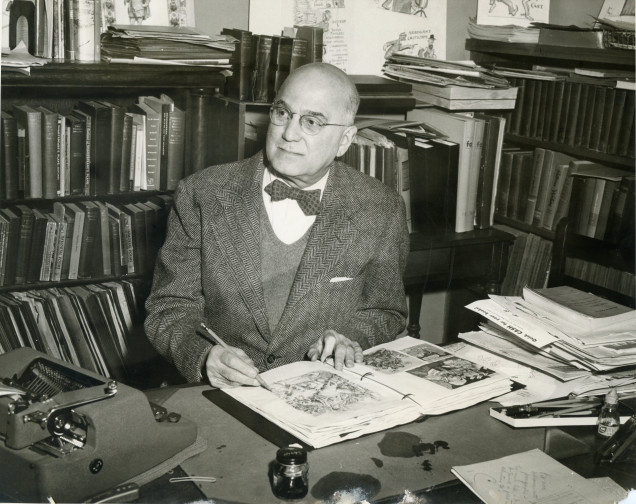 Imagine a 7th century Irish monk, hunched over a stretched sheet of parchment, patiently at work on an intricate design. Text, illustration, brilliant illumination. Many centuries later, Beloit College cherished its own version of that monk in the guise of English professor, Montagu Modder, a devotee of British literature and history, and an accomplished artist. Born in Ceylon (Sri Lanka) in 1891, Modder spent his childhood on a tea plantation before moving to the United States via Ellis Island around 1913. He served in the British Army during World War I, experienced the horrors of war in France, Egypt, Mesopotamia, and India, and emerged in 1918, a confirmed pacifist. He continued his education at Springfield College, Clark University, Yale University, and finally, the University of Michigan, where he received his Ph.D. He arrived at Beloit College in 1935 and in no time he became a favorite professor, famous for his Shakespeare classes and for his keen sense of humor.

On the side, Modder drew political cartoons and other illustrations for local, national, and international publications, including the Christian Science Monitor and Punch. In an oral history interview, his daughter Ann Modder Smith, class of 1958, recalled observing him at work every night after supper:

We had a big leather chair in the den and I remember in the evening wrapping myself in a blanket, sitting there and watching him draw. He didn’t even know I was there most of the time; he was so engrossed in what he was doing. He spent three fourths of his life in his study. He would sketch with pencil. From there he went to pen and ink. 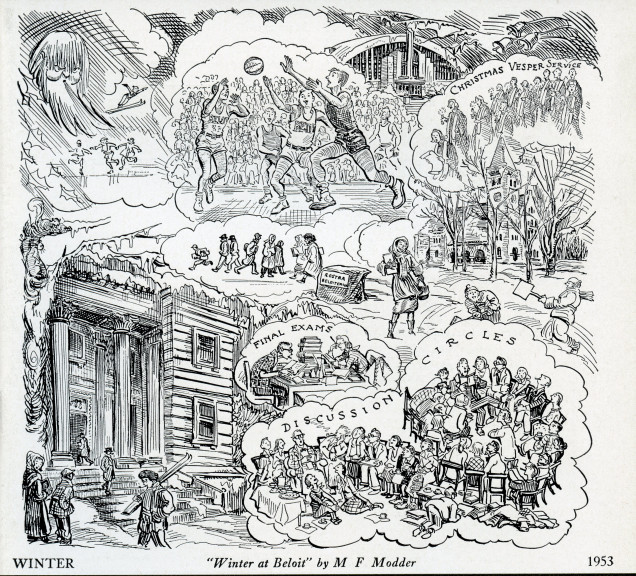 Some of Modder’s work appeared in the Round Table and in the college magazine. In the fall of 1952, the Bulletin of Beloit College, praising his “clever pen work and ingenious drawings,” commissioned him to draw four covers, each representing a season. Beloiters always enjoy contemplating the ever-unpredictable weather and changing seasons, and Modder did not disappoint, with his wind-tossed leaves, Old-man Winter puffing frost, budding trees, and lush grass perfect for picnics. And, of course, as a touch of verisimilitude, he included intelligent looking Beloitian squirrels in each elaborate concoction. He also chose typical Beloit scenes to represent each season. In the fall we cheer on the Bucs as they scramble to another football victory. In winter we bundle up and hurry to classes or hoist skis. Come spring we frolic outside with friends, unless (or because) we’re worried about graduating. By summer we line up in our caps and gowns or greet old chums with open arms.

Montagu Modder retired from Beloit College in 1957 and moved to Carlisle, Pa., where he taught at Dickinson College until he passed away in 1958. Through the gift of Ann Modder Smith, the Beloit College Archives hold a substantial collection of his original manuscripts and drawings, often full color, including several sections of his unpublished history of England, “The Spirit of Britain.” We also have the original artwork for his “Seasons,” allowing us to more closely examine some of the fine details of his quirky, affectionate, visual diary of a year in the life at Beloit College. 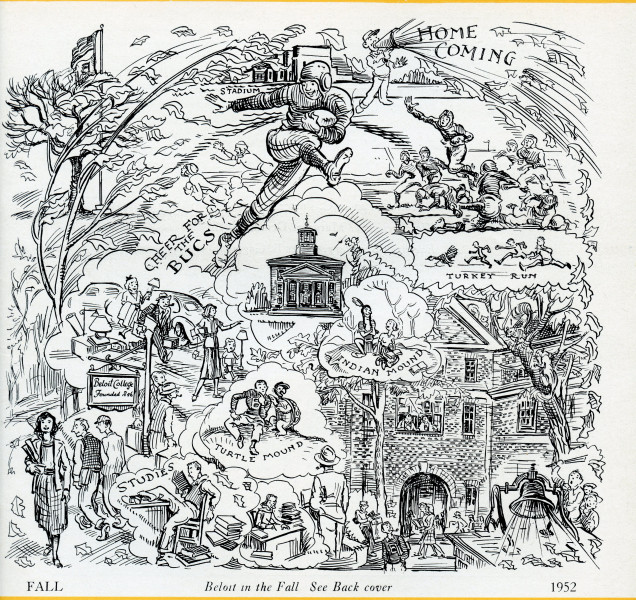 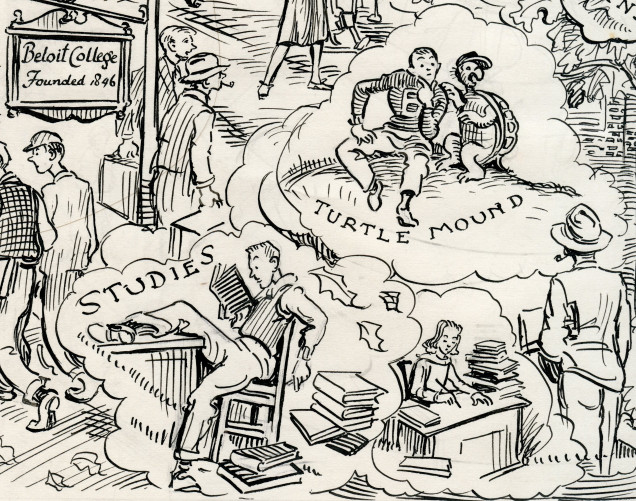 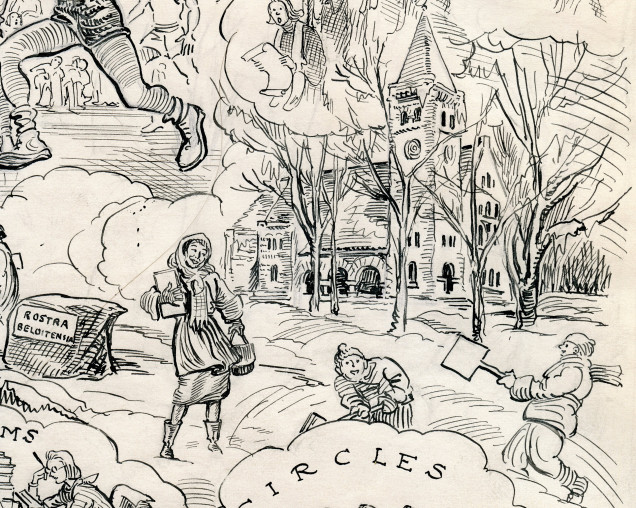 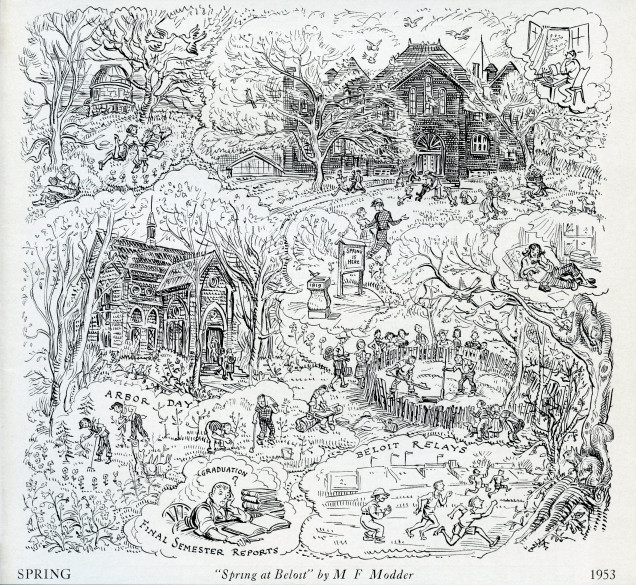 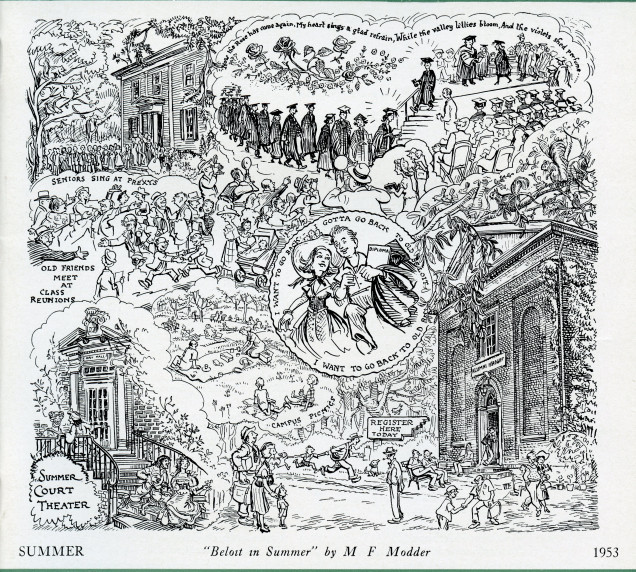 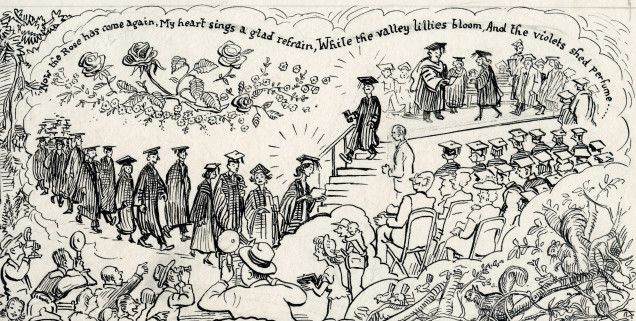