A tale of politics throughout the past century, focusing on one unique socialist. 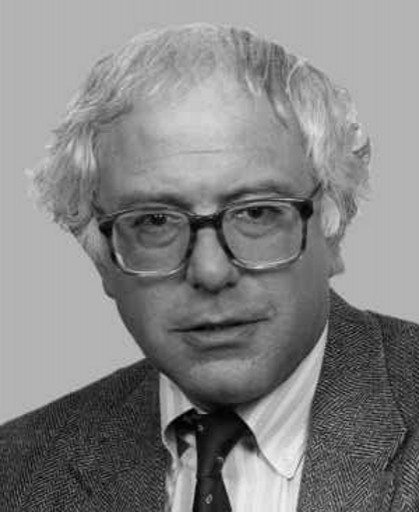 Beloit College students have always tuned into politics, especially during election years. Young Republicans.Young Democrats. Mock elections. Voting drives. The college has reciprocated by hosting political convocations and conferences, and brought in countless politicians from major and minor parties offering stump speeches, party propaganda, and, occasionally, radical ideas. We’ve had visits from future presidents Kennedy, Nixon, Bush (the first), and Obama. And we’ve had visits from numerous presidential aspirants. Of this year’s presidential candidates, however, only one seems to have ever visited Beloit College. Let’s read some commentary from the Round Table:

Another indication of the failure of the democratic ideal…is that “the gap between the rich and poor is growing extremely wide.” He cited statistics stating that the richest 1 percent of Americans owns 50 percent of the nation’s wealth.

Sound familiar? Although his statistics may have changed, the speaker remains on message to this day.On September 21, 1990, at Richardson Auditorium in Morse-Ingersoll, Government Professor, Milt Feder introduced the man he called “a very successful socialist.” At the time, Bernie Sanders had served four terms as mayor of Burlington, Vermont, and was campaigning as an independent for a seat in the House of Representatives. Both the Round Table and the Beloit Daily News covered his visit, although it didn’t merit the front page of either paper. While a photograph of the event remains elusive, it seems an opportune moment to show off a wonderful Dennis Moore photograph of Milt Feder, hemmed in by the glory of his overstuffed office…and loving it. 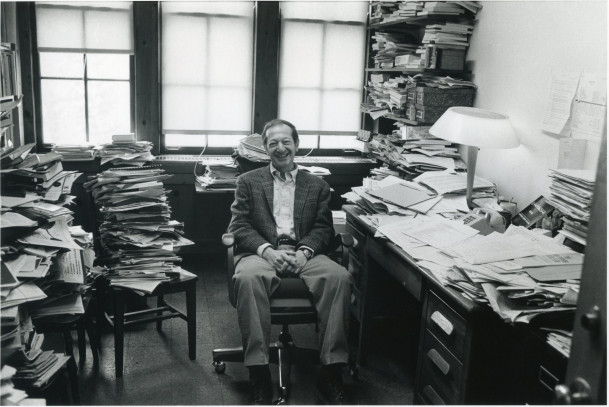 Two campus organizations sponsored the Sanders event, Students Active for a Better Education, and Beloit Students for Social Responsibility. Their combined publicity packed the hall with an eager, receptive crowd. According to the Daily News, Sanders urged the founding of a third party:

What the country needs…is a widespread coalition of peace activists, environmentalists, trade unions and others outside of the Republican and Democratic parties – “to say we are sick of taking handouts.”

He argued that with only a 35 percent voter turnout, “tens and tens of millions of Americans no longer believe or give credibility to the system,” and that among the disenfranchised were the poor and the young, who should be voting, but were not. Sanders compared the 99 percent reelection rate of Congressional incumbents “to that of People’s Deputies in the Soviet Union during the 1950s and ’60s,” as reported by the Round Table, concluding that “the deck is considerably stacked.” He spoke about restoring grants for education and about reviving programs to help the elderly and for those desperately in need of decent housing: “While both the Democratic and Republican parties have failed to fund such issues…they have given billions of dollars in tax breaks to corporations and the wealthy.” He condemned the two parties for their “interventionist foreign policy” and for the deregulation of the savings and loan industry. Sanders also decried the country’s reliance on “30-second ads” as the sum of its political discourse. That lack of thoughtful and considerate discussion had created, he believed, “the most politically ignorant people in the entire industrial world.”

“So what we need is a new political party with a new vision,” Sanders said, calling for “a progressive coalition—a broad-based grass roots movement—to effect change.” That change would mean focusing on “the basic necessities of life.” His proposals in 1990 resemble those of his presidential campaign today, including a national health care plan and significant efforts to combat the ever-rising costs of higher education.

His parting advice: “You gain more in life by standing up.”The Beloiters concurred—with a standing ovation.