Fridays With Fred: Continuing a Year in Time

Part 2 of the series walking through a year at Beloit College.

We return to 1945-46 for part two of our stroll through a year in the life of Beloit College, via a meticulously assembled photograph album, courtesy of the Beloit College News Service. 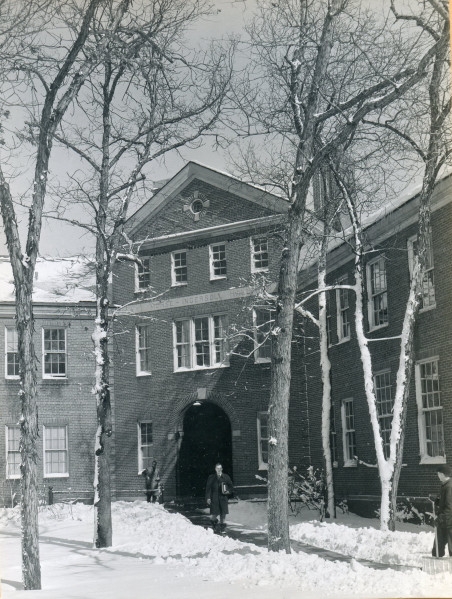 Although this appears to be a timeless photograph of the Morse-Ingersoll arch on a snowy day, in coming years, there would be some noticeable changes. In November 1946, the college dedicated a fountain, placed on the wall to the right of the arch, to Loyll Emanuel Plinske, its first casualty of the World War II-era. A few years later, the class of 1950 donated a wall and plaza, replacing the metal fence and providing space for the ancient Middle College bell. Nowadays, of course, come winter, we hear the roar of snow blowers instead of the rasp of shovels on pavement. Footwear may have evolved, but perhaps in this age of Madmen, buckled galoshes will stage a comeback. 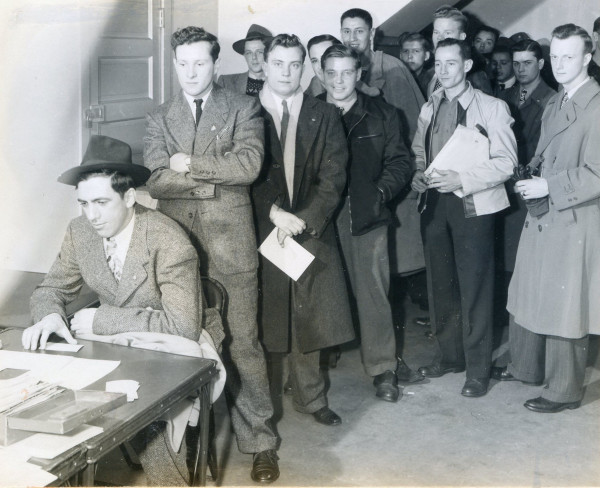 A troupe of would-be actors gathers around the set for a Beloit College production of The Front Page, the popular Broadway comedy by Ben Hecht and Charles MacArthur. Actually, these are among the first wave of returning veterans, registering for the second semester. Within a short time, due in part to the G.I. Bill, the student population would top 1,000 for the first time in college history. 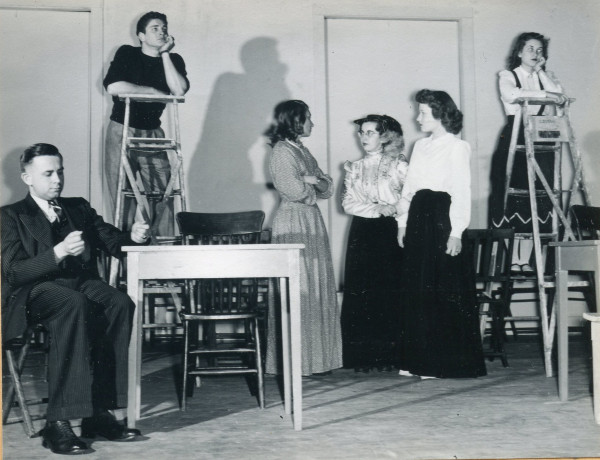 The Beloit College Players usually focused on modern drama. Here they pose for a scene from their production of Our Town, a Pulitzer Prize winner by Thornton Wilder, less than a decade after its debut in 1938. Our Town, which ran for three days in March, 1946, was the first production by newly arrived director, Kirk Denmark, who led the Players and the Court Theatre, a later, professional group, over the next three decades. Stage manager was student Al Barraclough, who returned to the college in 1963 as a professor in the Theatre Department. 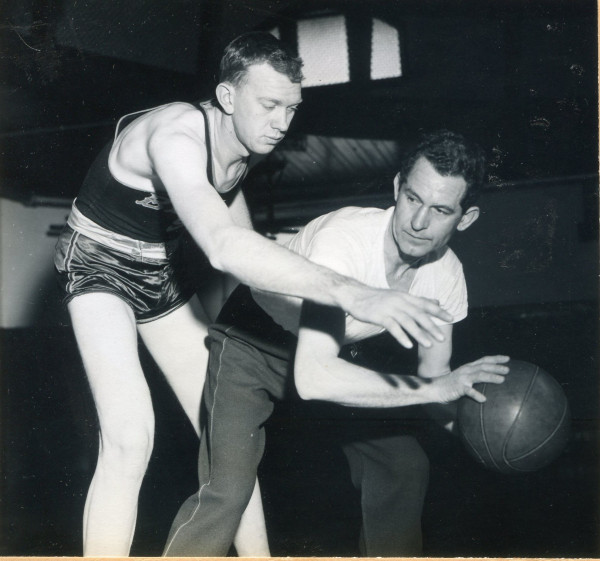 A rare photograph of famed basketball coach Dolph Stanley, demonstrating a move to one of his players. This was Stanley’s first year at the college, after a dominant coaching career at the high school level, including winning the Illinois State Championship with his Taylorville High School team, which went 45-0 in 1944. Stanley brought a few of his Taylorville players to the college and led them to the Midwest Conference Championship right away with an 8-1 record against conference opponents. The Midwest Conference exiled Beloit after the 1950-51 season. Stanley’s teams had managed to win six championships in a row, with an amazing conference record of 46-3. Not long after Stanley’s departure in 1957, the conference welcomed Beloit back into its ranks. Stanley’s teams, often competing against much, much larger schools, had compiled an overall record of 238-57. 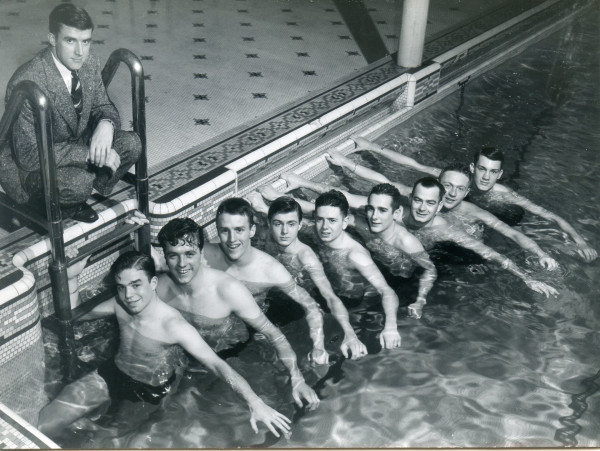 Unlike basketball, swimming was unable to capture local and national headlines and did not have an avid booster club. The team made up for it in enthusiasm, despite having to splash around in the tepid waters of the antiquated (although beautifully tiled) Smith Gymnasium swimming pool. No doubt Beloit swimmers were delighted when the college added a modern natatorium to the Field House in 1956. 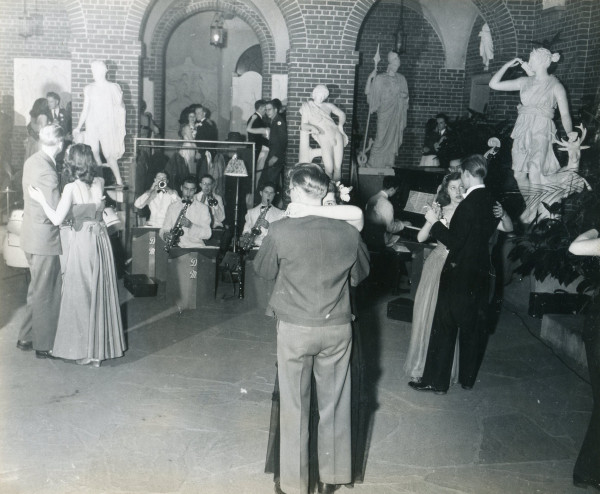 The Wright Art Hall was a popular venue for formal dances, including this one sponsored by the Pan-Hellenic Council, an organization of campus fraternities and sororities. Only at Beloit would the Greek statuary come to life, determined to join in the fun. 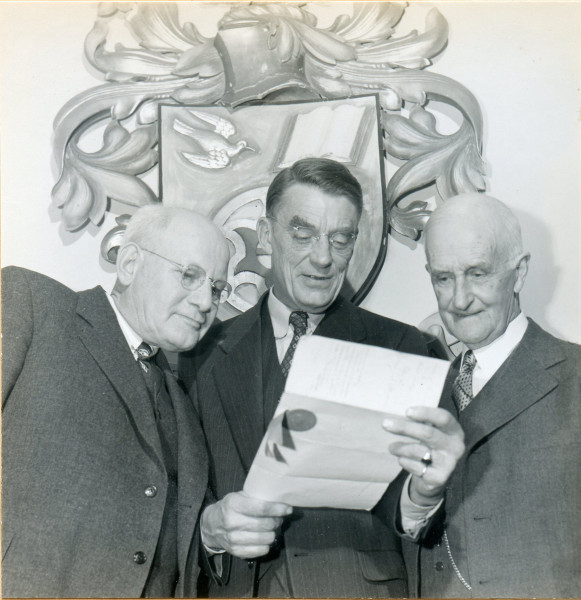 The college spent over two years celebrating its centennial. In early 1946, three descendants of the old guard gathered to read over the original college charter, dated February 2, 1846. Left to right, Emerson G. Peet was the grandson of Stephen Peet, instrumental in founding the college; Lucius Chapin Porter, grandson of first Beloit College president, Aaron Lucius Chapin; and George L. Collie, son of Joseph Collie, who hiked to Beloit from Mineral Point, and enrolled as its first student. 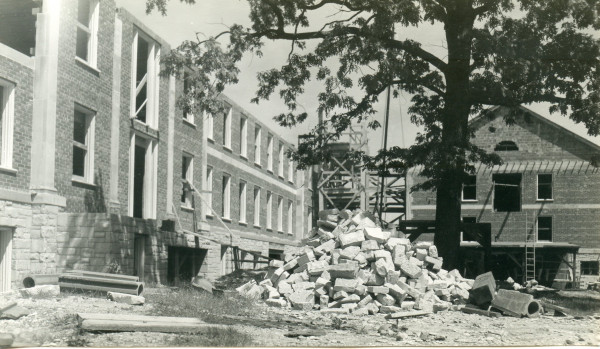 Throughout the year, work continued on the construction of Aldrich (initially dubbed Centennial) and Maurer, residence halls desperately needed to accommodate a rapidly growing post-war student population. The halls were ready for occupancy just in time for the fall semester in 1946.

On May 25, 1946, the popular Beloit Relays returned after a war-time hiatus. Beloit College placed fifth in a field of 16 schools…or 14, depending on the source. 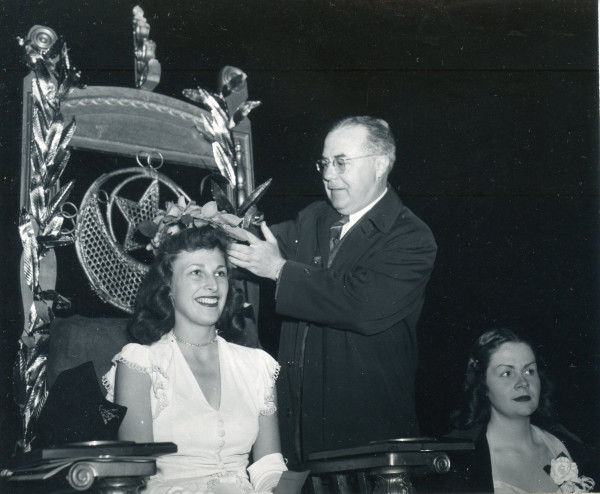 These four girls were chosen by their respective classes as typical college coeds. One of these coeds, chosen by a Faculty committee, will reign tonight as Queen of the Seventh Beloit Relays and will assist in making awards to winners in the meet. 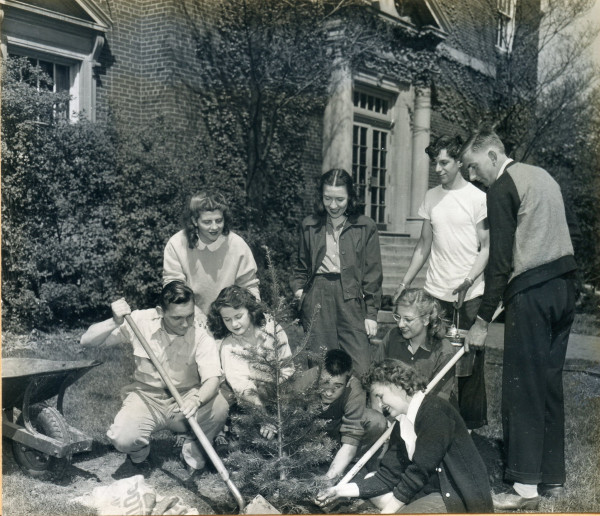 Long before the college’s annual “Spring Day,” students celebrated the season with “Arbor Day,” sprucing up the campus with new plantings, including flower bulbs, shrubs, and saplings, such as this evergreen planted near the Wright Art Hall.

We bring our tour to a close, with an experience familiar to every Beloit College graduate – the Commencement line. The caps and gowns haven’t changed much, apart from the mortarboard decorations in vogue today, but, on that sunny Commencement day, if you stepped off the path, you’d wade through a field of dandelions.