Fridays with Fred: Best All-Around Athlete in the West 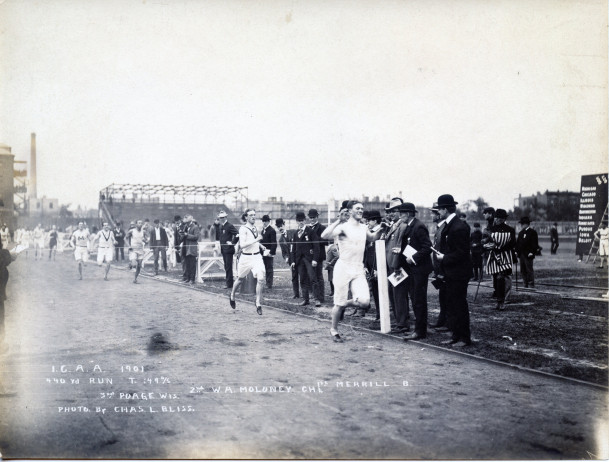 Thirteen runners lined up, waiting for the sharp crack of the pistol. Ed Merrill, from Beloit, exchanged glances with Bill Moloney, the champion sprinter from the University of Chicago, proclaimed by many sportswriters, the finest in the United States. Merrill, recalling Moloney’s disparaging taunts about his abilities at a recent indoor meet in Milwaukee, looked away, and dug in. Over 4,000 fans jammed the sunny grandstand at Marshall Field in Chicago, while hundreds of other spectators leaned over nearby fences, straining for the clearest views of a highly anticipated race. Cheers and huzzahs washed over the runners. A cool breeze fluttered programs, but derby hats were safe. A sudden blast from the starter pistol sent the quarter mile runners churning up cinders at a swift dash, jostling for position. After 50 yards, Moloney was in fourth place and gaining rapidly. Before the 200 yard mark he had passed all but future Olympian, George Poage, of Wisconsin, and Merrill. When the three reached the final turn and began to sprint, Moloney pulled ahead and appeared home free. Ed Merrill thought otherwise. The two raced neck and neck down the straightaway and, as The Chicago Daily Tribune later declared, “Moloney lost strength, wind and heart.” Merrill felt a burble of laughter escaping as he plunged across the finish line with a delighted grin on his face. Merrill had won by ten yards with a time of 49 4-5, breaking the old western intercollegiate record by almost a full second. It would not be Edward Strong Merrill’s only gold medal of the day. 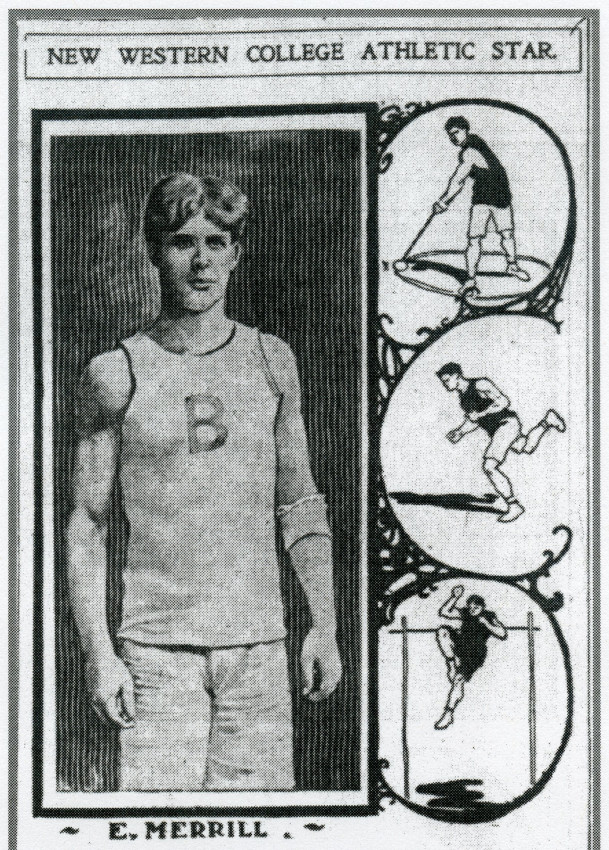 It was something of a miracle that tiny Beloit College found itself competing against 10 much larger “Western” universities at the first annual meet of the Intercollegiate Conference Association, later known as the “Big Ten.” Over the past decade, however, Beloit College had built up a reputation as an athletic powerhouse. The 1901 baseball team, for example, routinely defeated the University of Wisconsin and Notre Dame, and finished with an overall 25-5 record, including winning several exhibition games against a professional team from Rockford, Illinois. The college had also performed well in football. Ed Merrill had starred on both teams, but it was his fast growing reputation as a track star that led to the college sending five athletes to the meet. He’d taken up the shotput for his first intercollegiate meet in 1899, placing first. Then, seemingly as an afterthought, he joined the mile run and managed to come in second. At six foot two, 190 pounds, Merrill hardly resembled the prototypical sprinter, but despite not training with the track team, he ran and won both the 100-yard dash and the 220-yard dash at a meet with Northwestern in 1900, while also placing first at the shotput, second in the hammer throw, and third in the low hurdles. The following April, Merrill earned three firsts and one second against the University of Wisconsin. Clearly, the Edward Strong Merrill legend was well underway by the time he and the others hopped the train to Chicago.

The trial heat of the 100-yard dash was the first event Merrill competed in at the Chicago meet. The Beloit Daily Free Press quoted a Chicago newspaper’s wonderfully hyperbolic account of the race:

“All out for the 100 yard dash” was the cry that sent the blood of the spectators tingling, for, if there is anything a college crowd likes to see, it is the short dash. Immediately the big stands began to hum with praises of the great Michigan sprinters, and a mighty cheer arose when Leiblee, who represented the Ann Arbor college at Paris, was seen to toe the mark for the first heat. Apparently he had an easy thing for as yet the crowd did not know that such a man as Merrill of Beloit was on earth. At the crack of the gun Leiblee was off in a bunch, while Merrill, with his big bulk, had a harder time to gather himself…At the eighty-yard mark the Michigan man led by a yard, but there were yet twenty yards to go, and to a man built like a Colossus, with legs of iron, muscles true as steel, this was more than enough. At the ninety-yard mark the flying Leiblee was suddenly lost to view from the stand as a massive body with broad shoulders and blonde hair swept in front of him like a cloud before the sun. For a moment there was a total eclipse of the dazzling star from Ann Arbor, and then he reappeared again – behind. An electric shock swept the grandstand from end to end, and then a mighty cheer, for a new star had arisen…”

Merrill ran the heat in 10 seconds flat, tying the Western record of celebrated track star, John V. Crum. The Chicago Daily Tribune described “the young Beloit giant” as “a marvel of swiftness.” Sadly, he dropped out midway through the final race, still trying to catch his breath from winning the 440 only minutes before. 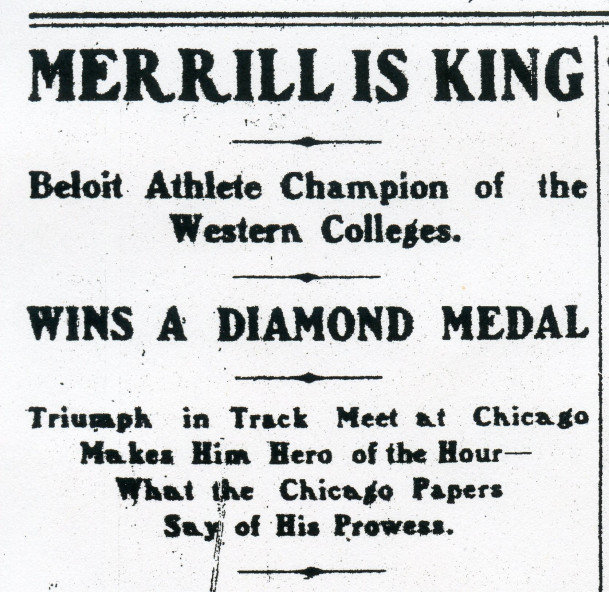 Merrill also won gold in the 220-yard dash and placed second in the shotput. Prognosticators in the press had predicted that at best, “this husky little Wisconsin college” might achieve a grand total of two points at the meet. Of course the punditry had not reckoned on the relatively unknown Ed Merrill, who brought home 13 of Beloit’s 14 points, which tied the college for fourth place with Minnesota. Merrill alone scored better than five teams, including Illinois, Northwestern, and Purdue. His 13 individual points was by far the highest total and netted him a special award, the diamond medal. Within days, newspapers began to proclaim Merrill “the best all-around athlete in the West.”

But what about Beloit’s 14th point? Of the college’s other athletes at the meet, only one managed to bring home a medal. Lucius Chapin Porter, grandson of the college’s first president, had achieved regional fame as a hurdler. At Chicago he won a heat in the low hurdles and then went on to place third in the finals. He continued his athletic career while an educator in China. Back at Beloit in the early 1950s, he was still running hurdles at the age of 73. 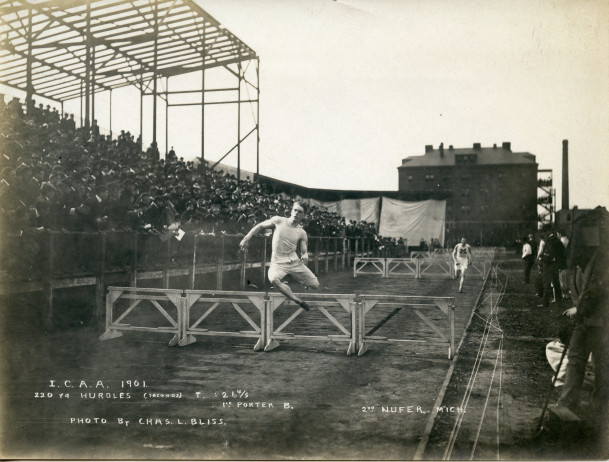 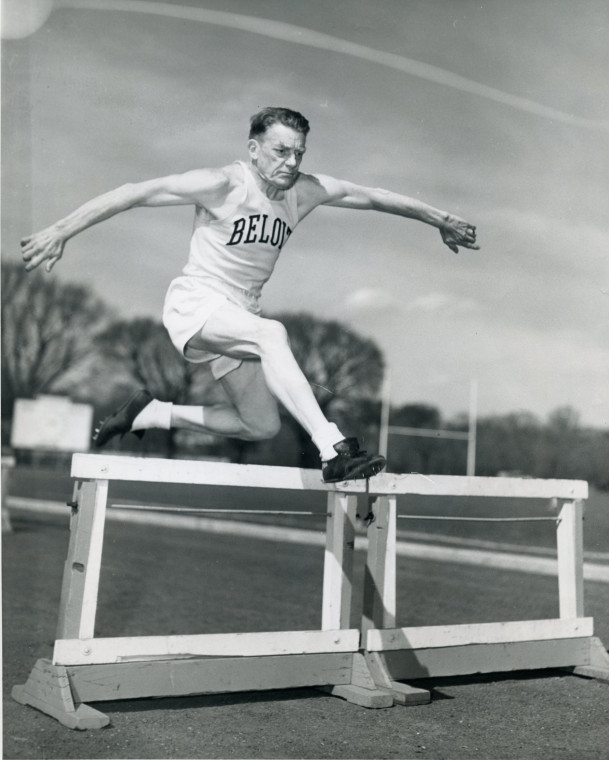 Edward Strong Merrill became a well-known osteopathic physician in Los Angeles. He was the first inductee into the college’s Athletic Hall of Honor in 1963 and joined the Wisconsin Athletic Hall of Fame the following year.