You probably know this history. One hundred and seventy years ago, in the late summer of 1844, a group of visionaries—calling themselves the Western College Society—met aboard a steamer on Lake Erie and, led by Stephen Peet and Aaron Chapin, laid the conceptual foundations of a college to be sited in the new city of Beloit. Two years later, the first students of this fledgling college were receiving instruction at the hands of the irrepressible Sereno Merrill who, himself, had just recently headed north to find a community more amenable to abolition.

But you may not know this. In 1837, seven years before the famous steamer trip, the Kelsou Survey of the city of Beloit—a survey of hopes and dreams, not one of real streets and thoroughfares—calls out for a College Street proudly connected to the public square and just to the east of the Rock River. Nearly exactly where College Street is located today.

Back in November, I spent a few afternoons with the editorial boards at the Rockford and Madison newspapers alongside partners with the city of Beloit and the local visitor’s bureau. We were delivering the latest news from Beloit—news of a successful $70 million school referendum, new retail and corporate construction projects in town, new riverfront projects, new employment from new manufacturing, and powerful momentum behind our Powerhouse project plans.

At the first of the visits, a well-known regional columnist (and longtime resident of the region) asked us, “What’s the secret?” How was it, he wanted to know, that we were faring so well? And more than that, what was with the college and the city’s positive and mutually supportive relationship?

The answer seems obvious to me.

How could it be otherwise when the very first building on campus owes its existence to the extraordinary generosity of virtually every (abolitionist) resident of the town?

How could it be otherwise when the first faculty member of the college, Sereno Merrill, went on to co-found the paper industry in Beloit (culminating in the Beloit Corporation) and the windmill industry (later to become Fairbanks-Morse)?

In an editorial that ran a few weeks after our newsroom visit, the editors we’d met at the Wisconsin State Journal published a piece that threw some confetti at Rock County, the city of Beloit, the college, and our most recent rebound. The article, “Root for Rock County Revival,” ended: “Here’s to more prosperity in the future.”

To the latest revival currently underway in Beloit. To continued renovation. Fast Forward!

From here at Chapin’s desk, on top of which is an 1837 survey of the city of Beloit with College Street smack dab in the center. (I can’t take my eyes off it.) It’s a great day to be a Beloiter. 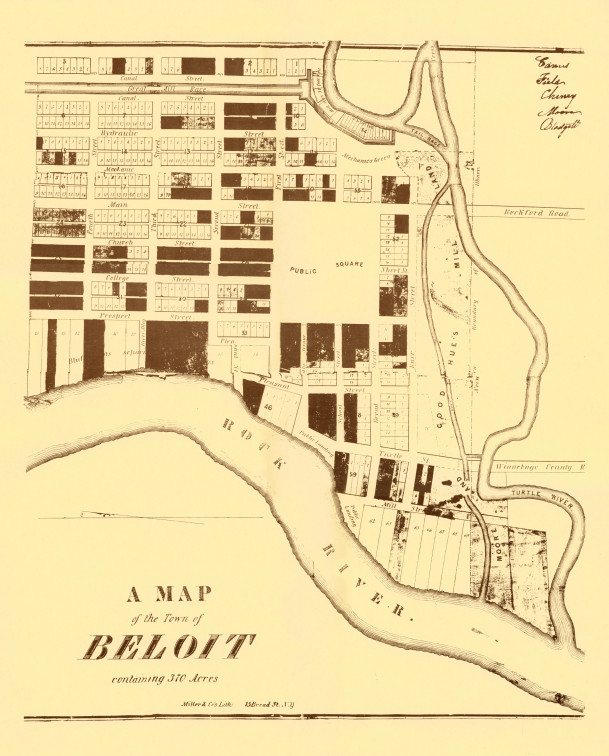