At the foot of my bed is an old, inexpensive black footlocker, with shiny metal trim, circa 1982-83.

It was the same item I had during my Beloit days, occupying a similar place in Bushnell, Chapin, and Aldrich Hall rooms. Today, it holds a number of mementos, including a few typewriter-finished term papers (Hey, those Apple IIs were few on campus back then!) notebooks from Tom McBride’s Shakespeare class, and several of my souvenirs from the Minnesota Twins’ 1987 and 1991 World Championship seasons (don’t laugh, a Twins fan needs something to smile about this year).

Somewhere in my old Belwahsian time capsule is a small, probably two-by-three-inch portrait of McBride. I believe I had cut it out from a recent edition of Beloit College Magazine. The photo was a straight-on shot of the illustrious professor, complete with his usual tousled head of hair. I showed it one day to McBride, nervously asking for him to autograph the image. He did. I then placed it on my cork billboard, which hung on one of my dorm room walls from then until graduation.

What made the image so wonderful, I believe, was what the somewhat intimidating professor wrote on it: Monstrously Yours, Tom McBride.

I have that item somewhere in that footlocker. But more importantly, it’s forever in my memories.

Thanks to Valerie Reiss’95 for the story about the writer Todd Strasser’74. Not mentioned is that he is well-known in Germany under his pen name, Morton Rhue. His young-adult novel Die Welle (The Wave), about conformity, is required reading in German schools, as our children experienced when we lived in Germany.

Readers may find it interesting how he came up with the name Morton Rhue (hints: death, street; German to French). Details are in an article that also tells how The Wave came about: http://scholar.lib.vt.edu/ejournals/ALAN/v35n2/stan.html.

Hats Off to All Donors

My wife and I are listed as donors in the Johnny Pfeffer society (2012-13 Lifetime Giving Societies Honor Roll, published in the summer issue).

As a person who raises money for several non-profits, I would like to suggest some language thanking donors who do not have the means to be one of the 835 people listed. For many of these alumni and friends, their donation may well be a greater sacrifice.

Also, I suggest a bell-run at the 2015 Reunion by members of the 50th year class and photos for the next magazine unless a large donation is secured.

A Network of Global Beloiters

Exploring Landscapes and Rivers in Transition

Thoughts on the Beloit Plan 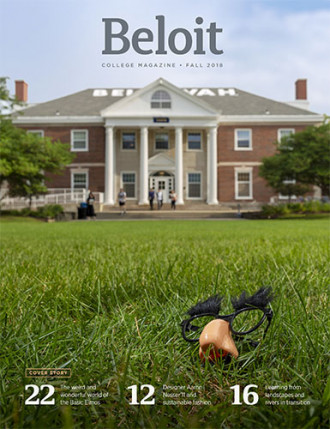 The practical joking, unit-launching Groucho Marx lovers known as the Basic Elmos originated as roommates in 1972 in Chapin Hall, a place the Round Table called “a haven for degenerate slobs.”
Photo by Andy Manis.