Miracle in Minneapolis (and other memories) 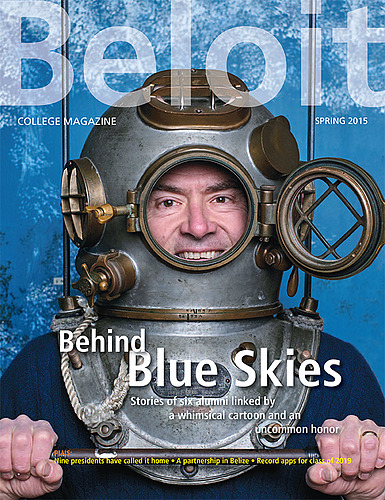 Thanks for the profile of my neighbor, the incredible Sandy Spieler’75, in the spring issue.

People, let me tell you, all of South Minneapolis cherishes the May Day parade she leads—hundreds and hundreds of citizens marching with their home-made puppets, some huge and ephemerally beautiful, celebrating the arrival of spring and its renewed hope. There’s even a community-generated storyline uniting the parade, and a Powderhorn Park ceremony, as a giant sun-spirit crosses the lake to join the revelers.

One person, very humbly, has touched the souls of thousands. Even on cloudy days, the real sun bursts through for the ceremony. Come see this miracle, if you are able.

Another person, David Benjamin’73, brings back my memories of goalpost-ironic Beloit sports (see fall/winter 2014 Last Word). He not only inherited my [sports information] job, I also passed him my off-campus apartment. He paid me back with the charts for a fantasy football card game and sparked my continuing fascination with the works of Robert Coover.

I remember the St. Olaf score as 82-0, and the “hey guys” quote as one I received when I reported the massacre to the Chicago Tribune. I prefer David’s version, as it caps his loving tribute to the remarkable Coach Ross.

Kathy Marchant’73, sorry I wasn’t evolved enough then to pay attention to what was the true import of Beloit sports. As I recall, I spent hours immersed in old basketball box scores trying to tally Ron Bontemps’ exact scoring record. And probably playing David’s card game.

In 1991, I met [ninth college president] Victor Ferrall at an alumni gathering in Phoenix. When he learned that I had started a kitchen and bath design business as my second career, he mentioned that the President’s House kitchen was an inconvenient disaster and needed a complete overhaul.

My husband and I were traveling East in June, and I offered to donate my services to redesign the kitchen. I brought my portable drafting board with me. After measuring the space, I sat in the college library and worked out a design. As I was doing the layout, I discovered that the corners did not align. I went back to check my measurements and found a blocked off central fireplace and chimney that no one knew was there. Vic Ferrall and Linda Smith liked my design and by the end of the four days I had available to be at Beloit, we had located sources for cabinets, counter tops, a remodeling contractor, an electrical contractor, and a plumber. They were the easiest people I ever worked with as a designer. I am so pleased to see that my design is still in use. I hope that the presidents and their wives have found it convenient and enjoyed using it.

Like others I was glad to see the story about the Beloit dreamers. Along with former Beloit Professor Chris Wheeler, I volunteer with several non-profits and faith groups that work to support immigrants, including Dreamers, those facing deportation, and those preyed upon by unscrupulous businesses as well as victims of sexual assault and domestic violence. My recent visit to campus was facilitated by Katia, one of the Dreamers. I was very impressed with the students I met with in the social justice organization and the Outdoor Environmental Club.

I attended two of Pablo Toral’s (political science) classes, and I also attended the day-long Student Symposium, when Beloit students made professional-quality presentations on many diverse topics. Of greatest interest to me was the presentation by students who participated in the No More Deaths Spring Break, where they helped immigrants in the desert who might have otherwise died. The trip and presentation was led by Ousia Whitaker-DeVault’15. Immigrants cross the border without permission for many reasons, including violence and poverty. Obtaining permission is infinitely more difficult for those from Mexico and Central America than those from Europe.

Seeing the article about the portrait of Robert Irrmann’39 reminded me of an interesting aspect of his influence. I was the first of his students to earn a Ph.D. in history and wound up teaching at Eastern Illinois University in Charleston, Ill. Michael Shirley’79 became Irrmann’s last student to earn a Ph.D., and he also wound up teaching at EIU. We maintained a close relationship with Bob in his retirement years in Beloit and Madison. We both miss his friendship and still appreciate his mentoring.