Fridays With Fred: Commencement Throughout The Years

Take a look back at Commencement over the years, with excerpts from past speeches.

It’s a Beloit truism that at Commencement its student speakers often outshine – and out-speak – the dignitaries tendering sometimes unequal doses of platitudes and inspiration. Over the years we’ve heard traditional oratory, listened to comic monologues, poetry and song, and witnessed performance art. One year, mortarboards flew off our heads, rocked by an explosion masterminded by student speakers. Many speeches survive in the Beloit College Archives, but, sadly, not all. Tucked away by date in file folders are hand-scrawled documents in ornate cursive, and photocopied mimeographs (or possibly mimeographed photocopies). For many years, the college magazine published entire speeches or excerpted choice passages. Other speeches live on, at least for now, via grainy VHS footage, shiny CDR discs, and, most recently, as YouTube videos. 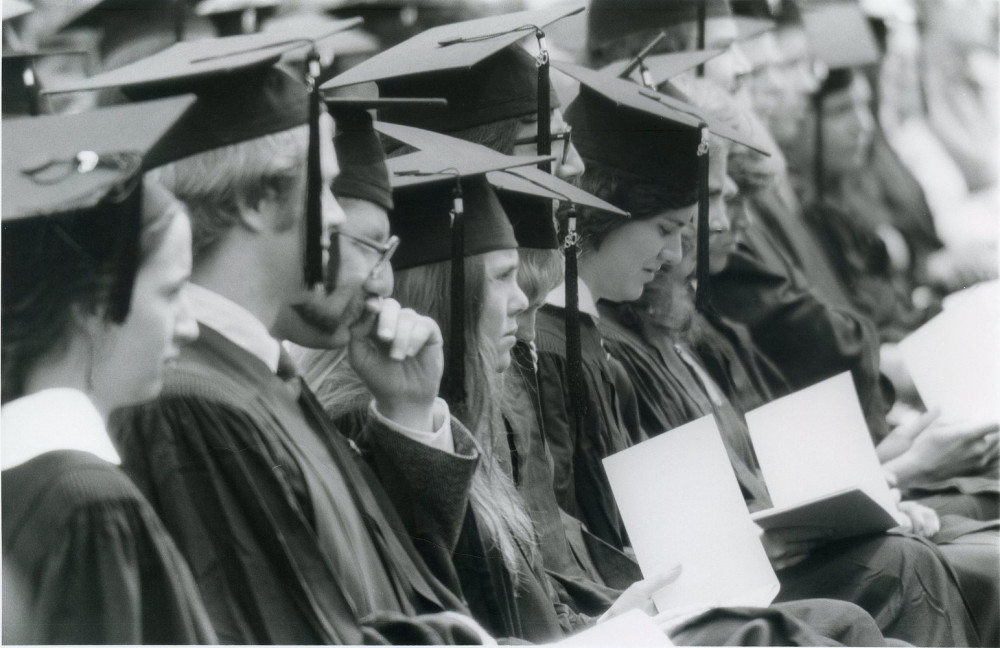 Students seated with their diplomas during commencement, circa 1980.

Student speeches may offer timeless sentiments, reminders of the unique qualities here that hold true and steady for generation after generation of Beloiters. Other speeches, however, capture moments in time, reflecting cultural change and turning points in history. Packed between tooled leather covers, printed on thick cream paper, and with gilt-edged pages, the texts from 165 years of Commencement speeches would surely furnish the weight, if not always the dignity, of a treasured relic crafted by artisan bookmakers. A project for another day, perhaps. For now, let’s contemplate several excerpts from past student speeches – there’s humor, there’s anger, there’s looking back, and there’s restless anticipation, eternal hope for the future. 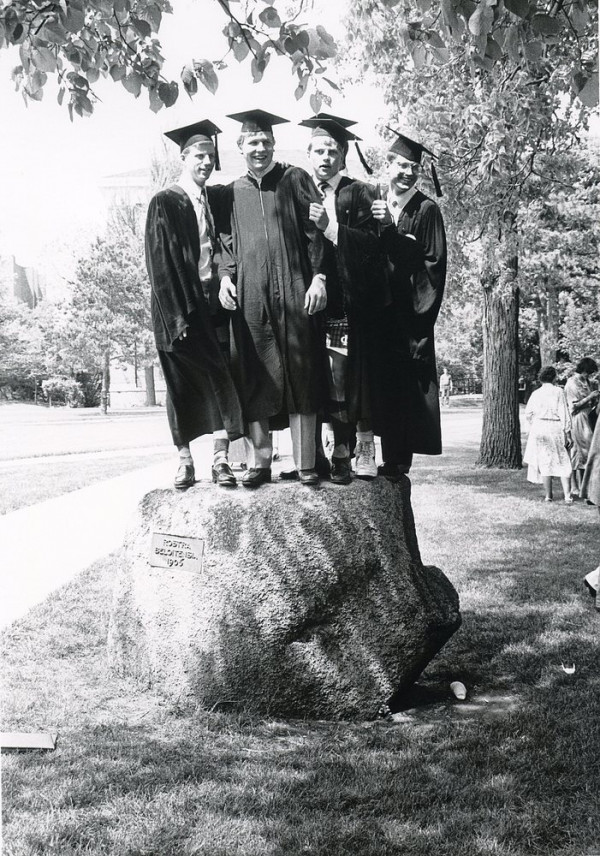 Four students stand on together on the rostra rock, circa 1987.

“A lot of you out there are probably already wondering how a seemingly respectable college like this could wind up with a tasteless degenerate for a graduation speaker. It’s true: I look like a mistake. But it’s not the way I want to look. It’s the result of a serious commitment of moral protest I made to myself a number of years ago. I vowed never to cut my hair until the Cubs won the World Series.” 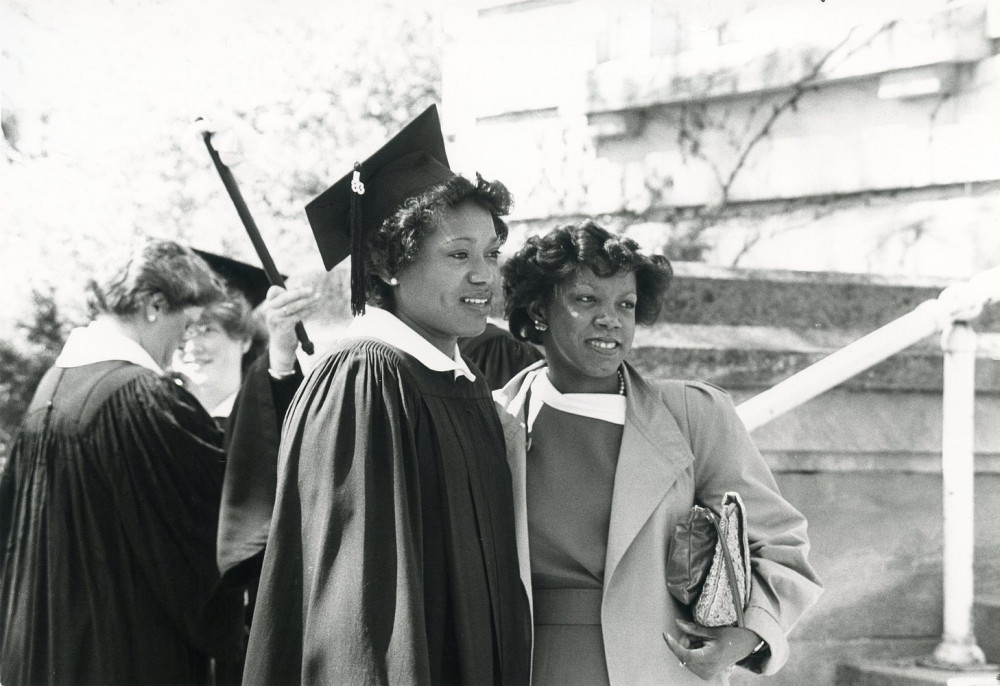 Dressed in regalia, a student and her mother pose for a photo, circa 1982.

“Many of us arrived at Beloit in a similar manner: on a Van Galder bus, as freshmen will next year. When I arrived at the Holiday Inn, 15 eager students and I were met by a wild-eyed woman with keys to a college van, a tie-dyed shirt and a suspect driving record. If college was as exciting as the first van ride to the campus, I was sure that there could be no wrong in attending every single class that I signed up for. I hurriedly exited the van along with the 15 other freshmen and was greeted by a mouthful of small gnats, and a swarm of over-anxious student helpers. These students directed us to our dorms, which I might add would be renamed “residence halls” by the residential life office after the word dorm had become ingrained in our memory…” 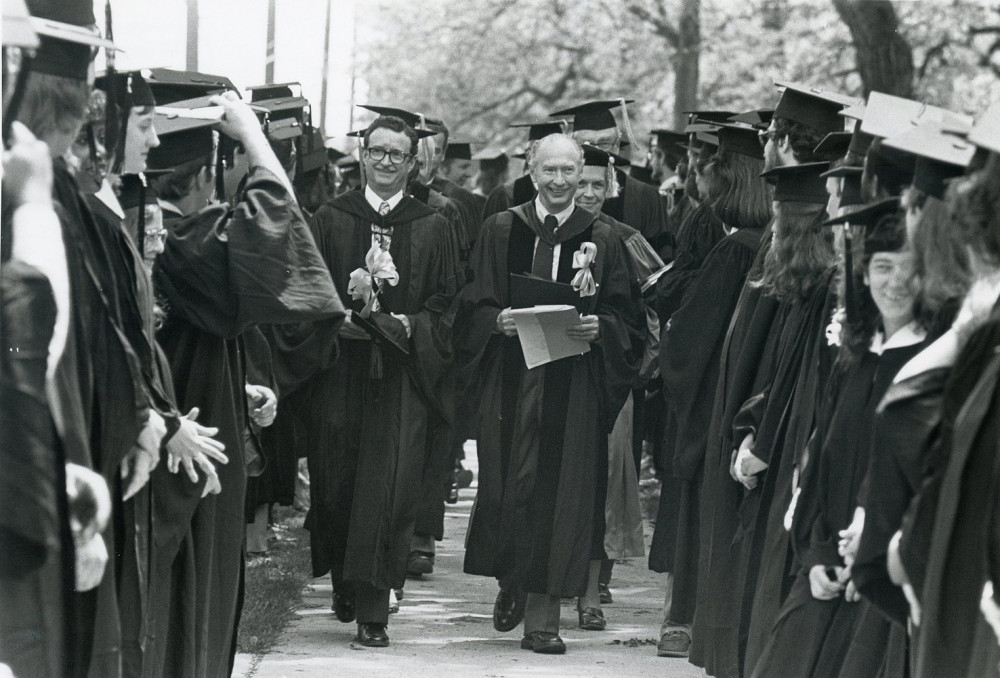 Faculty process through lines of students before commencement, circa 1981.

“But there’ve been some fine times, too. Times when we really felt that we were doing both ourselves and maybe some others some good. Remember the time when we marched on the Beloit Daily News? Maybe we didn’t stop the war, but it seemed like the right thing to do at the time, and there was certainly a feeling of some type of brotherhood between us all. There’ve been plenty of those together days. All-night talks about the world’s problems, heated class discussions, the first dance of the new term. But there was always that one question in the back of our minds: Just what were we doing for the rest of the world by being here at Beloit College?” 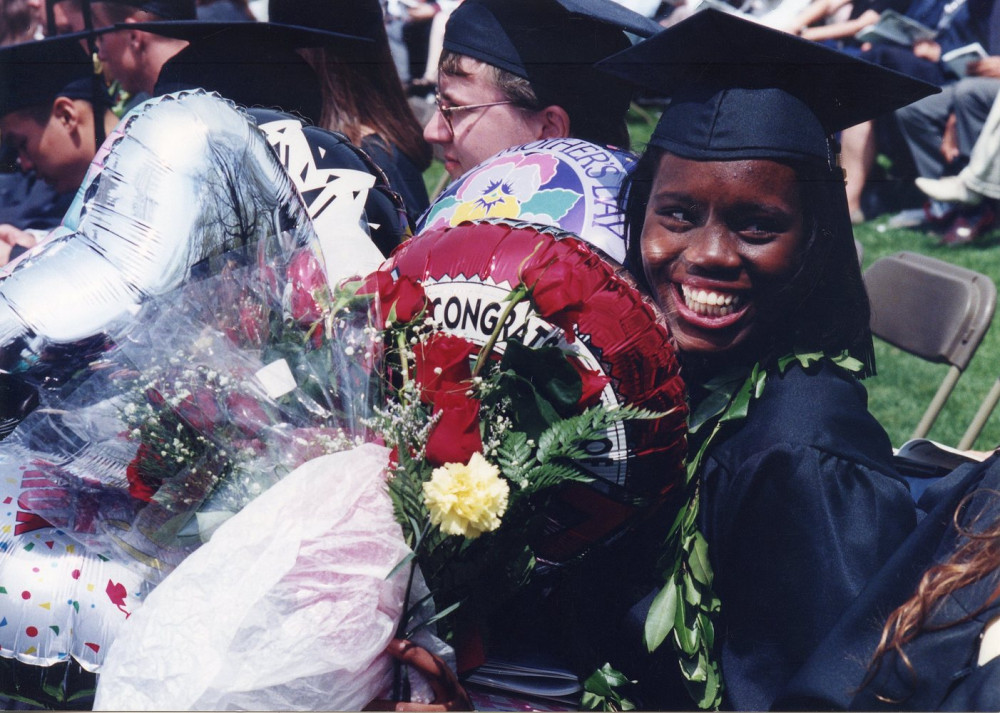 A smiling student buried in flowers and balloons reading “congratulations”, circa 1997

“Only in a small school, such as this, is it possible to obtain the close faculty-student relationship which we have had. This is the basis of Beloit’s contribution. The teas in the Art Hall, where you and I have met informally with the faculty; the school social activities, where faculty couples even seem to enjoy the not-too-enviable task as chaperons; the parties held in their homes; and of course the informal advising sessions in faculty offices – these have contributed the camaraderie that has so enriched our lives. In how many other schools is this relationship possible, or even probable?” 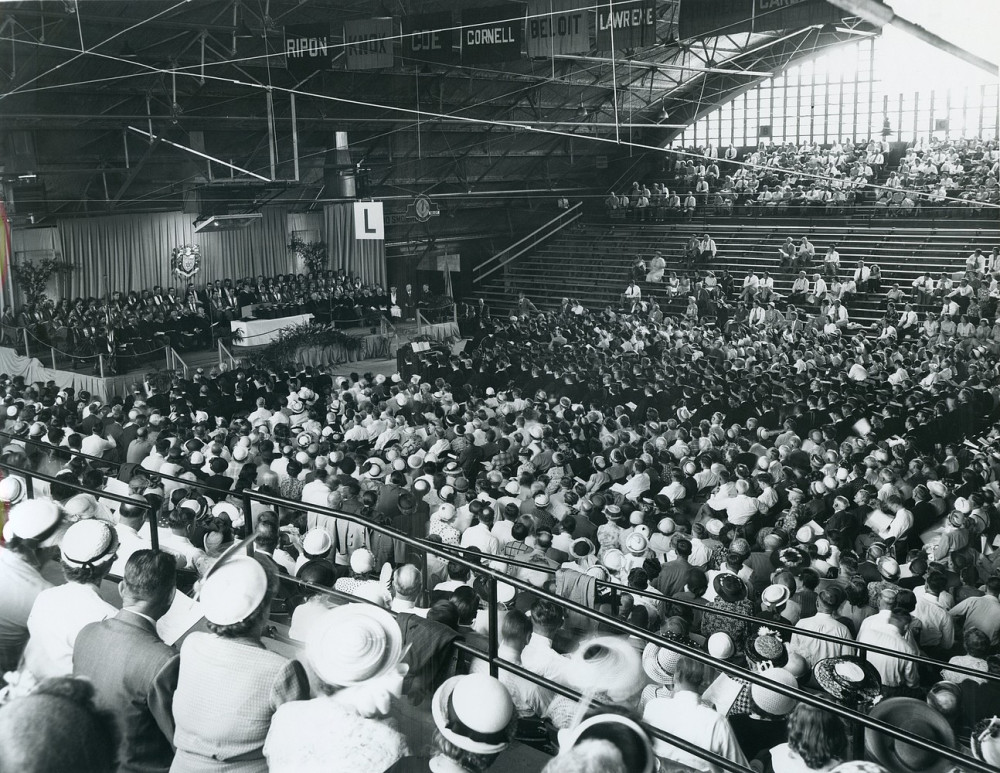 A commencement ceremony in the Marvin Field House, circa 1950.

“We’ve gone to school here, we’re graduating – the few of us who are left – and we are thinking of others of our own class who might have been with us today. Their dreams lie with us. It is for us to take the pieces of this world and mold them into as perfect a whole as our minds can fashion. Our commencement comes close on the heels of victory in Europe. The war with Japan is now at its height, and responsibility rests heavily upon our shoulders. We must make our lives count for those who died dreaming of a better world … In teaching us the art of living together, the importance of each individual, and the necessity and satisfaction of honest effort and hard work, Beloit has prepared us well…” 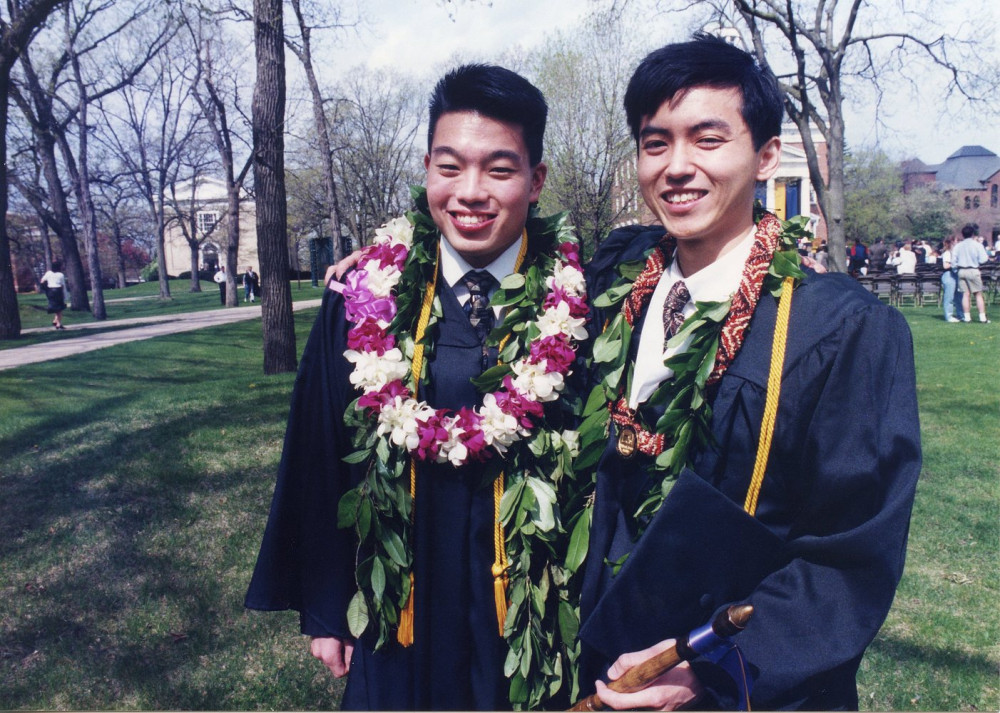 Two students pose together before the commencement ceremony, circa 1997.

“Why are black power students all over the country causing disruptions, taking over administration buildings and presenting demands to their respective institutions of higher education, challenging them to become relevant to all their students and to move into the twentieth century? Why are easy-going, peace-loving people rejecting western values and arming themselves, both physically and mentally, for the race war which they feel is inevitable? Why? Why does America have these problems? This is a question which I am sure you have heard many times and probably have asked in the past few years. Why are situations such as these as I have just described allowed to exist in a land which is abundantly rich in natural and economic resources?” 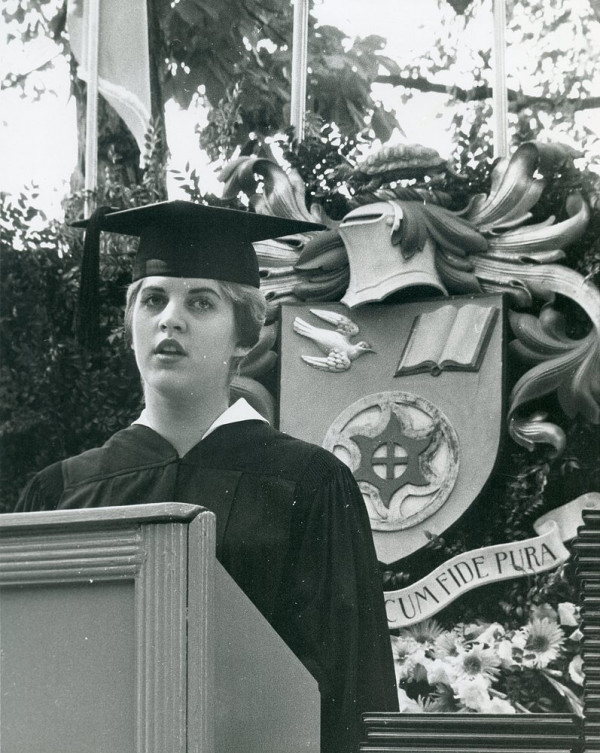 A student addresses their graduating class during commencement, circa 1963.

I suggest that we cannot simply settle for the jobs that our degrees will get us, but must use our educations in far more personal ways;to secure peace and equality; to think outrageous and daring thoughts about what this world should be; to envision a future in which war is questioned, not peace; a future in which human differences are enjoyed, not ridiculed and eliminated; a future in which women are respected, not held suspect; a future in which poverty and exploitation are deplored, not accepted as natural facts of life. 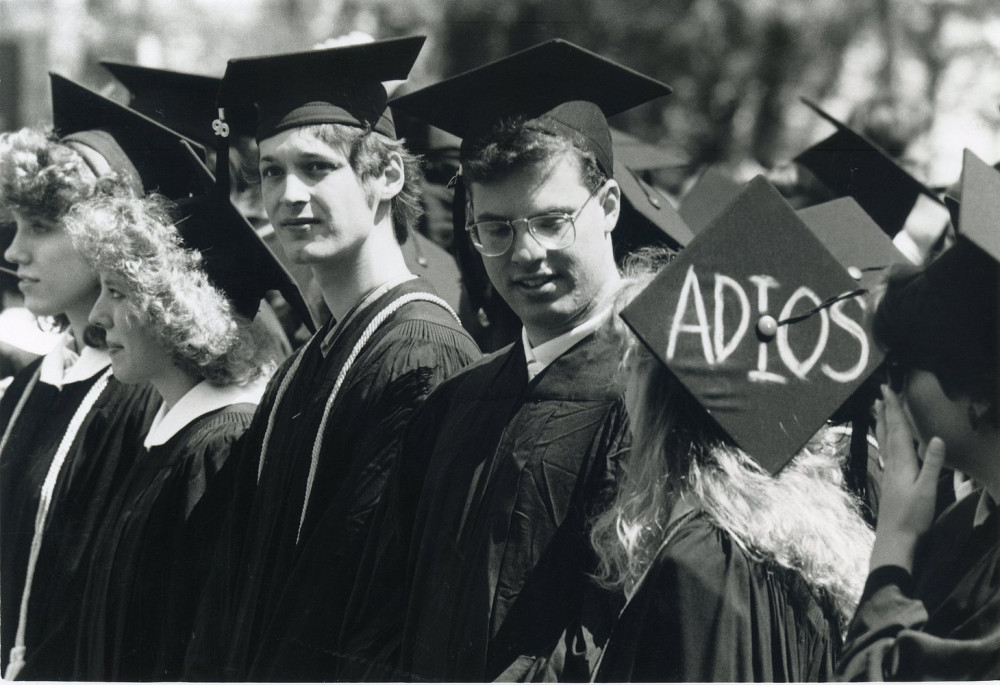 Students talking during the commencement ceremony, one with a cap reading “Adios”, circa 1990.

Today or next fall, each of us will move on from here – except for the few who’ll opt for the ten- or twelve-year Beloit Plan and linger on in the quest of a perpetually pleasant collegiate life … To the rest of you I say, though this exercise be called a “commencement,” none of you today are “going out” into life – you’re already in the thick of it…