To read about Beloit’s Fall 2021 plans, visit our Back at Beloit information site.

Manuel Ferreira has big plans for the Logan Museum of Anthropology. The museum’s new curator of collections sat down with Morgan Lippert’21 to discuss his educational and professional background, his eagerness to mentor students, his plans for “queering” the Logan, and what Beloiters can look forward to in terms of future exhibitions.

Manuel Ferreira received his undergraduate degree from Lawrence University in Appleton, Wisconsin. He initially intended to study music performance, but after taking a course in anthropology at the end of his freshman year, he “absolutely fell in love with it.” This love soon led him to intern the summer after his sophomore year at the Milwaukee Public Museum under Dawn Scher Thomae’86, the current curator for anthropology collections at MPM. “From that moment on,” Ferreira says, “I knew that I wanted to work in museums.” After graduating from Lawrence, Ferreira went to the University of Denver to get his Masters in anthropology with a track in museum and heritage studies.

So why Beloit? “I saw that on the job posting they were looking for somebody who wanted to do anti-racist, equitable, inclusive work,” Ferriera says. “That was the first time I saw a job posting that explicitly said that. And I thought, ‘Wow, I would love to work at a place that takes this work seriously.’” Ferreira also loves the idea of working with students. “It’s these students that are going into these positions and making this change [in the museum field],” he explains.

He also saw Beloit as a place where he could be the “queer, brown role model” he never had growing up in Wisconsin. “I could be in a teaching position where I could bring in new perspectives,” Ferreira explains, “‘queer up the place,’ be myself, show students there’s a place in this field for you.”

When asked about his plans for “queering” the Logan, Ferreira explained that LGBTQ+ histories, lives, and identities are neglected, ignored, and oppressed in museums exhibitions, archives, and collections. “[Museums] curate collections from around the world. Queer people have existed throughout time and everywhere. What’s going on?”

Ferreira’s plan to combat this is to create a LGBTQ+ collections database. It would provide a space for queerness and queer interpretation to happen naturally, serving as a resource for people to incorporate queer identities, histories, and interpretations into exhibits they normally wouldn’t. “The aim is not to label objects as being inherently queer or having a fixed queer identity,” Ferriera explains. “Instead, relevance and interpretation will be at the forefront. Objects and exhibitions will be added to the database not because they are determined to be LGBTQ+ but because someone interpreted them, experienced them as having LGBTQ+ relevance.”

When asked about the Logan’s future exhibits, Ferreira said the first in-person exhibit he’d like to do would focus on the anthropology of fear and horror. “I want us to look at film and use that as a way of looking at culture and history because horror movies are products of their time. And a lot of horror movies use monsters or people or culture as the screenboard for fear.” Other ideas for future exhibits include fashion and cultural appropriation, ornithology, and the cultural influences of Avatar the Last Airbender.

Ferreira also wants to push back against the gatekeeping of the museum field by providing curation opportunities for students and clubs outside of anthropology. “My main goal is to make space for students who are not in the very obvious [museum] tracks. I want to show them that they can come here and curate and create exhibits. You don’t have to be X, Y, or Z for museums to be of use to you.”

This, along with “queering” the Logan, is just one way Ferreira hopes to disrupt what he calls “museum nonsense.” 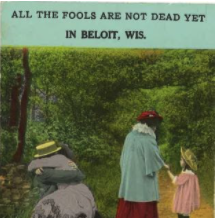 Postcards: Souvenirs and Artifacts of the Past

From Beloit to Budapest to Graduate School