The Wright Museum has received a grant to conserve the largest and one of the most important pieces among its collection of Tibetan thangkas. 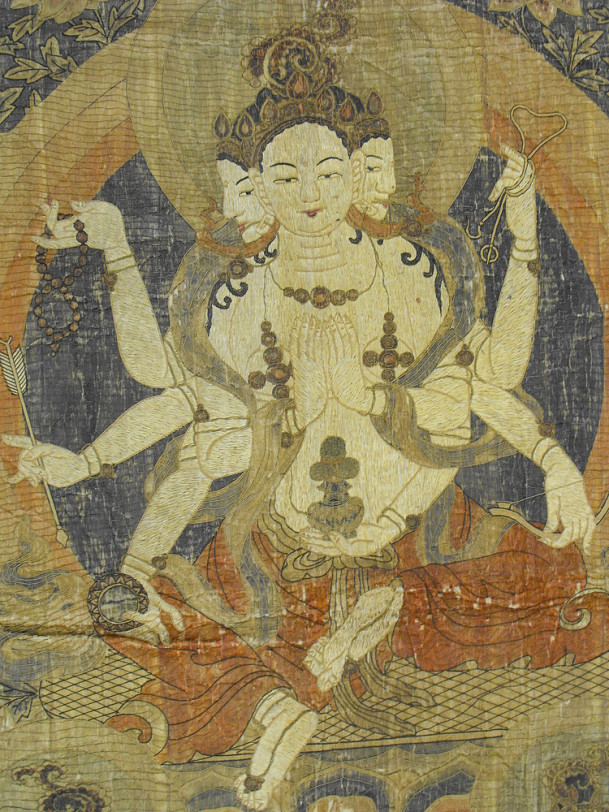 The Wright Museum has received a grant to conserve the largest and one of the most important pieces among its collection of Tibetan thangkas–a thangka is a religious painting depicting a Buddhist icon, and is made of soft cloth allowing it to be rolled up. The Ushnishavidjaya thangka is a large silk embroidered Buddhist icon dating back to the 18th century.

The thangka is 60 by 47 inches and constructed of silk, which over the centuries has become friable (easily crumbled), making it the Wright Museum’s most problematic conservation piece. Last fall, the museum hosted Marion Boyer, a Paris-based conservator specializing in Tibetan thangkas and author of La Peinture Bouddhiste Tibétaine (2010), to assess the condition and propose treatment. Last week, the Wright Museum received notification that the E. Rhodes and Leona B. Carpenter Foundation would support the thangka’s conservation.

The museum received the Ushnishavidjaya thangka in 1912, but for years it lay forgotten in the collection, and only came to light in 2009 during an inventory. Boyer has identified the thangka as representing the goddess Ushnishavidjaya. This icon is rare both in terms of technique and iconography. Most thangkas are painted gouache, but the Wright’s is constructed of embroidered silk. Several of Ushnishavidjaya’s attributes align with the Chinese goddess Guanyin, which also make it unusual. This thangka then becomes evidence suggesting the intimate relationship in the 18th century between Tibet and the Chinese court of the Qing dynasty.

The Ushnishavidjaya thangka will travel to Boyer’s studio Atelier de Restauration in Paris, where over the next year it will be carefully stabilized.

Following conservation, the thangka will return to Beloit, where it will become the focus of an exhibition in the spring of 2021. This exhibit will be the thangka’s first public appearance in many decades and an opportunity to celebrate its return.