Rachel Ellett came upon the vividly colored paintings at a craft market in Lusaka, Zambia.

Among the baskets and beaded items for sale, these works of art stood out as the only objects with a contemporary focus. Inspired by digital, pixelated photos of life in urban Lusaka, young Zambian artist Joseph Lungu had painted striking interpretations of ordinary street scenes on what looked like drapery material. He gave these renderings of modern life a distinctive visual texture in the form of bright, stylized pixel shapes running through the compositions.

Ellett, an associate professor of political science, appreciated how the paintings’ subject matter depicted Africa as a place of the here and now—art that from a Western perspective might be viewed as “less authentic” than traditional ethnic pieces.

She chatted with the artist, purchased two paintings on behalf of the Wright Museum of Art, removed them from their frames, and rolled them up in her suitcase bound for Beloit. 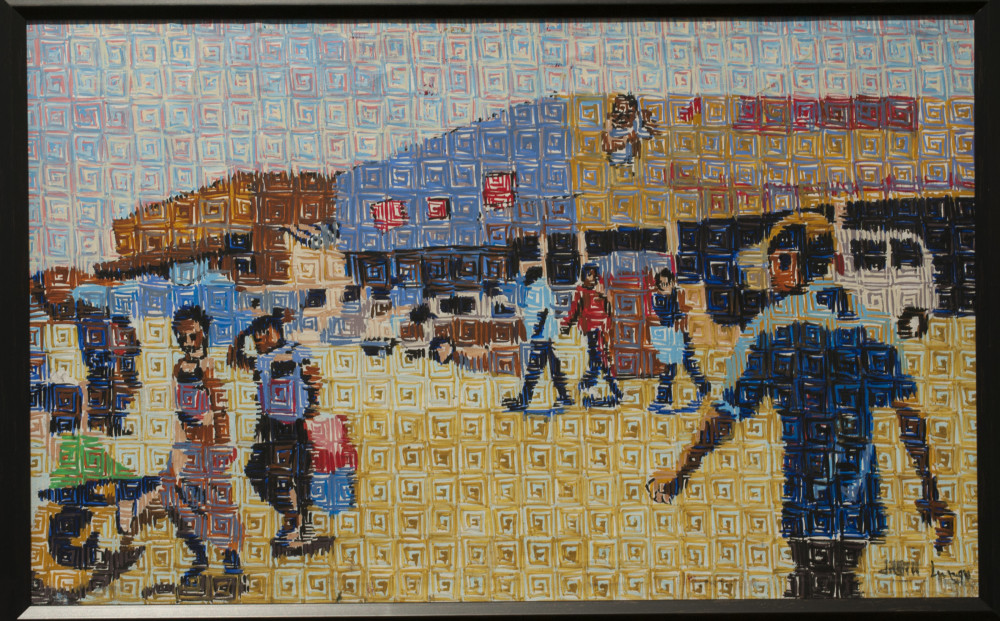 As the Parker Faculty Curator for 2015-16, Ellett had been thinking about how art could serve as a lens through which her students might consider the contemporary African condition. Beyond the case studies, readings, and papers she assigned in this survey course, the curatorship offered her the opportunity to include contemporary art as a form of political communication, a medium for revealing and driving political discourse.

Like a growing number of Beloit faculty members, Ellett is interested in the ways that art can facilitate teaching in all sorts of subjects. She and others are helping to shape the Wright’s teaching collection by working with museum staff to identify and acquire art with relevance to their areas of expertise.

Wright Museum Director Joy Beckman says the museum’s collecting philosophy has evolved to support teaching, first and foremost. “Instead of passive collecting, we’re building our art collection around faculty and student interests,” Beckman says. “What we acquire today is largely driven by teaching.”

The Parker Faculty Curator program was launched in 2012 to complement a major gift in support of art education from George S. Parker, a former college trustee. Typically every other year, Beloit faculty members submit proposals to hold the Parker Curator post. One is chosen for the honor, which offers resources to develop an exhibit component for an existing course.

The art module leads to a student-curated art exhibition, often drawn from the museum’s collection, but sometimes going beyond that, as Ellett’s project did, with financial support from the Wright’s acquisitions fund.

Ellett initially planned on having students work with the Wright Museum’s existing material, but Lungu’s art helped point her squarely toward contemporary Africa. Since Ellett is an expert on the rule of law and politics in Africa, she travels regularly to the continent. She used her connections and travels to identify works for possible acquisition.

“I was pushing the contemporary angle because—including in big art museums—the art we see from Africa tends to be so-called ‘primitive’ masks or carved wood sculptures,” she says. “When I teach Africa at Beloit, I’m trying to push students to think about Africa as being part of the global community. It’s not this other place that’s on the margins, but it’s engaged with global cultural and political discussions, and mirrors patterns of Western material consumption. It’s multiple stories—not just the story of people living in rural villages.”

Starting with the two Lungu paintings, Ellett and museum staff worked together on acquiring the art for “Africa Today,” identifying and borrowing seven works of art from other museums and purchasing a total of 23 prints, drawings, etchings, and posters. 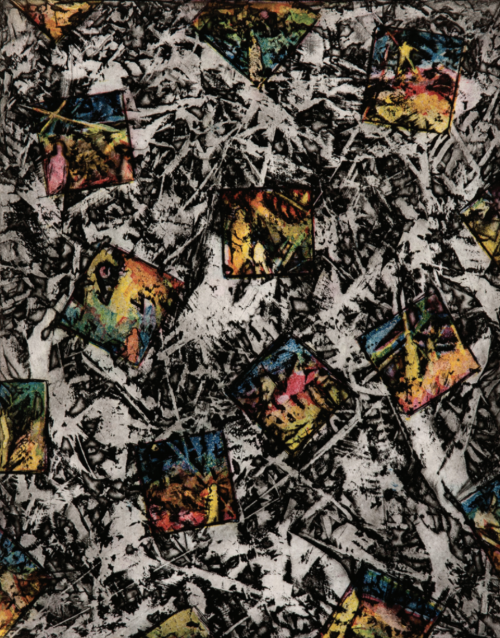 This Land is Mine, Roxandra Dardagan-Britz, South Africa | Madison Oakley’17 studied this abstract painting. “I gained a better understanding of what it means to have a homeland that is altered, divided, claimed, and ultimately taken away,” she wrote. “Seeing the artwork instilled an affective response in me—one that might not have occurred if I just studied definitions.”Students approached their projects by choosing a work of art to study individually. The class collaborated on the exhibit’s thematic focus and arranged the exhibit under three themes: gender and work; corruption and the empty promises of democracy; and land, especially the forced resettlement of black South Africans under apartheid. Every piece was contemporary, created since the year 2000.

Ellett says she had to convince several students that there is no right or wrong interpretation of art. “You see what you see and that’s OK,” she explains. More than anything, she wanted them to connect the art to the topics they were studying in class. “The exhibit was South African dominant, so I was heavily pushing questions of race, gender, and identity in the context of post-apartheid South Africa, the idea that there is now political freedom but not economic freedom,” says Ellett. “Land became a prominent theme.”

Madison Oakley’17 chose to study an abstract painting titled “This Land is Mine” by Zimbabwean-born artist Roxandra Dardagan-Britz, now living in South Africa.

Oakley researched the artist and her work, wrote a required five-page paper, then distilled her material down for the museum exhibit label. “My label focused on the issue of containment inside a vast piece of land, which we discussed in class through the process of colonization,” she later wrote. “The colonization of Africa by Europeans meant that a large continent composed of thousands of different ethnic groups became divided and separated based on arbitrary lines. Thus, ethnic groups that previously had no relation to each other … were unified under the modern state.”

“Africa Today” had a lively opening in November and ran through March 1. Beyond reaching those in her class and visitors to the gallery, the exhibit sparked broader interest among students. Ellett was contacted by student leaders of two clubs at Beloit—Amnesty International and Black Students United—who wanted to learn more about the political context behind “Africa Today.” While the art has since been removed from the north gallery walls to make way for another exhibit, Ellett is convinced that it will continue to ignite conversations and inspire new projects now that much of it is part of the Wright’s collection. She plans to draw on the art for future courses and hopes other faculty members will, too.

“This year-long project has for me epitomized the liberal arts experience,” Ellett said at the exhibit’s opening. “I’ve discovered the ways in which art is able to transcend the categories, the binaries that form disciplinary traps. I’ve been amazed at the delicate, sophisticated, and nuanced engagement with the art by my students—none of whom are art or art history majors.”

Susan Kasten is the editor of Beloit College Magazine. 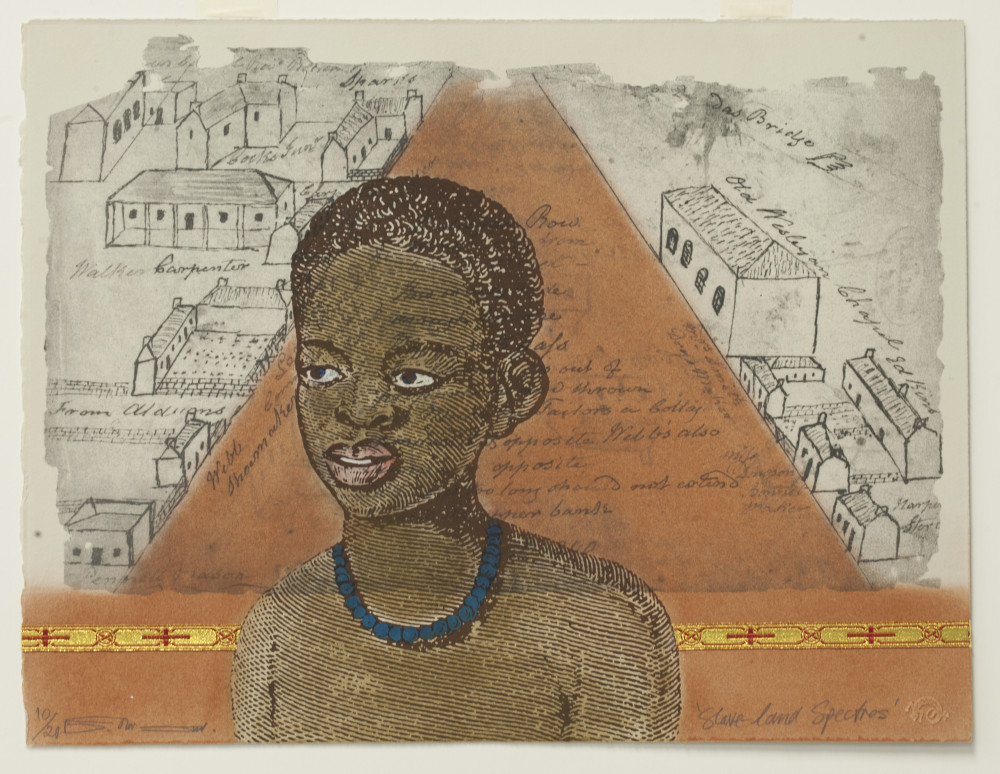 Slaveland Spectres, Dominic Thorburn, South Africa | Casey Bulmer’18 emailed the artist, Dominic Thorburn, as part of his research on this lithograph. Thorburn, a professor in the fine art department at Rhodes University in Grahamstown, South Africa, wrote back, not only about his techniques but also his intentions. For instance, he wrote about the central motif of the child as a way of expressing how slavery is embedded in the history of Grahamstown. “The child, while young is not really innocent, but a victim of a terrible system wherein people were treated as property, and could be owned, bought, and sold accordingly, and could not withdraw unilaterally from the arrangement,” he wrote.

Izindiza Mshini (Flight Mechanisms), Gabisile Nkosi, South Africa 1974-2008 | Students interpreted this 2003 print as symbolizing black South Africans’ attempts to rise above the struggles of apartheid. The central figure remains suspended in limbo despite the official end of racial segregation. Nkosi, whose art also spoke out against domestic violence toward women, was killed in 2008, the result of an abusive relationship. “It's an awful story, but her artwork lives on,” Professor Rachel Ellett says. 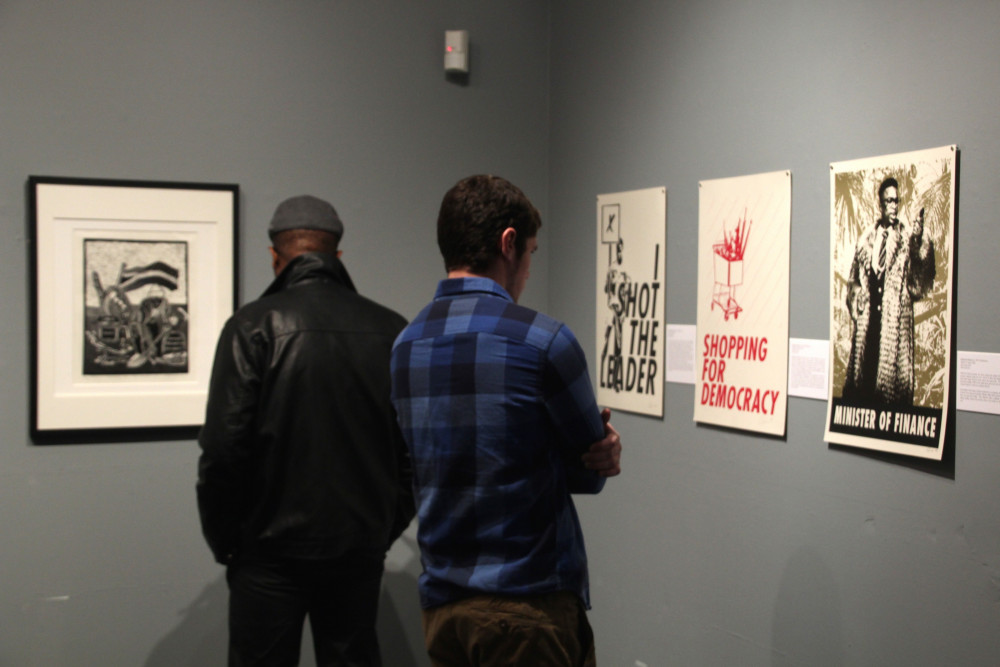 Poster Series, Kudzanai Chiurai, Zimbabwe/South Africa | Gallery visitors take in a series of posters created by internationally known artist Kudzanai Chiurai. The Zimbabwean, who CNN called “the artist who stood up to Mugabe,” is in self-imposed exile for his satirical body of work that levels a direct critique at political corruption under longtime president Robert Mugabe. 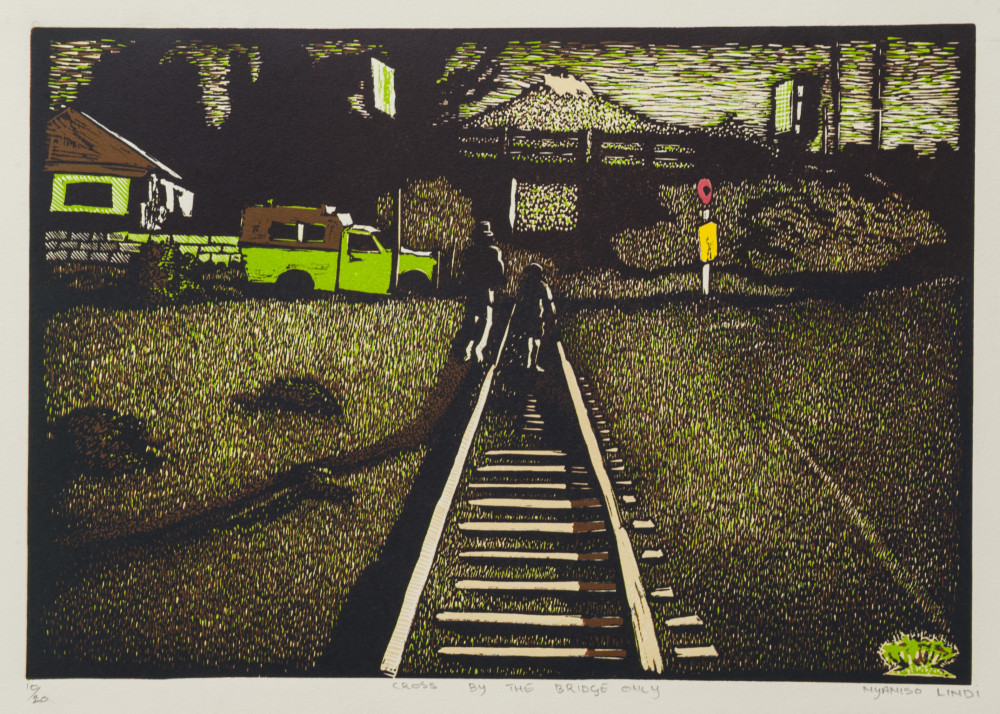 Nyaniso Lindi, South Africa | Students noted the snow-topped mountain in the distance of this woodcut, which echoes Japanese woodblock prints and suggests a destination that is difficult to reach. “In 2003, when Lindi drew this picture, South Africans would have felt disappointment in the face of remaining social obstacles, not only the income gap or education gap but the after effects of discrimination under apartheid.” —From the exhibition label.