Our winter roundup of books created by alumni.

the creation of everything from a simple book of folded paper to more sophisticated pop-up books in which ice cream cones or skyscrapers emerge from the pages. Smith explores the fun and magic that can come out of a few scraps of paper and some glue or a needle and thread. Emphasizing the importance of imagination and creativity, Smith urges her readers to create books without boundaries, books that are repositories for children’s drawings or words or memories.

Author of the best-selling book How to Make
Books, Smith and her husband Dikko Faust are
the founders of New York-based Purgatory Pie
Press, publishers of artists’ books and ephemera.
Smith’s limited edition books are in the collections
of the Metropolitan Museum of Art, the Museum
of Modern Art, Harvard University, and other museums and rare book libraries around the world.

The impetus for this book, however, comes from the author’s own experiences as a child growing up in a creative household and as an artist-parent, showing her children the fun and challenges of making things. “Children do not know they can’t do things,” she writes in the book’s introduction. “This is tough when they are 2 years old. But when you realize it’s their beginning of independence, you can make sure they are safe and give them control of enough to satisfy them. When they are a little older, making things with them is a great way to encourage self-reliance.” 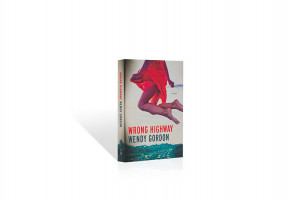 Erica Richards, the protagonist of Wrong Highway, is bright and curious, but also impetuous. When readers meet this suburban mother of four, she is shuttling three kids and an infant around the neighborhoods of West Meadow, Long Island, in an unreliable Volvo and with little assistance from her successful Wall Street analyst husband. Her life, set in the late 1980s, appears by some measures to be outwardly successful, but her path is about to take some surprising turns. “Wrong Highway spins a bored cliché—the disenchanted housewife—into a thrilling exploration of how to grasp meaning in the minutiae of family life,” writes Rhianna Walton of Powell’s Books. Gordon’s fast-paced debut novel is brimming with vivid 1980s details, including selected lyrics by the Talking Heads.

Water Runs Through This Book

“We are water,” Nancy Bo Flood proclaims in her book for young readers, Water
Runs Through This Book, “…we speak to water, and water speaks to us.” Flood explores the pervasive and integral role of water within our bodies, society, and environment. Gorgeous photography by Jan Sonnenmair accompanies her flowing blend of prose, poetry, compelling facts, and provocative questions. While a celebration of the majesty of water, Flood also exposes the struggles many face in acquiring water on a daily basis.

In this novel about students coming of age in the 1950s, Richard Van Scotter weaves together his love for history, sociology, and sport to provide the reader with an examination of social dynamics. Van Scotter, a longtime educator, uses the background of school to dive into a wide array of societal issues and how certain attitudes were nurtured by the social climate of the 1950s. The end result is a poignant narrative that can inform readers as much about the world 60 years ago as it can about the world today.

Beloit College bears more than a passing resemblance to Professor Emeritus of English Tom McBride’s fictional Veloit College. But that’s all part of the fun in Rox & Darlene, McBride’s latest novel. The book follows two Veloit professors, Roxanne Zander and Darlene Surrey (both based on former Beloit professors) as they get wrapped up in a world of political intrigue and bloody violence. Acting as amateur sleuths, the professors make for a humorous and insightful pair. With a cast of characters as wild and zany as you’ll find in any novel, Rox & Darlene provides a thrilling and richly crafted addition to McBride’s prolific output.

The poet Bink Noll was a popular English professor who taught at Beloit from 1953-54, and then again from 1961-1986. Although one of a group of notable American poets who graduated from Princeton University in the 1940s and ’50s, his work is barely known today, and his three published books are out of print. “But for those who remember him or know his work, he remains the Vermeer of American poetry…” writes editor David R. Slavitt. This volume is part of the Memento series, which is dedicated to underappreciated poets. It draws from Noll’s previous books Center of the Circle, and The Feast, and includes the complete collection called The House. “His [Noll’s] obscurity … isn’t his misfortune but ours,” writes Slavitt. An excerpt of “Wedlock,” which refers to a dog:

Now after four years he’s like a wife the way he sleeps with one eye open, reads my mind, learns how not to annoy, and thinks in the first person plural, creature of habit all set to please but also to be pleased …