All the World’s a Stage for this First-Year Student

When new students move their belongings into a room at Beloit College, they carry with them a wealth of jittery nerves and excitement. 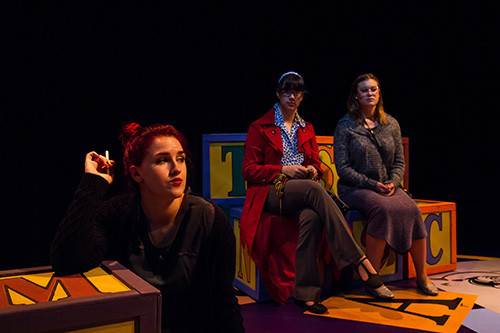 “I didn’t get into activism until a couple years ago,” she explains. “After the Ferguson non-indictment in the shooting of Michael Brown, everyone was going berserk online and choosing sides, and I realized how little I actually understood about the oppression people of color face in this country.”

Politically speaking, everything culminated last summer when Love-Hatlestad traveled to Philadelphia as one of the youngest Democratic National Convention delegates. An ardent supporter of Vermont Senator Bernie Sanders, Love-Hatlestad was photographed by countless news outlets, including NBC News and The Atlantic, using her own body as a billboard for social injustice.

“Since they told us we couldn’t have any unauthorized signs, I made myself a sign,” she told the New Jersey Courier-Post at the time.

Her creative approach attracted the attention of Viceland. “They actually found me at the Democratic National Convention after a photo of my protest went viral and asked if they could follow me around, even after the convention ended,” she explains. “When they learned I’d be transferring to a new college [from the College of Lake County in Illinois], they went nuts.”
A Viceland camera crew tagged along as Love-Hatlestad moved her things into Aldrich Hall, auditioned for plays, and made new friends. It wasn’t much of a burden, she says, even if it did make introductions a bit awkward.

“I loved everyone on that team, so it wasn’t a hard sell by any means,” she says. “It was bizarre, to be sure. That’s definitely not an organic way to start a conversation with a stranger, when you’ve got a camera crew in tow. I was grateful for the experience, but I was also relieved to wrap.”
Since the Viceland cameras departed in late August, Love-Hatlestad has nestled into Beloit quite nicely. After landing a leading role in Baby with the Bathwater last fall, she will play Lady Macbeth in a spring production of Shakespeare’s tragedy.
The theatre is her favorite spot on campus. “Being there is like being in a foreign country and finding someone who speaks your language,” she says.