Studying migration from China to cities in northern Mexico along the U.S. border taught Gisela Sarabia-Sandoval the importance of taking an interdisciplinary approach to research. 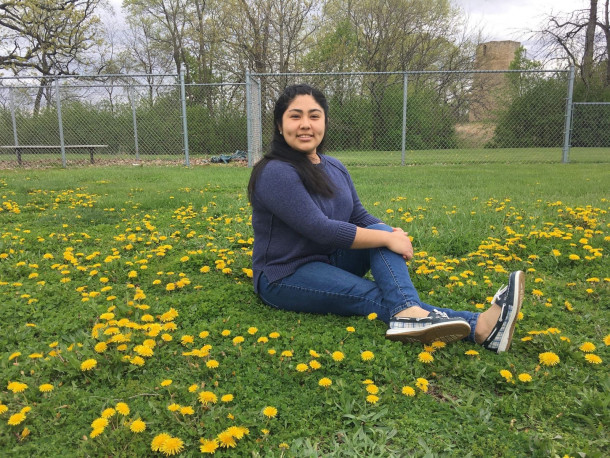 Gisela Sarabia-Sandoval’22 on the Karris Field lawnGisela Sarabia-Sandoval is a first-generation college student majoring in international relations with a focus on Latin American and the Caribbean as well as minoring in Chinese language and culture. She is the daughter of Mexican immigrants and currently resides in Wisconsin. This summer Gisela conducted research on Mexican-Chinese identity resurgence in democratic Mexico under the McNair Scholars Program and the mentorship of Professor of Political Science Rachell Ellett.

Can you tell us a little bit about the McNair Scholars Program and your summer research experience?

The McNair Scholar program is a federal TRIO program funded by the U.S. Department of Education that prepares students for graduate program studies in their junior and senior years of college. The program’s goal is to increase the number of students from underrepresented sectors of society in the professoriate. My research explored the economic, social and political factors that contributed to the migration of Chinese citizens to the Mexican border cities of Tijuana and Mexicali. I did an interdisciplinary analysis looking at how this group challenged the social and political discourse regarding Mexican national identity and mestizaje, such as dealing with xenophobia and racism, from 1910 to 1930.

Why is this topic important to you? Do you think it relevant to the current migration issues we are experiencing in the United States?

I was interested in this topic because it makes visible realities that are often ignored or excluded from our understanding of places and identities. The common conception of Latin Americans does not have associations with Asian people. Yet in Mexico, there was a massive Chinese migration, and these migrants played a very important role in the development of cities like Mexicali and Tijuana, a fact that is not always recognized. It is important to uncover these histories that are not talked about to overcome the legacies of xenophobia and racism.

There are definitely some parallels between the experience of Chinese immigrants in Mexico of the 1910s and current Latinx immigrants in the United States. In both cases, anti-immigrant sentiments have been promoted by the government as an attempt to define the national identity. Migrants are perceived as a threat to these identities, and the country must therefore be protected against them.

What are your future plans?

I hope to continue my research next summer at the PPIA Institute of the University of Minnesota for public policy, where I seek to complete my graduate education.

In the grand scheme of things, I aspire to a career with an international organization like the Organization of American States that promotes democracy, human rights, equality and equity. I want to oversee elections and help to meet the needs of people across the Americas.

What were the most important takeaways from this experience?

Firstly, finding connections between my Beloit College education being interdisciplinary and the type of research I did over the summer. I looked at history books, ethnographies, census data, and political science analysis, which allowed me to gain a broader perspective than that of a solely international relations field.

Another takeaway was how national identity is created. There is always a political agenda behind it, but there are also many cultural factors involved that determine how people buy into the idea.

I would say that the main takeaway is to always question cultural norms and not to take them for granted before understanding how they came to be.

International Friday: The Views from our Windows