Fridays with Fred: multiple views of the Rock River

A look at the Rock River through time.

The Rock River is said to have been named first from the rocky character of the soil through which it flows. There is also a story that early French explorers called the river Rivière des Kickapoo because there was a village of the Kickapoo Indians living on it. In the 1700s it was called Rivière de la Roche, a translation of the Indian word for the river, meaning “river of the rock.” Rocks at the mouth of the river cause rapids.

-The Romance of Wisconsin Place Names, by Robert E. Gard and L.G. Sorden

Pioneer families moving to Beloit in the 1830s and 1840s chose this area because of its fertile land, perfect for agriculture, and because of the Rock River, with its clear, fresh water, abundant in fish and strong enough to power industry. Today we often take the river for granted and hardly notice it as we hurry along to business downtown or out of town. Sometimes, however, we gaze in wonder as a fiery sunset burnishes the flowing water, sparking gold and crimson. On a stormy day, the water reflects gunmetal gray and the previously gentle wavelets turn fierce. Many of us relish a meandering stroll through Riverside Park or crossing the Wood Family Fishing Bridge for a lunch break on the far shore. For the most spectacular views of the river from campus, we climb the stairs to third floor Pearsons, or better yet, roam the green roof of the Science Center.

“Rock River rises in Fond du Lac County,” an 1856 edition of the History of Rock County tells us, “and runs south, through Dodge, Jefferson – the towns of Milton, Fulton, Janesville, Rock and Beloit, in Rock County, into Illinois; thence into the Mississippi at Rock Island.” The 299 mile stream has inspired photographers for well over a century and the Beloit College Archives provides ample evidence of that inspiration, from panoramic and scenic views to snapshots and postcards. In celebration of spring-at-last and as a photographic tribute to the ever-flowing Rock River, we’ve plucked a dozen beauties from our files.

An enterprising photographer in 1889 hauled his cumbersome equipment up to a platform near the top of the new limestone water tower, set his camera facing north, snapping a gorgeous view he entitled “Up the River.” Here we have a vision of Riverside Drive as dirt track, railroad tracks beside it. Stands of poplars serve as a windbreak for the farm to the left. Big Hill looms in the distance. In the mid-1930s, as Beloit expanded its borders, the city built Riverside Park and tamed a natural wetland, which became the popular lagoon, minus, of course, the muskrat hutches. 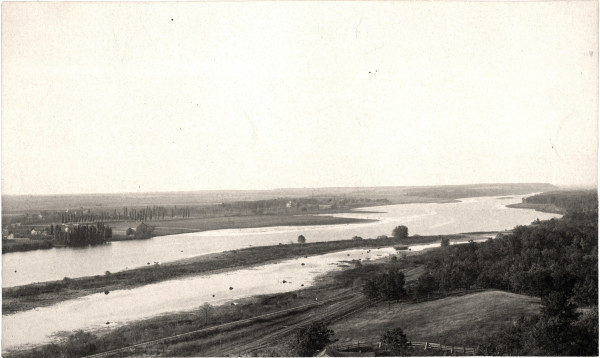 Gifted amateur photographer, Herbert Gaytes, Beloit College class of 1893, took many lovely photographs of campus buildings and nearby locales, among them this view of the river facing downtown Beloit, with several college buildings evident in the distance, including Pearsons Hall, Eaton Chapel, and Middle College to the left and Smith Observatory and Memorial Hall at center. Right-center features the old First Congregational Church and Strong School (razed in the 1960s). 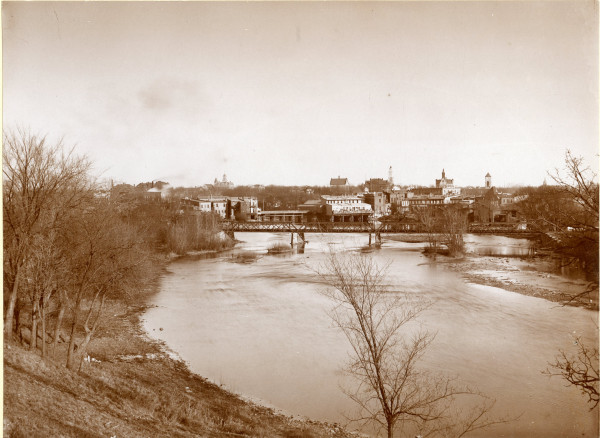 Gaytes captured another river view, this time facing the other way, with the Brown Swiss building and the college at center, the site of the future Powerhouse to the left, and a paper company (later Beloit Box Board) to the right. 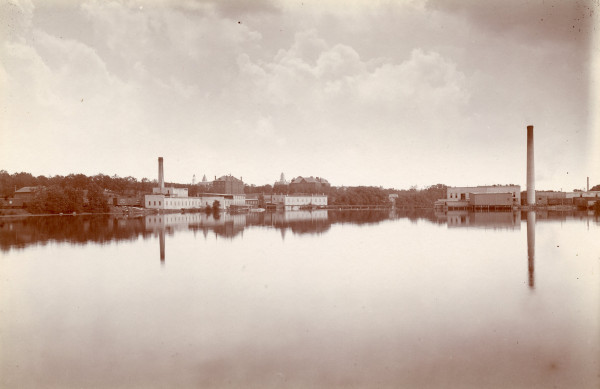 This view from the Middle College cupola dates from around 1890. Within a couple of years, Pearsons Hall would rise to the left and old Chapin Hall to the right next to North College (Campbell Hall). By then, students also had to find another field for baseball. 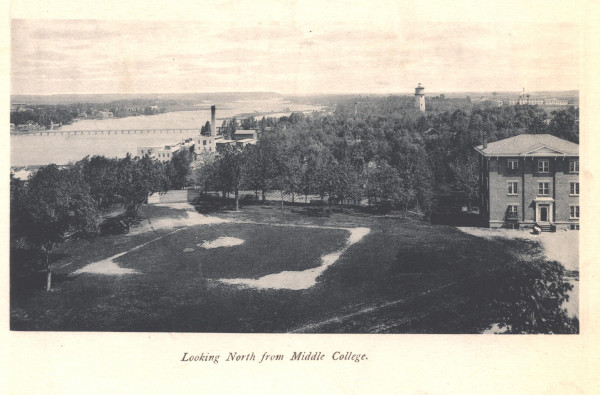 Come early spring, as its winter ice breaks up and as snow melt swells its waters, the usually gentle Rock River sometimes threatens its banks and pushes its dams to the limit, as effectively captured by a photographer around 1910. 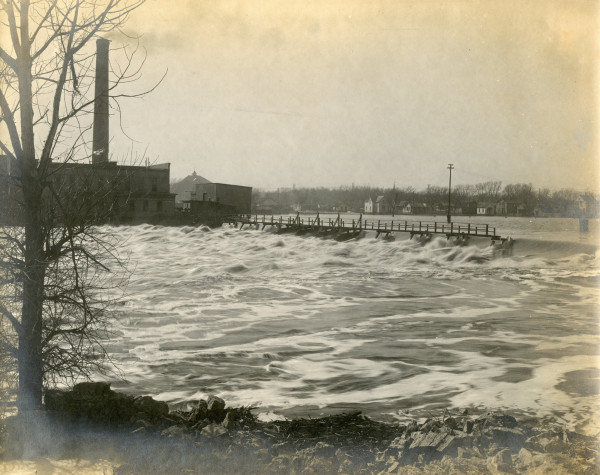 During the first half of the 20th century, postcard printers and collectors loved the Rock River. Among countless depictions, this view from circa 1909 features the old limestone water tower, constructed in 1889 and a canoeist near the “upper bridge” which we know today in its reconstructed form as the Portland Avenue Bridge. 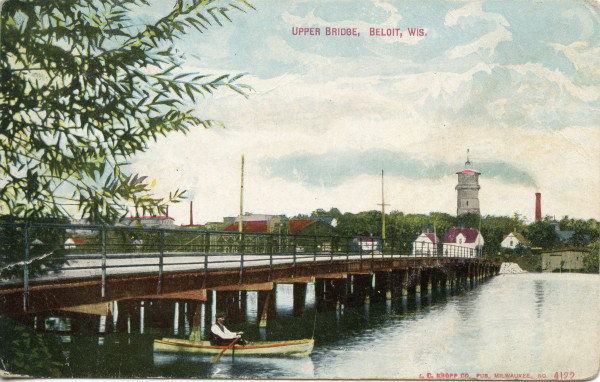 The city of Beloit developed Riverside Park in the mid-1930s. This linen-style postcard of the sunken garden dates from around 1940. 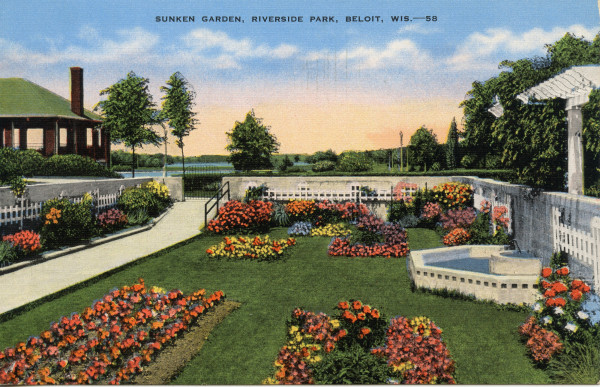 Beloit College had its own sailboat fleet in 1962! 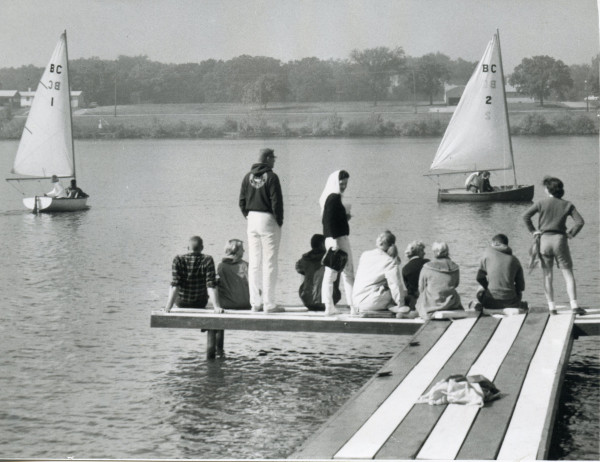 Another lovely river view by Herbert Gaytes, this time from the overlook at Big Hill. Eventually, the city would install a ski slide and allow motorcycle racing on the hill, but well past those years, in 2014 we can contemplate almost the same placid scene that hikers enjoyed in the early 1890s. 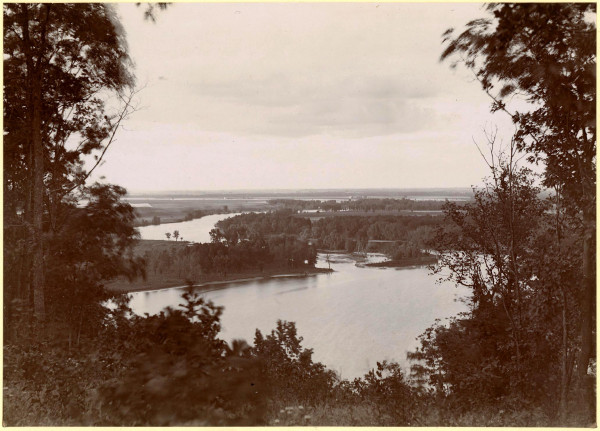 In 1889, six years before coeducation, Beloit men took their dates on a Rock River excursion to Big Hill. There, in a clearing surrounded by venerable oaks and maples, they tried to impress the women with their intellectual prowess by reading from the Athenian tragedy, Alcestis. 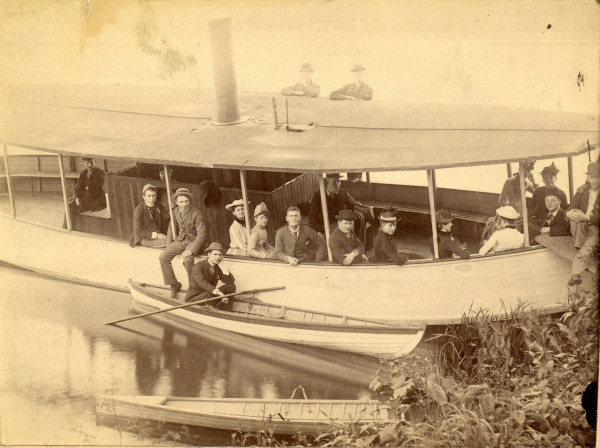 Generations of Beloit College students paddled or rowed the Rock River, with Big Hill or, as in this photograph, Yost’s Park, favorite destinations for picnics. Ethel Bird, class of 1905, described one such outing in a letter home, dated June 1, 1902:

The river was so pretty and the shores so green and “blossomy” – there were quantities of wild roses all the way up…There were a great many boats up the river. One crowd of freshmen we hailed with our bell and so surprised them that they nearly fell over board…Supper over, we “pushed out to sea” and floated for about an hour. Watching the changing lights on the river as the sun went down, reading aloud, & “gin’rally” enjoying life. The afterglow which was beautiful over the river, lasted till we were almost home. 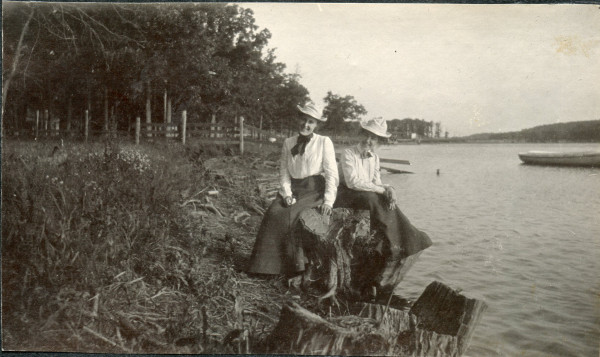 A couple of other students spent vacations on the Rock River, paddling for miles and miles in their canoe, camping along the way. One of them, Lloyd Ballard, class of 1911, chronicled their adventures between the pages of a photo album. Along with views of passing scenery and of their campsites, Ballard captured one example of an entrepreneurial industry which apparently flourished from about 1900 through the early 1930s –clamming. Ballard captioned this image: “Clams! The River was lined with persons of every description fishing clams.” Clothiers manufactured buttons from the shells, but there was also something of a “clam rush” as locals along the river began to discover high quality pearls, lauded as “Rock River pearls” by jewelers from as far away as New York City. 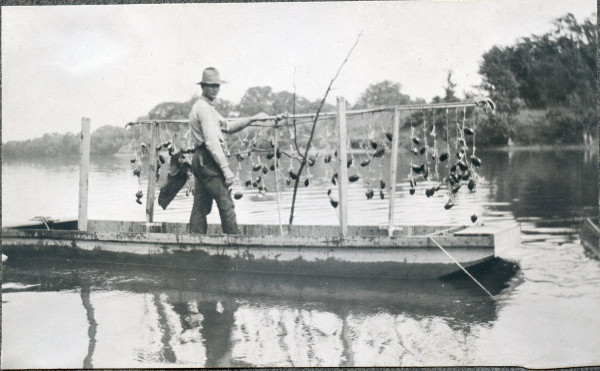