HomeLibrary & Information Technology Services Fridays with Fred: A permanent home for the president

Fridays with Fred: A permanent home for the president

Origins of the President’s house. 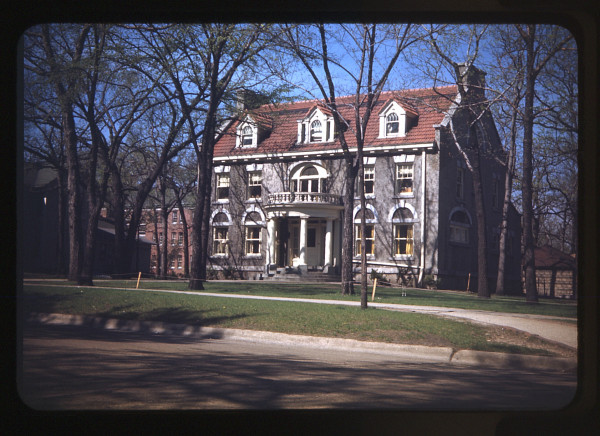 Beloit College is to build a permanent home for its president. This was the important announcement made by President Edward D. Eaton at the commencement exercises of the college at the First Congregational Church this noon. The announcement was greeted with prolonged applause by the students, alumni and friends of the institution.

This was not, of course, the lovely gnome-protected dwelling we call the President’s House today. That house, built in 1851, still had members of the Chapin family living in it. In 1910, President Eaton lived temporarily at 847 College Street in a home which later became the long-gone Junior House, a dormitory for women. College trustees, as well as President Eaton himself, felt that the president should reside in a more distinguished looking house in keeping with the dignity of his position. At their annual meeting on June 18, Judge Nathaniel Sears proposed that the college fund the building of a president’s house. The Trustees approved his motion and appointed a committee to oversee plans and construction. As “ex-officio” member of the committee, President Eaton himself took an active role in planning his new home, which would cost just over $12,500. 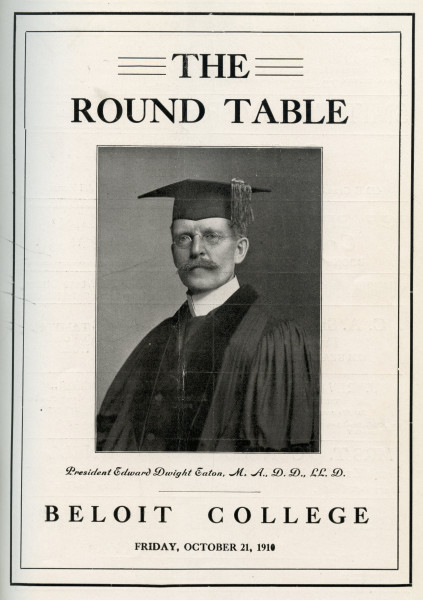 The Chicago architectural firm, Patton & Miller, was their first choice to design the building. Normand S. Patton was a favorite of Eaton’s. They’d attended Beloit College together in the early 1870s and the college had employed him to design several earlier buildings, including the Carnegie Library (WAC), Emerson Hall, the college chapel and the Smith Gymnasium, among others. Plans for a large colonial-style house featuring an impressive circular pillared porch took shape. The two-story cement house with partially finished-off attic would include a red tile roof, a screened-in sleeping porch and, as the Beloit Alumnus colorfully informs us, a “double series of ventilated blocks with exterior finish of pebble dash.” The college chose a vacant lot on the corner of Clary and College streets, surrounded by a grove of majestic oak trees. By October, construction was well underway and proceeding apace:

The contractor, Mr. A.L. Dearhammer, of Beloit, encourages the President to hope that he may gather his family there around the festal board at Christmas time.

Alas, the Eatons had to “gather ‘round the festal board” somewhere else, but when they moved into the house at 846 College Street the following February, no doubt they appreciated the modern hot water heating and electric lighting and the relative peace and quiet in a period when the only student housing nearby was Emerson Hall and a few cottages. Although there was apparently no official dedication, members of the college community felt quite pleased and proud, as exemplified by an extensive article in the Round Table, by Gordon Michie, class of 1913:

An old alumnus and the writer walked up College Avenue the other afternoon to see President Eaton’s new house. Wishing to pique his curiosity, I said to him that I would not point out the exact house, but told him that he would come to it within the next block. Hardly had we proceeded half the distance when his eye fell on the stately gray, pebbledash home at the corner of College Avenue and Clary Street, with its substantial proportions, and enduring colonial architecture when he exclaimed, “There it is; why, that’s Prex personified.” 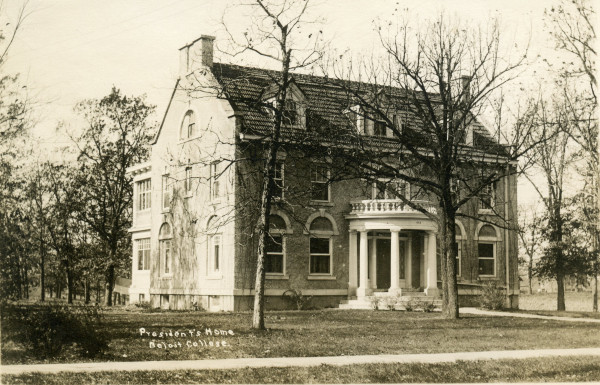 Michie described the large square windows to each side of the front pillars as “[suggesting] the big-hearted hospitality of the early days.” Naturally, the president and his successors would do much hosting and entertaining both inside the house and on its substantial grounds. On a blustery winter’s day, Eaton and his visitors would huddle in the tastefully appointed parlor, relishing a crackling fire in the “huge old-fashioned, wide-throated fire-place which projects out into the room a little way and tapers as it reaches the ceiling.” On a more clement day visitors might clamber up the stairs and gaze out the second floor windows for a spectacular view across the treetops to the Rock River, which, as the eloquent Michie puts it, “flows quietly down from Big Hill, in and out between hulks of smoky factories, and slips smoothly over the dam into the white turbulence below. And it is through these windows that the red sun, setting in the west, shoots its level rays into the big hall on the second floor.”

After Eaton retired, President Melvin Amos Brannon moved into the house in 1917, succeeded by President Irving Maurer in 1924. The college went through something of a building boom under Maurer, including Morse-Ingersoll and the Wright Museum on the academic side and Haven and North (Wood) dormitories on the residential side. A fraternity quadrangle began to take shape on College Street. Maurer allowed a tangle of ivy to engulf the exterior of the President’s House, even half covering some of the windows, no doubt to enhance privacy and muffle the hubbub from sometimes raucous fraternity parties nearby. 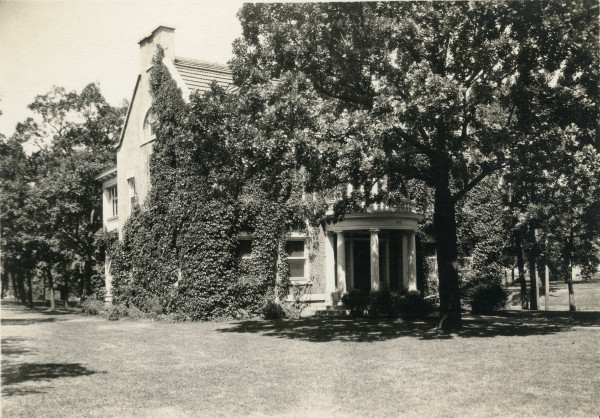 Ellen Chapin, daughter of Beloit’s first president, donated the Chapin house to the college in 1937 and after extensive renovations it became the new President’s House when Maurer and his family moved in. TKE fraternity claimed the old house, residing there until January 1943, when the United States Navy used the building as a barracks for eighty engineers-in-training during World War Two. For a brief time at the end of the war, the house served as a women’s dormitory before returning to TKE in the fall of 1946. With the influx of returning G.I.’s and an ever-growing student body, the house became inadequate for the fraternity’s needs. Plans for a much larger building similar to the red-brick fraternity houses already constructed along College Street meant farewell to the not quite 50-year-old President’s House, which fell to the wrecking ball in 1956. 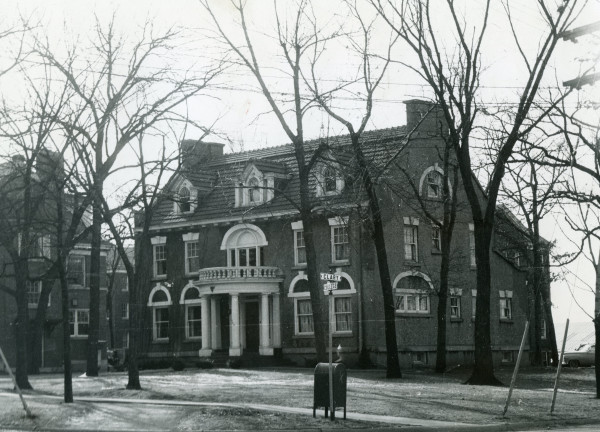