A look at Beloit College humor magazine called “The Goldfish”. 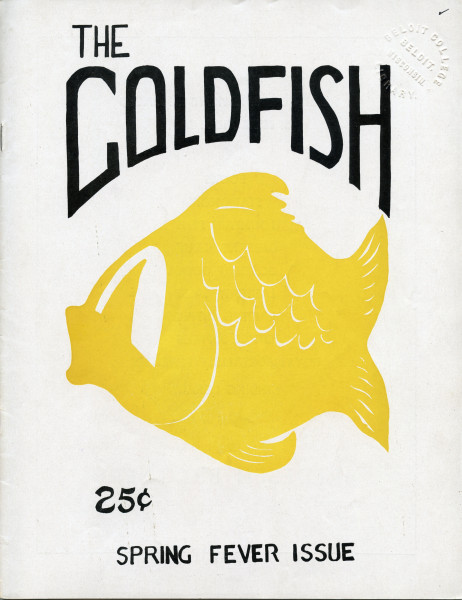 On May 9, 1946, an innocuous squib on the front page of the Round Table announced plans for a new college publication, the first of its kind, a humor magazine in the tradition of the Harvard Lampoon. Although Beloit College students had for decades included parodies, satires, jokes and utter nonsense in the college newspaper and yearbook, the Goldfish was their first attempt at an all-humor publication. 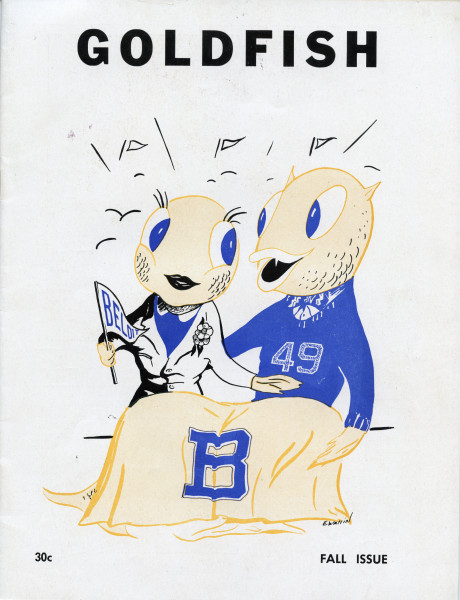 Perhaps the timing felt right coming so soon after the five year disruption of World War Two. Editor Joanne Sanger called for “humorous stories, candid camera shots of students, cartoons and articles.” The spring issue would cost students a quarter, but the staff planned to offer yearly subscriptions in the fall for one dollar. A Round Table editorial entitled “Go, Goldfish,” mentioned that the college’s Publications Board had approved the new venture. “Along with the financial support of the higher-ups, the Round Table wishes to lend its moral support,” the editor wrote, also extolling the virtue of the college having “an outlet for the efforts of aspiring creative writers.”

The Goldfish debuted on May 29. Its “Spring Fever” cover featured a bold typeface and a stylized, open-mouthed goldfish. The editors explained their choice of name:

The Goldfish will be able to cast an all-seeing eye through the glass wall of the bowl which encompasses it to watch all that happens at Beloit College – in the classroom, at the dorms and on the campus at large. On the other hand, just as the Goldfish finds itself open constantly to the public eye, this magazine hopes to show you exactly what happens at Beloit College.

The editors also offered hope that their new publication “[would] perpetuate itself through Beloit College’s second century, as the Gold and the Round Table have done through the first century.” Although that did not prove true, the magazine had enough staying power to stick around until nearly the end of the decade, while transforming into an even slicker, more elaborate production, with a stronger emphasis on offbeat and even off-color humor. 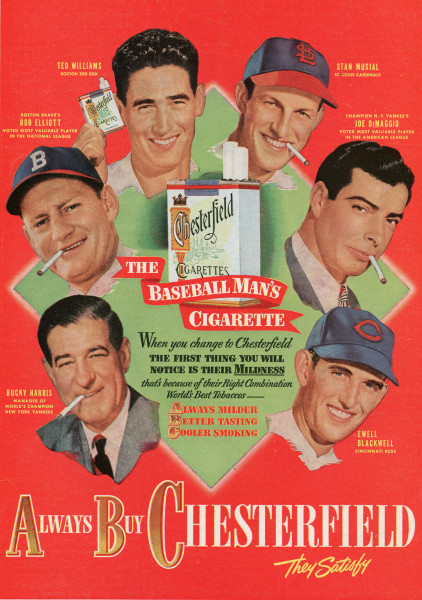 Subscriptions alone did not pay for that transformation. No doubt Goldfish staff pestered local merchants to advertise, but they also sought national sponsors and found success soliciting tobacco companies which paid for full-color back page ads featuring movie stars and baseball players smoking Camel and Chesterfield cigarettes. Even so, the magazine ran a deficit with each issue. Editors complained that, although they sold nearly 500 copies of each issue, students tended to share copies with friends and roommates.Goldfish editor, Dave Mason, insisted that he would swallow live goldfish if subscriptions surpassed 750, but it never happened. Spring 1948 found the Round Table reporting reactions to the current issue, among them:

“I’m not opposed to the magazine, only to its manner of pandering to low popular tastes.”

“We need a school magazine, but it should have better pictures. Jokes are too shady.”

“I like it very much. What red-blooded college is without its humor magazine?”

“Could be three-hundred-thousand times better.”

“I save every issue…”

“The best part of this edition of the Goldfish is the picture of Gary Cooper on the back page.” 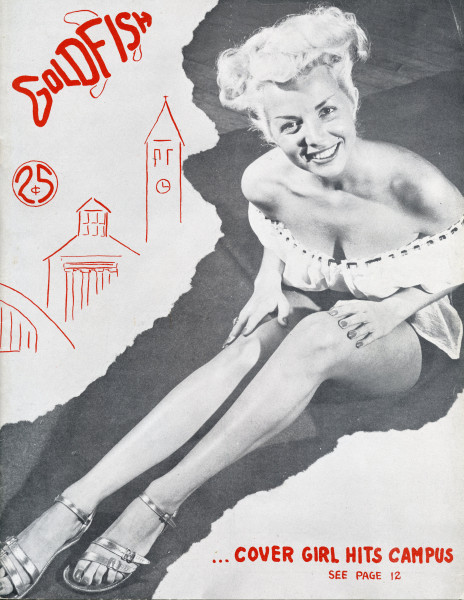 The spring issue under debate drew fire from another quarter – President Carey Croneis, who objected to the magazine’s risqué cover photo of model Gregg Sherwood. Editor Dave Mason withdrew the issue and redid the cover, airbrushing an all-black Scottie dog leaping over Sherwood’s semi-exposed cleavage. As Mason commented decades later in his aptly titled, Sweet Mad Youth of Old Beloit: “Innocence, sort of, had been restored.” The offending cover wasn’t the first in that vein. An earlier cover depicting a long line of men entering the Smith Observatory in order to peep through the telescope at a woman undressing, may also have contributed to the Publication Board suspending publication of the Goldfish after one more issue in May. 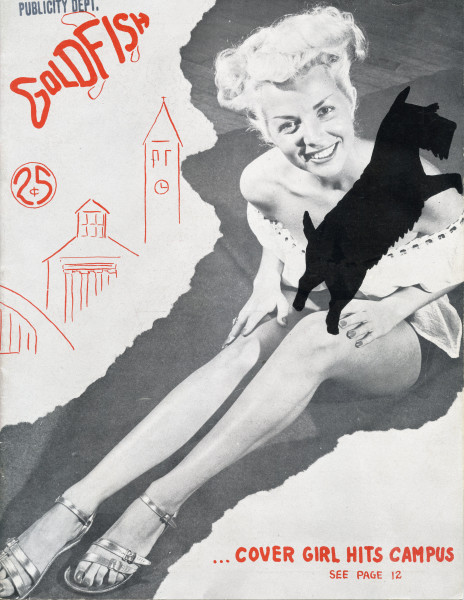 The Goldfish had conducted its own poll at the college chapel, hoping to promote its merit and viability. As reported by the Round Table, of the 452 students who filled out a questionnaire, only 20 voted against having a “humorous campus magazine.” They also voted more than 3 to 1 that student fees supply its funding, and “a 2 to 1 majority asked that the magazine remain in its present form as the Goldfish.” Editor Mason noted:

I don’t know what kind of a commentary it is on student life, but for every student who suggested additional literary articles and a “higher” type of humor, there were two who asked for more “sex and pinups.” 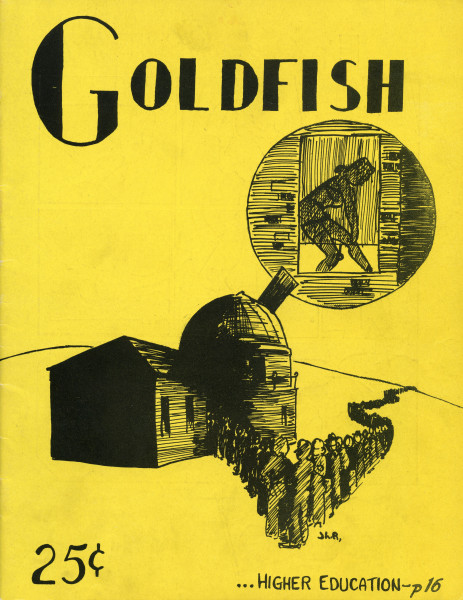 After its May issue, however, Beloit’s Goldfish quietly swam away. Over the next several years, the women’s literary society, Ka Ne, published a more modest and traditional literary magazine, the Ka Ne Turtle. In 1955, students established a new literary magazine, the long-running Satyre. We’ll explore Satyre and its successors another time. 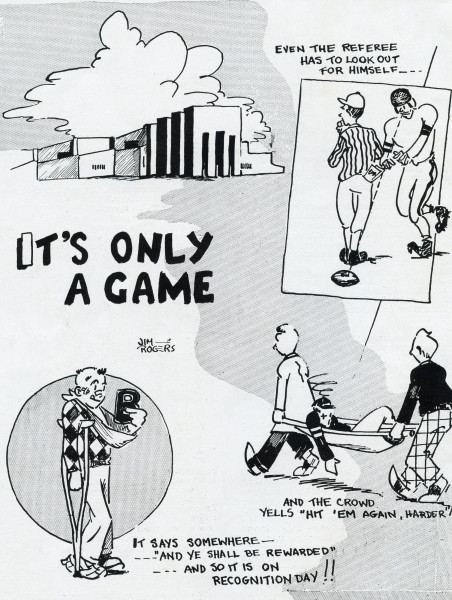 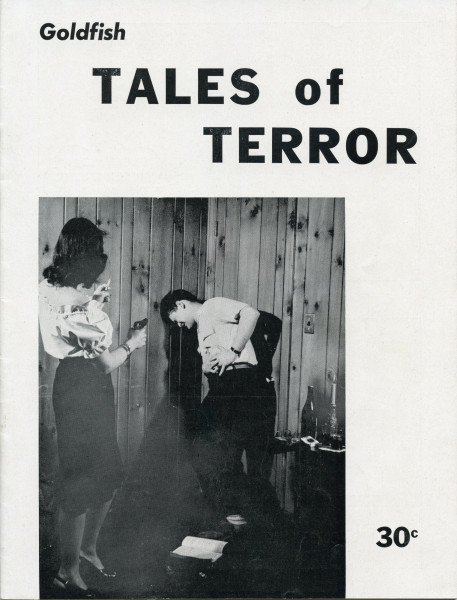 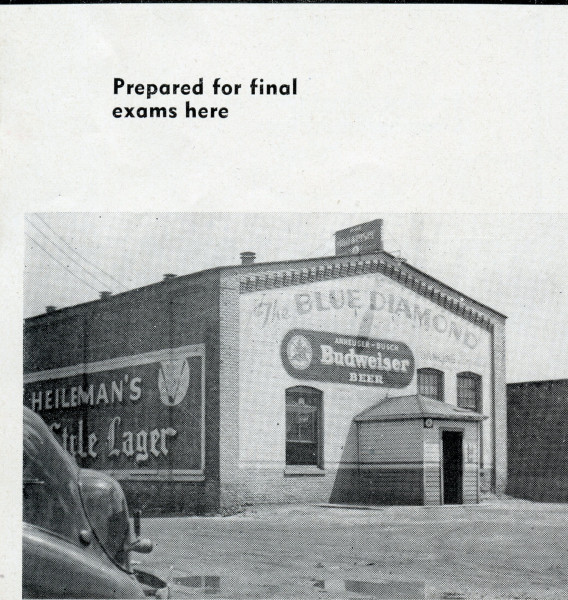 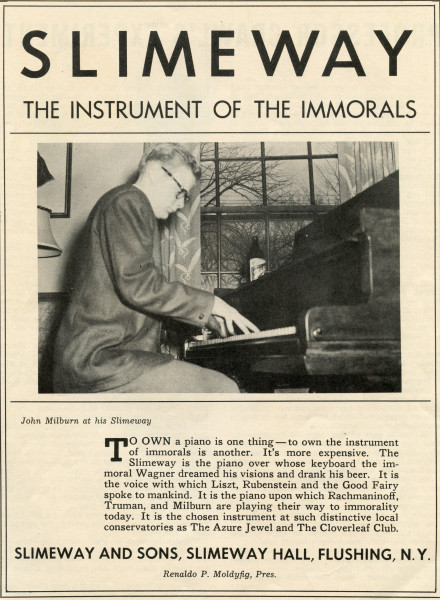