A look at Hamlin Garland who obtained an honorary degree from the College.

He turned toward her with a smile of gratification, as if he knew she had detected something out of the ordinary in him.

“No, I’m just out of Beloit,” he said, with ready confidence. “You see that I’m one of these fellows who have to work my passage. I put in my vacation at my trade.”

From: “The Owner at the Mill Farm,” by Hamlin Garland, published in the collection, From Wayside Courtships, D. Appleton and Company, 1897

Perhaps it was this paean to a hardworking Beloit College student that led the college to offer author Hamlin Garland an honorary degree in 1930. College officials probably missed another Beloit reference by Garland published in the July, 1898 issue of the Ladies Home Journal. At the tail end of “Sam Markham’s Wife,” Garland’s heroine remarks: “I haven’t enjoyed singing so well – since – well – since you came courting in dear old Beloit.” 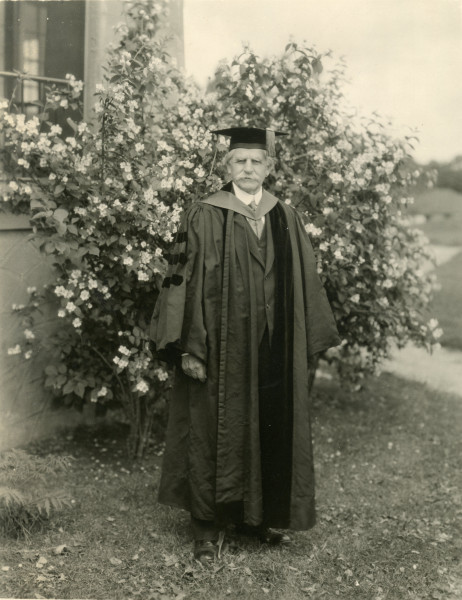 Garland (pictured above) later reprinted the story in an expanded edition of his classic collection, Main-Travelled Roads, under a new title, “A Day’s Pleasure,” and minus the sentence referring to Beloit. Most likely, however, it was Garland’s stature as one of Wisconsin’s most renowned authors that intrigued Beloit. By 1930 he was one of the few remaining of a lionized generation which included his friends and acquaintances, Mark Twain, William Dean Howells, and Bret Harte.

Garland was born near West Salem, Wisconsin, in 1860. He also spent some of his formative years in Iowa and South Dakota and in 1884, moved to Boston, Massachusetts, determined to become a writer. Main-Travelled Roads was his first great success, a collection of short stories set in the rural landscape of the northwestern prairie states which Garland dubbed “the Middle Border.” Critics praised Garland’s descriptive power and commented on his unvarnished realism. Garland achieved greater fame through his autobiographical works, A Son of the Middle Border, published in 1917, and its sequel, A Daughter of the Middle Border, which won the Pulitzer Prize for biography in 1922. A lecture prospectus from the 1930s described him as “the dean of American letters…one of the pioneers in American realistic local-color fiction.” 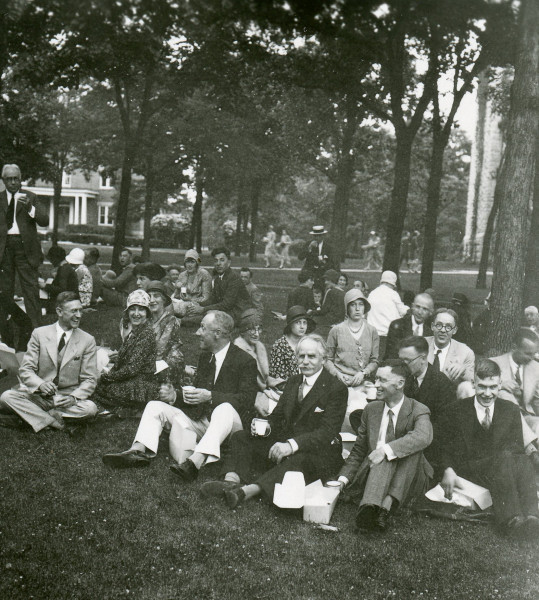 On Sunday, June 15, 1930, the college held its Baccalaureate service and celebrated the groundbreaking for a new academic building, the Morse-Ingersoll Recitation Hall. Occupied with those affairs, President Irving Maurer assigned English professor, Merritt C. Batchelder, to meet Hamlin Garland downtown at the train station. During a pause in his extremely busy day, Maurer visited with Garland, later describing him in a diary entry:

“Garland is a fine man…carrying his years well, a kindly twinkle in his eyes, gray moustache, medium height. He impressed me as having no notions and a lot of sense.”

Garland received his Doctor of Letters degree the following day, but gave no speech. “My visit in Beloit has been very pleasant,” he told a Beloit Daily News reporter. “I have enjoyed your green trees and your beautiful lawns. My visit has been most enjoyable…I like the smaller institutions, such as Beloit College. They are more like the ones I knew as a boy.” He also recalled earlier visits to Beloit, when he spoke at the First Congregational Church through the invitation of Beloit alumnus, Reverend Wilfrid A. Rowell. He had also “attended exercises at Big Hill Park,” dedicated as a city park in 1926.

Garland’s connection with Beloit College didn’t end there. In November 1931, Irving Maurer, serving as a committee member of the Liberal Arts College Movement, wrote to Garland requesting that he sponsor the movement:

…This movement has been conducting a two years’ program of dignified publicity through the use of bulletins and press notices in the endeavor to impress the American people with the genuine quality and work of the small college and to call the attention of the people to the need for adequate financing of these smaller colleges. 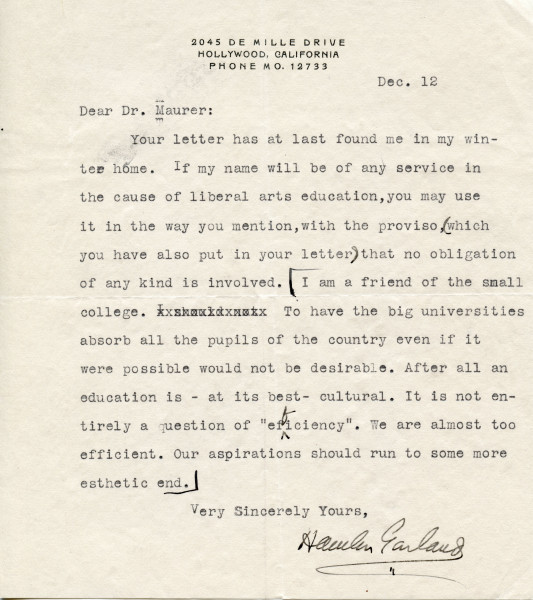 I am a friend of the small college. To have the big universities absorb all the pupils of the country even if it were possible would not be desirable. After all an education is – at its best – cultural. It is not entirely a question of “efficiency.” We are almost too efficient. Our aspirations should run to some more esthetic end.

An “exceedingly grateful” Maurer wrote Garland again, thanking him for his response, particularly his statement about the small college: “…It says in so few words exactly for what we are standing that like most of your material, it is quite quotable.”

In 1934, Garland offered to return to Beloit for a two-day stay in which he would give a lecture and talk to students. In exchange, the college would provide “one hundred dollars and expenses from Chicago.” Maurer replied that, unhappily, he could offer only $75 for an afternoon address. “I feel wretched in having to say this, but as we are making desperate efforts to keep within our budget, I see no other way…”

Garland was sympathetic: “I quite understand the situation. All our schools and libraries are suffering from the depression. If we can find a day and evening I will come and spend the night. I feel a very real bond with Beloit.”

That bond was apparent on April 16, when Garland lectured at Eaton Chapel before a large and appreciative crowd, according to the Round Table:

As an indication of the fame of Mr. Garland one had but to view the string of cars which lined both sides of the street from Emerson past the library [WAC]. Although the lecture was scheduled for 4:30, every seat and even standing room was taken long before the speaker arrived…Today Mr. Garland makes an impressive figure on the platform as his tall, erect body dominates the audience. His hair, which is gray and long, gives him a venerable and dignified appearance, which fits in well with his deep, rich voice… 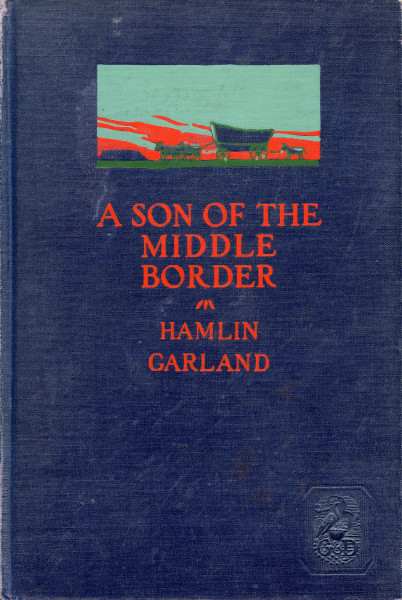 The author regaled Beloiters with colorful and incisive portraits of his many acquaintances in the literary world. “I hand it to men who took material close at hand and built it into American literature,” he said. “I like to pay tribute to them as my friends.” He recalled how much the mentorship of William Dean Howells meant to him. In turn, Garland himself mentored many promising writers, among them Stephen Crane and Native American, Charles Alexander Eastman, who attended the Beloit College Preparatory Department and became highly acclaimed for his autobiographical writing. The Beloit Daily News featured an in-depth account of Garland’s speech and described its reception:

After an hour of speaking, which seemed but several minutes to his wide-eyed and open-eared audience, the spell of Mr. Garland’s enchanting reminiscencing was broken. As the old pioneer of the middle west, who put Wisconsin life between immortal leaves and covers, stood in the chapel at the close of his lecture, factory whistles brought all back into the present machine age, when men of letters are fewer. Mr. Garland was given a mighty ovation as he and President Irving Maurer of the college left the platform.

Hamlin Garland’s day wasn’t quite over. The women at Emerson Hall held an elaborate banquet for him and then later that night he held court at the President’s House for another informal session with interested students. President Maurer spent quite a lot of time with Hamlin Garland that day, recorded in detail in his diary. Among several anecdotes, Maurer reported an encounter between his wife Minnie and Garland:

Joke on Minnie: Hamlin Garland went to his room to take a nap. As Minnie escorted him there, Garland took off his coat and asked Minnie to see that it was pressed. So down to the kitchen went the wife of the president of Beloit College and pressed the coat of one of America’s leading authors.

Garland also revealed to Maurer how much he valued receiving the honorary degree four years earlier. “[Garland] regretted that he had not had occasion at the time to say a word in reply,” Maurer wrote. “He is still a lover of Wisconsin…” The following day, Hamlin Garland traveled to Chicago by train, no doubt retaining some of the warmth and good will from his final visit to Beloit College. He passed away in 1940.