HomeLibrary & Information Technology Services Fridays with Fred: No moonlight dancing, no dish-washing in the bathtub

Fridays with Fred: No moonlight dancing, no dish-washing in the bathtub

Women organizing at Beloit in the early 1900s.

Wednesday, February 21, 1906. Students trudge across the snow-covered lawn to Emerson Hall. Classes are over for the day. To the west, the sun dips below the roofline of Beloit Iron Works across the Rock River. There’s a sense of urgency as the women of Beloit College converge on Emerson and climb long flights of stairs to the gymnasium. There, amidst dangling ropes, gymnastic rings, a vaulting horse and a few stray basketballs, they gather for an important meeting, just one decade after Beloit’s 1895 foray into coeducation. 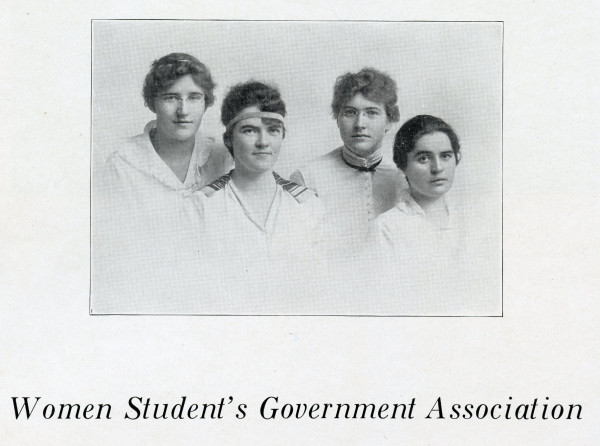 Dean of Women Florence Fensham, stands before them and speaks about women taking responsibility for self-government, citing Wellesley and Vassar as admirable pioneers. Why not Beloit? Senior Fannie Entriken and others have already been quite busy planning just such a move. As secretary of the newly founded student organization, she reads aloud the constitution and bylaws of the appropriately named Woman’s Student Government Association. After much discussion, those assembled agree to meet again in two weeks, when they will decide whether or not to adopt the constitution. 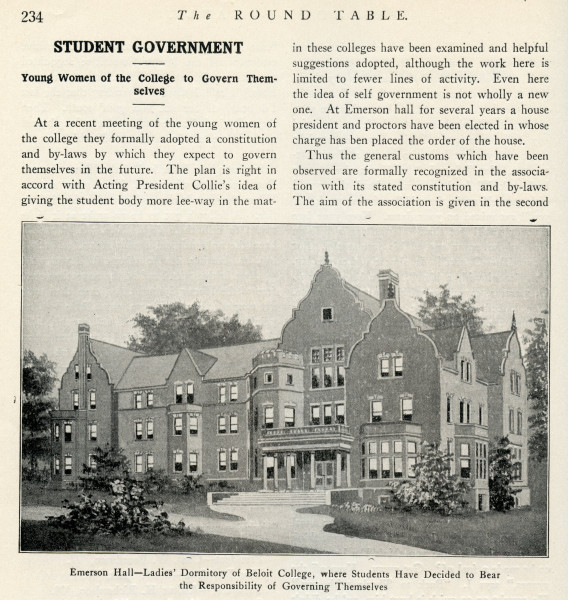 The Round Table covered the follow-up meeting, when the women wholeheartedly adopted the constitution:

The plan is right in accord with Acting President Collie’s idea of giving the student body more lee-way in the matter of their own government and although it is something of an innovation in Beloit yet the field is not wholly an untried one…The aim of the association is given in the second article and all are eager that it shall prove a success for if it is shown to be practical the field for government will be widened.

In fact, student government took on several forms over the years and strengthened over time, continuing its vital role in student life today. The newspaper printed the entire constitution of the Woman’s Student Government Association, including article two:

The purpose of the association shall be to promote unity and loyalty among the student women of the college and to encourage personal responsibility in furthering all interests not directly under the jurisdiction of the Faculty.

The women sought approval from the faculty, which then granted a charter:

[The women] have obtained full legislative and executive control in the following matters: 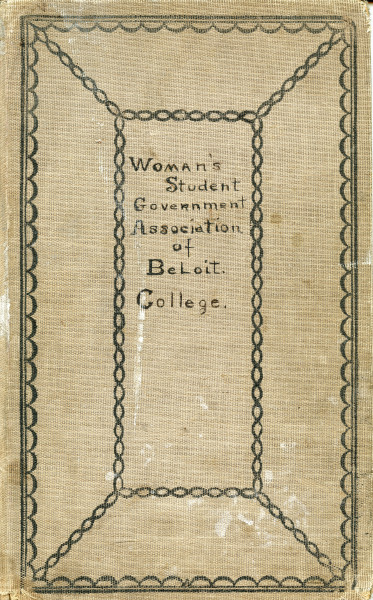 The Association purchased a cloth-bound ledger and picked a student with good, flowing penmanship to fill its pages with constitution, bylaws, and meeting minutes. Through its dedicated coverage of monthly meetings through 1919, the tattered volume serves as a remarkable window into the lives of Beloit College women during the early years of coeducation, providing revealing glimpses into the often strict rules and regulations they followed and the dire warnings and slaps on the wrist if they didn’t. The following are some sample gleanings from the ledger: 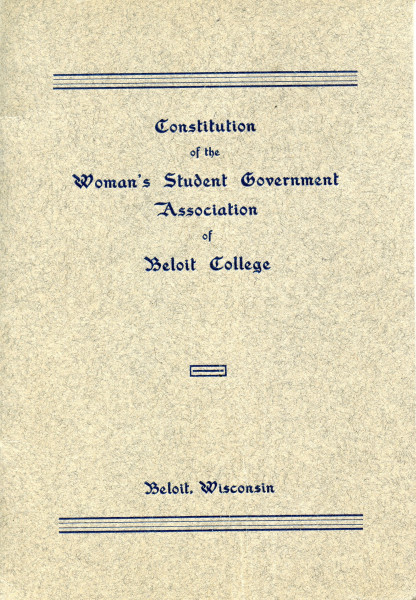 Sometime in the 1920s, WSGA began to stand for Women’s Self-Government Association. In 1939, they changed their name to the Intercollegiate Association of Women Students. Meeting minutes through the mid-1950s reflect changing times and changing concerns and are well-worth trawling through for anyone fascinated by student culture and the history of women at Beloit College.