We return for part two of our peek at Beloit College traditions as surveyed by budding sociologists Fredericka Ramsey and Margaret Rider in their comprehensive 1930s-era paper.

At any given time during the college’s first century, a freshman student might face a battle against sophomores such as the Cane Rush or the Greased Pole Fight or endure some other form of hazing. Freshman caps or “beanies” were the bane of male students yearning for sartorial elegance when entering the college from the 1920s through the late 1950s. Rider and Ramsey tell us that the tradition “originated about seven years ago when a group of upperclassmen decided that this would be a good way to distinguish freshmen from upperclassmen…All of the incoming freshmen fellows wear “green” caps during the first few weeks of the college year. They are allowed to dispose of them after the Homecoming football game.” Our model for today, wearing a blue and gold class of 1960 beanie, is Professor William Porter. Oddly, he doesn’t seem at all pleased. 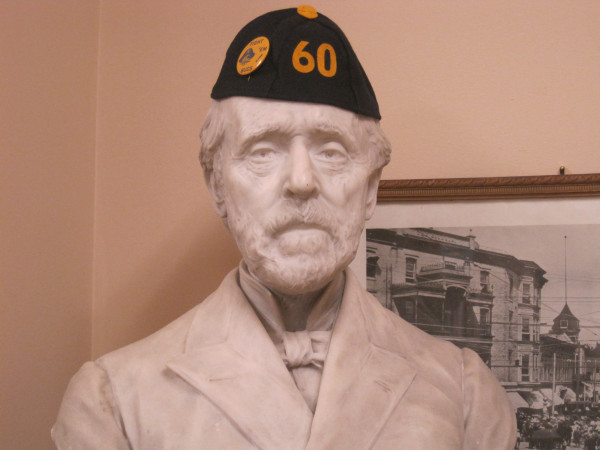 Rider and Ramsey describe a newly introduced tradition, the Homecoming pajama parade: “The night before Homecoming the freshmen men have a pajama parade starting at a pep meeting and going all through the town. The whole school participates but only the freshmen wear pajamas…The administration approves of the tradition. The faculty feel the same way. The students are very enthusiastic about the parade and have a lot of fun.” By the mid-1950s, college women were equally agreeable about parading in nocturnal attire – and singing about it, too. 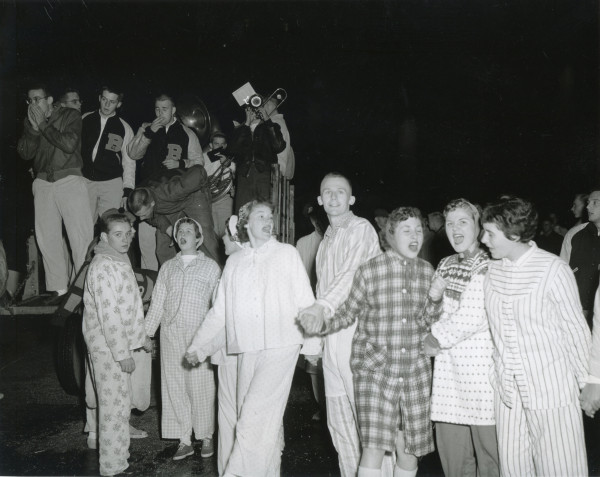 The history of smoking at Beloit College would make an interesting study. Faculty and administration banned the evil weed in the 19th century, punishing practitioners, then reluctantly began to tolerate it in the early 20th century and eventually allowed it in classrooms, the library and other campus buildings, before giving way to changing campus sentiment and the law of the land. In the early 1930s, when Rider and Ramsey composed their sociological treatise on Beloit College traditions, they wrote that “the men of Beloit College smoke practically every place on campus…Practically all of the men give this tradition a high degree of desirability and observance…” Here some fraternity men gather together for a smoke during one of their popular “bull session” discussions in the late 1940s. 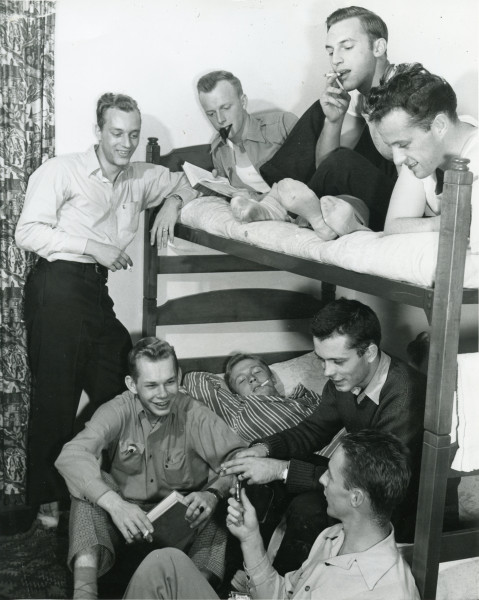 Photographs of Beloit College women smoking prior to the 1940s remain undiscovered. However, Rider and Ramsey inform us that the tradition “had its origin about 1927 when the girls first began to smoke in public places.” The college gave way to student desires and repealed its rule about women smoking in dormitories and sorority houses. Wrote Rider and Ramsey: “Women’s smoking is practically on a par with the men’s, with the exception of smoking on campus (except at night).” In 1956, women congregated for a sociable smoke on the steps of the Delta Gamma house. 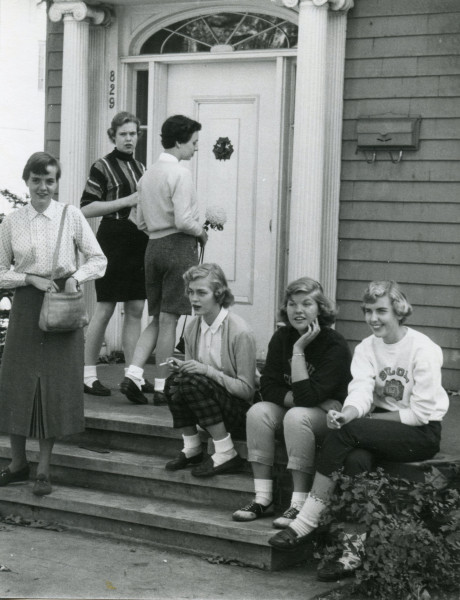 Opened in the mid-1920s by Jim Leeson, the Spanish Tavern became a popular destination and hangout for Beloit College students who enjoyed socializing off campus in an unusual atmosphere. An advertisement from 1930 mentions one of the attractions: “We invite you to view the Yosemite in miniature in our Annex. Sparkling, trickling water flows into a pond of goldfish.” The back of our 1927 postcard brags that the Spanish Tavern is “the most unique café in the Middle West” and goes on to tell us about its “wonderful lunches at 50 cents, dinners at 75 cents and fountain service and sandwiches all day long.” No doubt many students flocked there to chow down on their “Special Sunday Chicken Dinner” for only $1 – “‘Tis worth the price of any meal to dine midst the splendor and atmosphere of old Spain.” A 1991 article by Beloit alumnus Larry Raymer, noted Leeson’s attachment to Beloit College: “He assisted young men and women in their plans to attend Beloit College, offering them employment and helping them get scholarships from local business interests.” Leeson also worked closely with campus fraternities, boosted the athletic program, and sent three of his children to the college. Raymer remembered that “the college kids adored him.” The Spanish Tavern eventually became the Spanish Village and closed in the early 1940s. 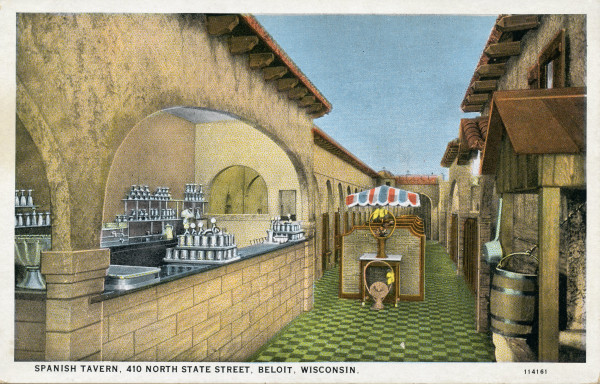 Our sociologists describe “serenades” as “one of the oldest traditions in the college.” Certainly the numerous college songbooks attest to student love of singing. Men serenaded women. Women serenaded men. Sororities and fraternities serenaded each other. And, as shown in one of Ray Metzker’s fabulous photographs from the early 1950s, seniors serenaded the president in front of his house. A caption taped to the back of the photo informs us that the “annual senior sing” is a Commencement-time tradition, and explains their formal dress: “A class party – their final one before graduation – follows singing of college songs.” 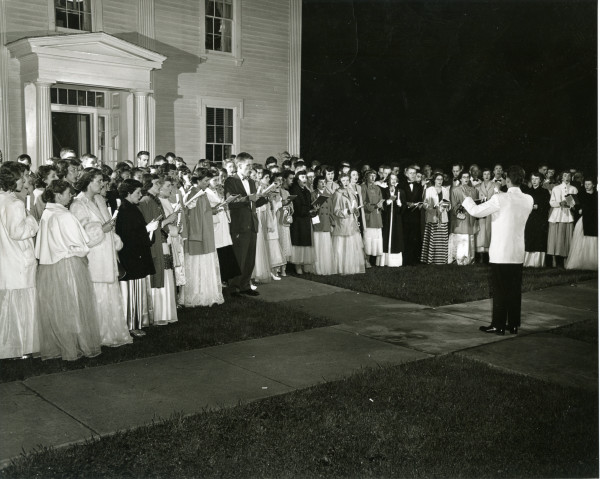 As exhaustive as their survey is, Rider and Ramsey skip a couple of other longtime traditions – parody, or joke issues of the Round Table and the inclusion of humor in the college yearbooks. An example from after their era appeared in the 1950s, when the Gold printed an annual “Who’s Who,” a dressed-for-success lineup of Beloit College’s “outstanding leaders,” chosen by the Student-Administration Committee. In reaction, the Round Table staff picked a “Who Ain’t,” compiled of students left in the dust as undesirable. Photographs in the Gold reveal a motley crew grouped together in wild poses and wearing outrageous costumes. The 1959 edition of the Gold describes the group as “the summit of student aspirations,” recognizing “those students who have contributed the least to campus progress during their four years of marking time at Beloit.” This 1964 Gold outtake offers a convenient excuse for us to commemorate the 50th anniversary of the British Invasion, as we see John, Paul, George and Ringo jamming together here in Beloit. The February 14th issue of the Round Table sounded distinctly unimpressed by the four mop tops in their article entitled, “Elvis Greater than Beatles”:

The Beatles hit Beloit last Sunday night via the Ed Sullivan Show. People were crowded into housemothers’ rooms and huddled in fraternity basements with eyes glued to television sets…The television audience suffered through an hour of poor entertainment to see the singers for a total of five songs. This reporter heard varied comments: “They hardly moved,” exclaimed one girl and another sighed, “Not half as great as Elvis.” Someone else thought, “At least two of them are girls,” and yet another thought that the girls in the television audience had been bribed to scream and tear their hair…But they must have been well received by the majority. Every other song in the Union is still sung by the Beatles… 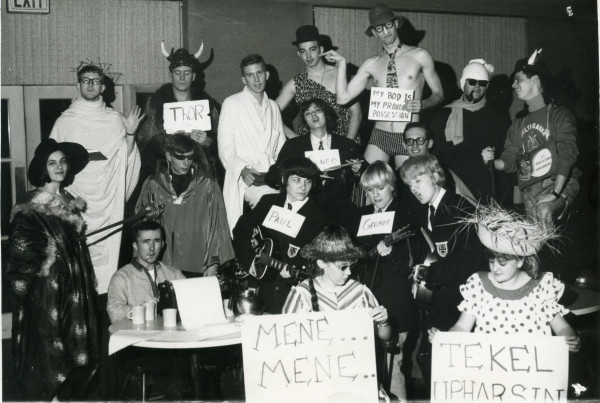