A look at Fredericka Ramsey and Margaret Rider’s paper on “Traditions of Beloit College”.

Among the countless treasures tucked away in the Beloit College Archives are many fine examples of student academic work: handwritten theses from the 19th century, Field Term reports from the Beloit Plan era of the 1960s and 1970s, folders chock full of poetry from John Rosenwald’s creative writing classes, and dozens of images developed and printed in campus darkrooms by Michael Simon’s photography students. There are also a great variety of student papers on Beloit itself. One paper focuses on the architecture of Pearsons Hall. Another paper studies isolationism on campus just prior to the U.S. entering World War II. Still another examines the advent of the Black Power movement on campus in the late 1960s. For their sociology class in the early 1930s, Fredericka Ramsey and Margaret Rider wrote a lengthy paper entitled “Traditions of Beloit College.” The students surveyed 36 Beloit traditions, including social, intellectual, scholastic, athletic, and religious. They also reported on “obsolete” traditions such as “no movies on Sundays,” explaining that “it was not until 1923 that students began to go to Sunday movies and although college authorities are opposed to it, students continue to go and probably in larger numbers each year.” 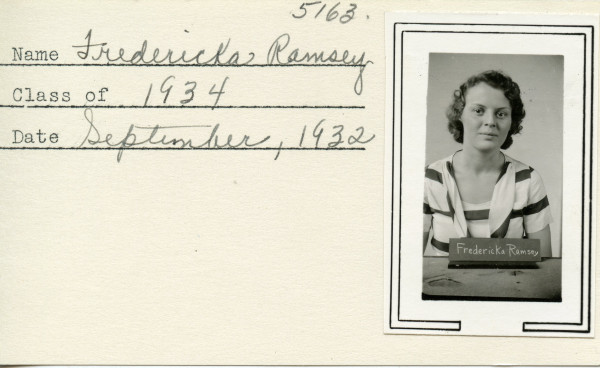 In their survey form, under “attitudes held toward tradition,” they reveal a timeless tug of war between younger and older generations:

“The student body regards the tradition against movies on Sundays as being an old fashioned idea while members of the faculty regard it as being beneficial, believing that students leisure time could be used to better advantage.” 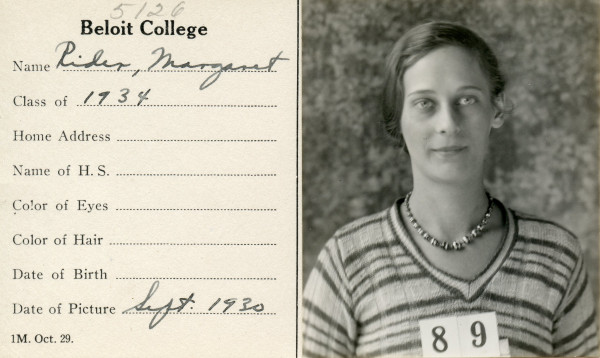 Of course many of the traditions popular in the 1930s are now long gone, supplanted by other traditions and later on replaced by still newer traditions. Perhaps an ambitious pair of students could replicate the 1930s study in 2014. For part one of a two-part series, let’s raid the archives collections and illustrate some of the traditions described by Ramsey and Rider.

The authors inform us that the tradition for having bands play at athletic games “is quite an old one. It originated to add color to games and to arouse enthusiasm…The students are in favor of it but don’t appreciate it much.” A 1930 photograph shows the college band next to Eaton Chapel, with floats trailing behind. 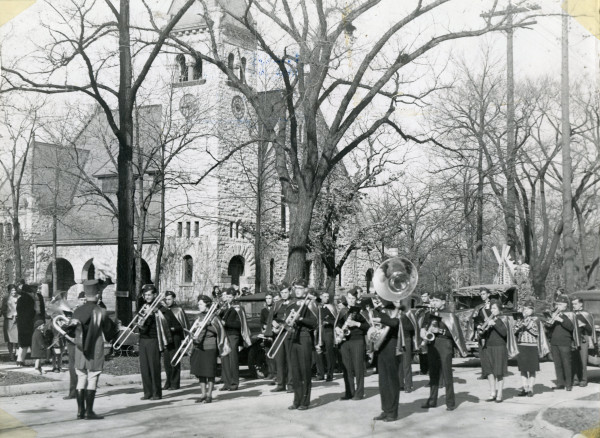 From its inception, the college fostered competitive debating societies, which later gave way to a debate club. By the turn of the 20th century, intercollegiate debates had nearly as rabid a Beloit following as did football. At the time of this study, the college’s speech department sponsored a “Debating Club” which pitted two teams composed of juniors and seniors against each other arguing important topics of the day. 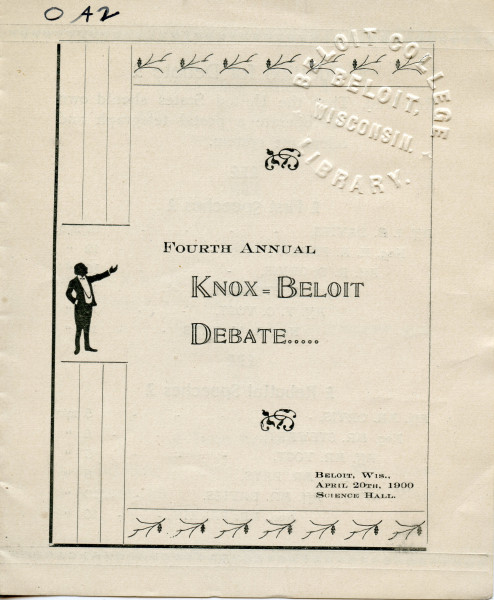 The writers grouped the Ka Ne Literary Society, founded in 1920 for women students, under “Traditions – Intellectual.” The society met monthly for literary discussions and eventually published the Turtle, a magazine of poetry and fiction by Beloit College students, which appeared through the early 1950s. 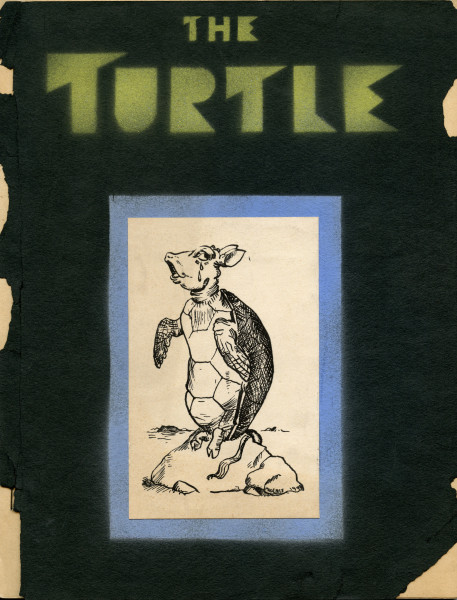 Although Ramsey and Rider claimed “Hazing of Freshmen” as an obsolete tradition, some form of hazing continued for many more years. “The hazing of the freshmen started out easily but it became a cruel and vicious hazing,” they wrote. “The faculty and administration thoroughly disapproved and eventually forbade hazing. The students rather enjoyed it.” As a sophomore in 1909, Theodore Chrischilles depicted hazing in one of the many comical drawings illustrating his diary. 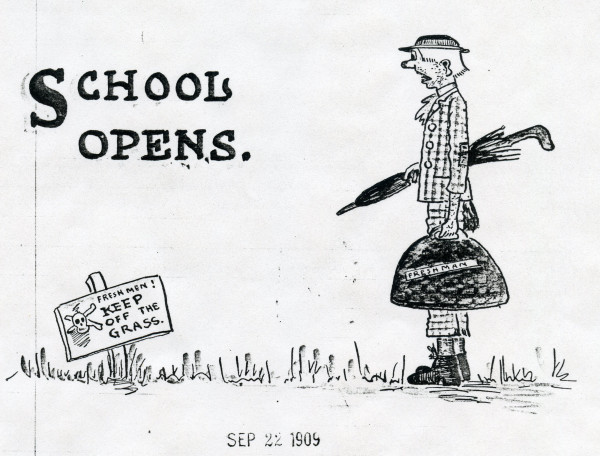 Exotic hats and dapper walking canes appealed to students of the late 19th century such as these members of the class of 1887, who appeared in rather wild garb as freshmen in 1884, apparently by choice. According to our sociologist students, “the faculty and administration were indifferent to this tradition.” 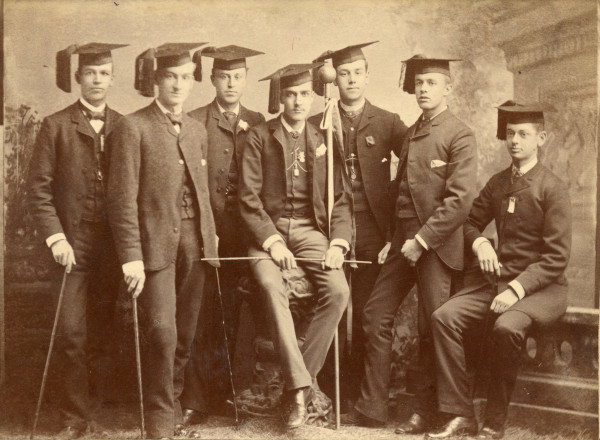 Christmas Vespers was a long standing tradition, replaced in recent years by annual holiday choral concerts held at Eaton Chapel. A typical program in the 1930s featured President Irving Maurer acting as minister to the congregation, guest organists and harpists, vesper and a capella choirs, and the singing of traditional Christmas carols. 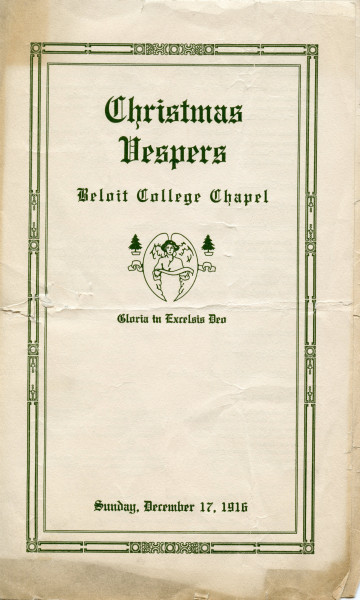 After World War I, the college observed Armistice Day for many years. “This is another recognition service for those who lost their lives in the World War,” Ramsey and Rider wrote. “At this service all of the names of Beloit men are read to the College assembly, after which taps are blown terminating the service.” A rare photograph displays the World War I service flag hanging in Eaton Chapel, each star representing a member of the college family who served in the war. 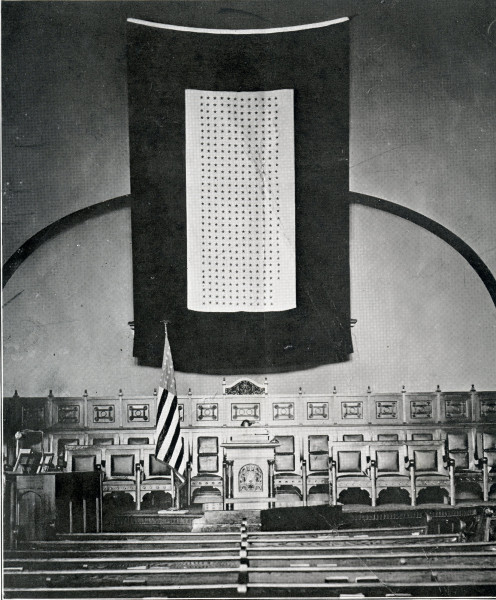 Students loved a good roaring bonfire during Homecoming festivities or after football victories. Enterprising pyromaniacs raided local stores for discarded crates and boxes and barrels and hauled great piles of wood onto campus. By the early 1930s, victory bonfires had temporarily snuffed out because they “became too much work,” possibly due to conflagration fatigue. Wrote Ramsey and Rider: “They had the bonfire whether the team won or not.” Homecoming 1955, however, found the tradition alive and well, certainly ablaze with newfound vigor. 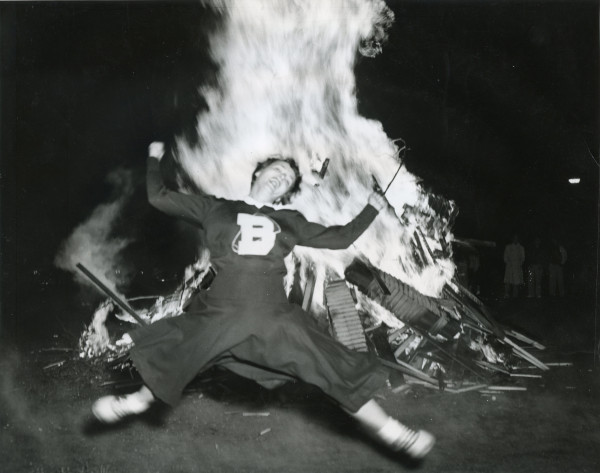