Fridays with Fred: Random sketches of the college’s architecture

A look at Beloit from the lense of sketches.

At any given time in Beloit College’s history, one might stroll across campus and observe an artist hard at work, sketching or painting a college building. The artist might be a student or someone from town or hired by the college, creating art for a class or for pleasure or for a paycheck. Search through decades of college yearbooks, tattered copies of the Round Table, fundraising brochures and admissions pamphlets and you’ll find many examples of this passion for campus architecture, from the cartoonish caricature to stunning works of graphic art. Most of these appear once and then disappear, awaiting a curious soul, trolling through the relics of the past.

A recent rummage in the Beloit College Archives brought some of these artworks to light. Deep in the archives’ “vault” reside large metal map cases stacked high, drawers brimming with oversized photographs, posters, and other materials that don’t fit in an ordinary box or on top of a shelf. One such bottom drawer yields an old art folder stuffed with drawings, etchings and sketches, unseen for years, perhaps decades. No rhyme or reason. Rarely offering date or identification. No discernible order. Crying out, “Let us be seen!”

Here are a dozen:

An unusual skyline image of the campus, facing south. Buildings from left to right: Eaton Chapel, old Chapin Hall (a dormitory razed in 1965), Middle College prior to its 1938-39 renovation, Pearsons Hall with its 1920s-era WEBW radio tower, and the Smith Gymnasium.

A silhouette of Middle College in its 1880s-era Victorian “gingerbread” phase. A stiff wind prevents the stylized “B” from crashing into the cupola. 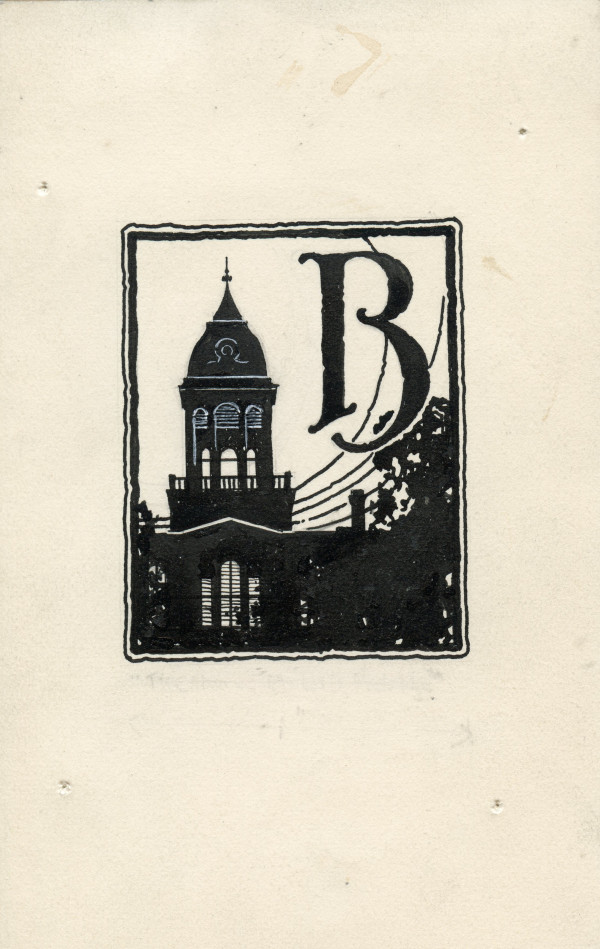 When planning to honor those from the city and college who died in the Civil War, President Aaron Lucius Chapin declared, “A monument ought to be of stone, not brick. The college dedicated the limestone Memorial Hall in 1869. For many years the building served as the college library. Today we know it as the Logan Museum of Anthropology. 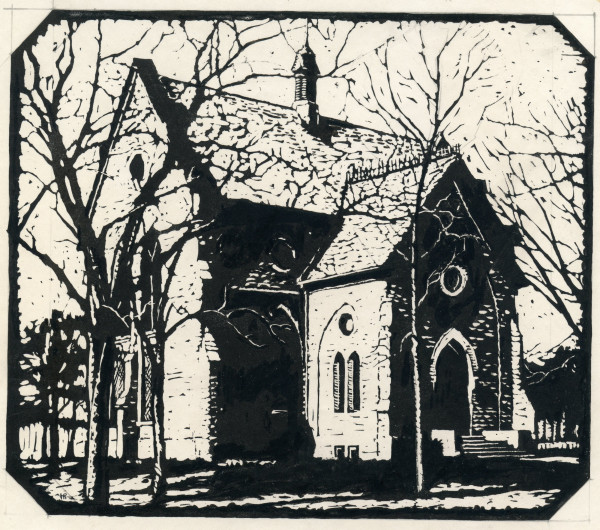 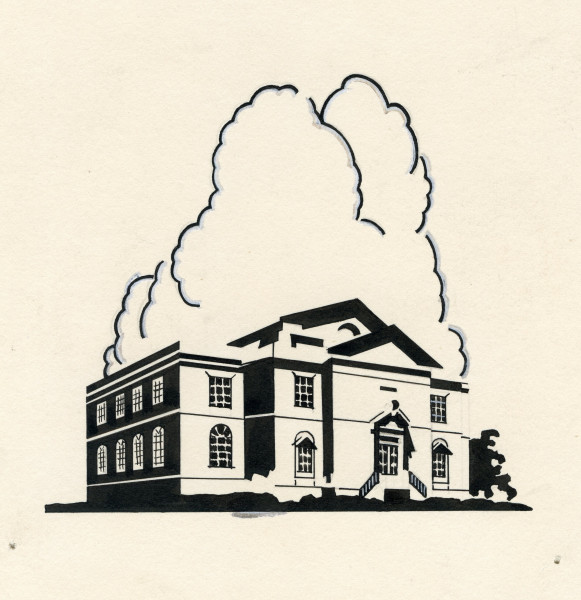 The class of 1907 presented a limestone arch as their senior gift and placed it at the corner of Bushnell and College, where the Poetry Garden stands today. The college took the arch down in 1937 and removed the keystone, installing it inside the newly renovated Eaton Chapel. The keystone made another journey after the chapel’s 1953 fire. Today it rests atop a door opening to the west at the north side of the building, a few steps from the rival class of 1908’s “Senior Bench.” 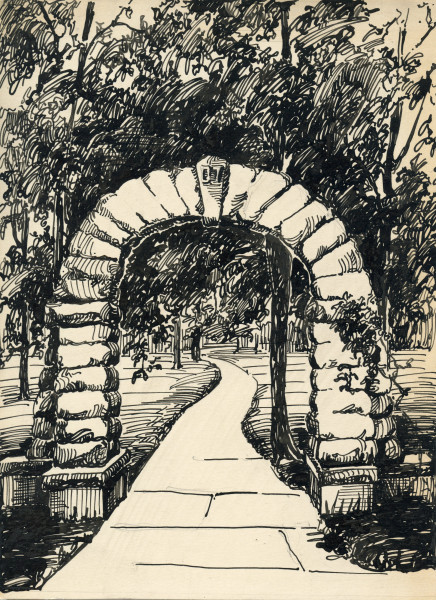 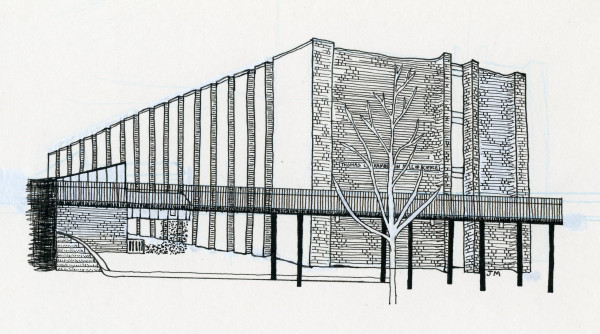 Beloit was one of the first colleges to build a Carnegie Library, dedicated in 1905. By the early 1960s, the college needed a much larger facility and constructed the Colonel Robert H. Morse Library. With the college’s strong commitment to its World Outlook Program, they decided to renovate the old Carnegie building as the Pettibone World Affairs Center, which opened in 1964. 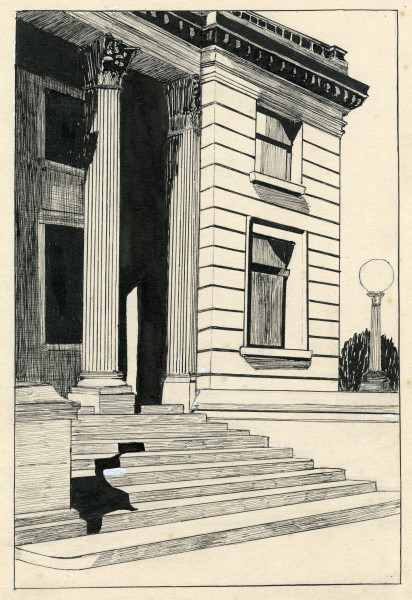 The college emphasized its history with this old-fashioned design for campus signage. 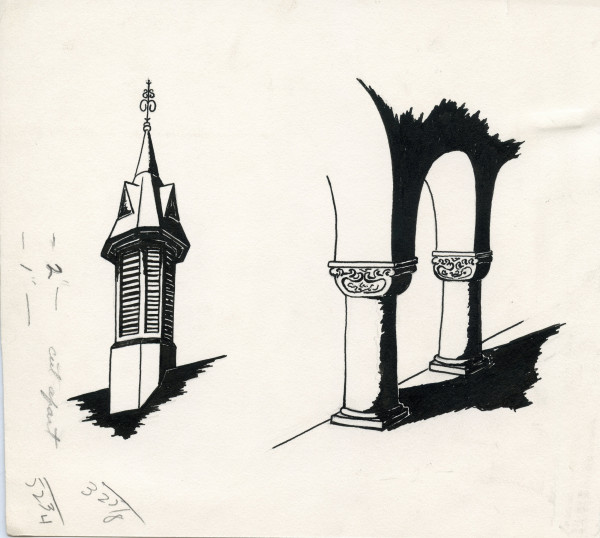 One artist drew a close-up series of campus doorways and windows. If you head southwest you’ll see this Morse-Ingersoll window, right before entering the archway. The college dedicated the Morse-Ingersoll Recitation Hall on October 20, 1930. It provided much needed classroom space, offices for faculty and an auditorium later named for longtime history professor and first college archivist, Robert Kimball Richardson. 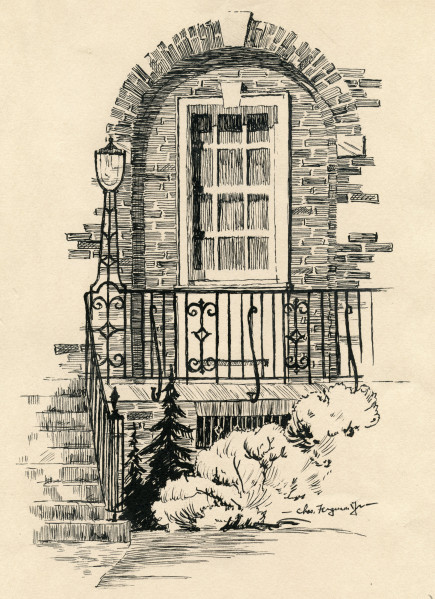 Eaton Chapel, dedicated on January 26, 1892, became a focal point for the campus, a home for chapel services, lectures, concerts and meetings. After a devastating fire on December 12, 1953, the college salvaged exterior walls and tower and rebuilt the chapel, rededicated exactly one year later. 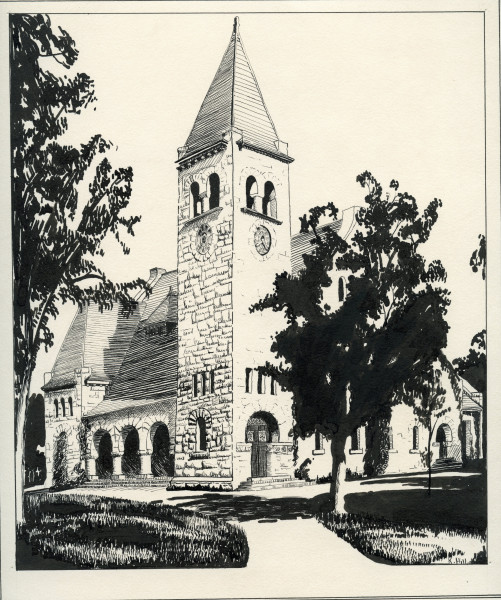 Considering the brutal winter of 2013-2014, all of us at Beloit today can relate to this drawing of a snowbound Middle College, created sometime before 1938. 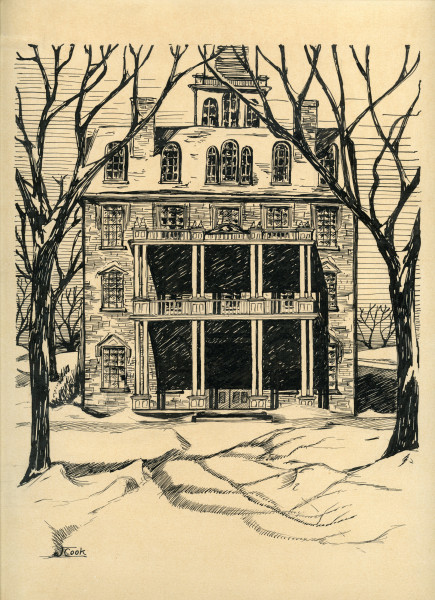