HomeLibrary & Information Technology Services Fridays with Fred: Do you know the Round Table’s would-be rival?

Fridays with Fred: Do you know the Round Table’s would-be rival?

A look at the Junta Climax. 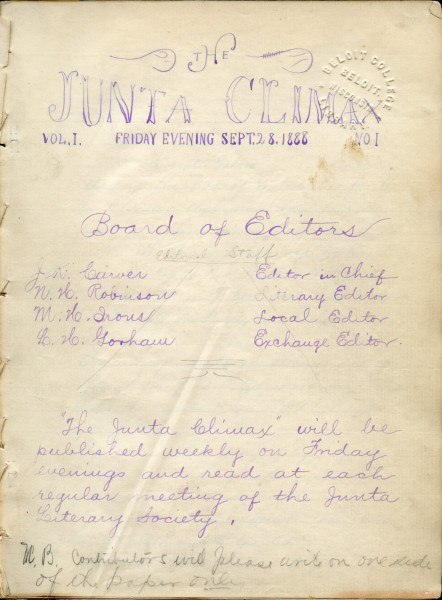 During the late 19th century through 1910, Beloit College’s student newspaper, the Round Table, had a junior sibling–or perhaps a would-be rival–known as the Climax. To understand how that came about, we need to travel back to the earliest days of the college, when its preparatory department students far outnumbered students in the college proper. President Edward Dwight Eaton explained in his Historical Sketches of Beloit College:

The lower story of the chapel building [South College] was assigned to the preparatory department, which from the outset was a necessary adjunct of the College, since there was not then a single public school in the Territory that could meet the entrance requirements which the College courageously set up. For many years to come the College would have to maintain its own school in order to secure adequate preparation for its college students, with the exception of those who came from the leading cities of the region.

The preparatory department was not exactly a high school–student ages ranged at times from 14 to 30, and like the college, its curriculum was at first solidly classics-based. In time, the preparatory department changed its name to the more modern-sounding “Beloit Academy.” The school outgrew its cramped quarters and moved to the newly built Scoville Hall in 1890, today the site of Scoville Apartments. Academy students participated to a limited degree in college activities. They attended chapel services and the best athletes participated in college sports. Several outstanding athletes, who moved on from the academy to the college, managed to play on college teams for as many as seven years. Even the academy students who did not continue on to college always considered themselves Beloit College alumni. However, college students excluded “preps” from their popular literary and debating societies, musical clubs and fraternities. Campus publications gave them short shrift or enjoyed poking fun at the hapless youngsters.

Early on, students in the preparatory department formed two competing literary societies, the Philagorean and the Adelphian. In 1871 they joined together as the Junta Literary Society, a name suggested by Professor J.J. Blaisdell. Every Friday evening they gathered together and debated what they referred to as “important questions of the day.” 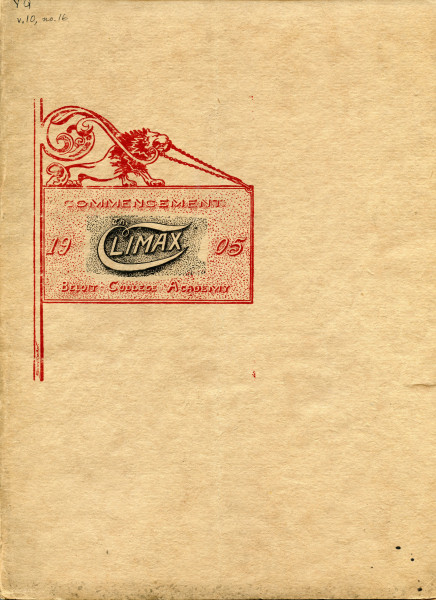 Budding editors and writers must have cast longing glances at the well-established Round Table and then heaved jealous sighs. One Friday evening in September of 1888, the Junta Literary Society convened with a new objective: establishing its own newspaper. There were no funds available for printing, but the society purchased a thick bound volume, enlisted a student artist to create a masthead, and found someone with a good, neat hand to transcribe articles written by fellow members. They christened their new journal, the Junta Climax, to be “published weekly on Friday evenings and read at each regular meeting of the Junta Literary Society.” The first issue explained that the Junta Climax would serve as “a good way of developing ourselves in clearness of expression, accuracy of thought and fairness of argument…” Editor-in-chief J. Keith Carver spelled it out further:

We may not be able at the start to electrify the universe by any show of deep learning or by a great cataract of literary effulgence, for we are only at the bottom of the climax or ladder, and our vision extends over such a little space…Let us each do what we can and we may be sure success will crown our efforts in due time. 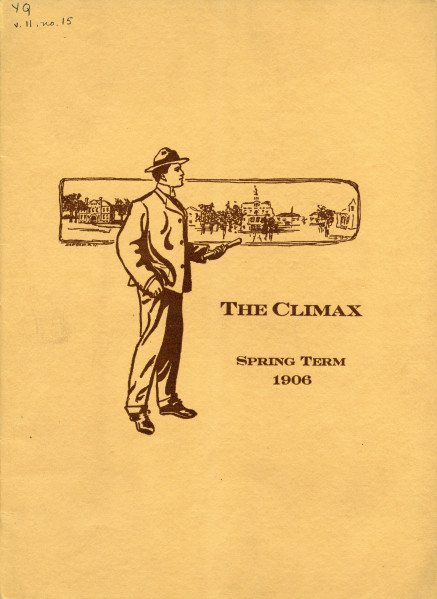 Those efforts filled hundreds of handwritten pages over the following year and a half and included feature articles, essays, editorials, sports coverage, short fiction and poetry, filler anecdotes and humor. One hundred and twenty-five years later, the bound volume remains in good condition, apart from separated covers. Whether students compiled a second, similar effort, we don’t know. The next surviving issue, volume 10, number 16, dates from June 15, 1905. By then, the Junta Literary Society had renamed the paper simply, the Climax, and had secured funding for printing each issue, complete with a tasteful cover on thick paper stock. The Climax appeared bi-weekly during the school year before adopting a monthly schedule. A subscription cost $1 per year. An October 1909 issue bragged about the paper’s longevity– “The Climax has been carried successfully through its fifteenth year”–so there is apparently a significant gap in our archival files. 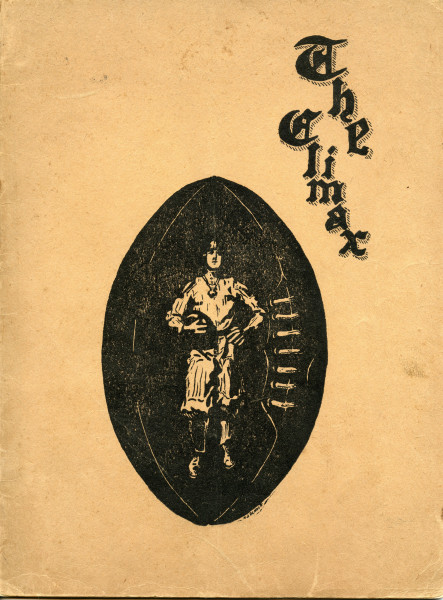 The printed issues mimicked the Round Table in style, a blend of pertinent news and impertinent humor, rah-rah boosterism with a sometimes chiding tone, strong coverage of sporting events and brief write-ups on interesting alumni, honoring those with distinguished business and academic careers and raving over former academy students now playing professional sports:

“Sammy” Ransom, the colored youth who contributed much to athletics while attending the academy, is playing with the colored Gophers of St. Paul, Minn. This team is one of the speediest negro aggregations in the west. Last season they won thirty-six straight games.

Ambrose McConnell, an old academy man who played a star game at short on the college varsity in 1903, is making an enviable record for himself at second base for the Boston Americans. He was at the head of the batting list in the American league a short while ago and is considered one of the fastest second basemen…

The class of 1909 yearbook, the Codex, printed “Gleanings from The Climax,” which included a good example of the paper’s humor:

A Prep. course in Four Acts:

The paper seemed especially interested in the academy’s international students and published articles by students from Bulgaria, Japan and Turkey, among others. 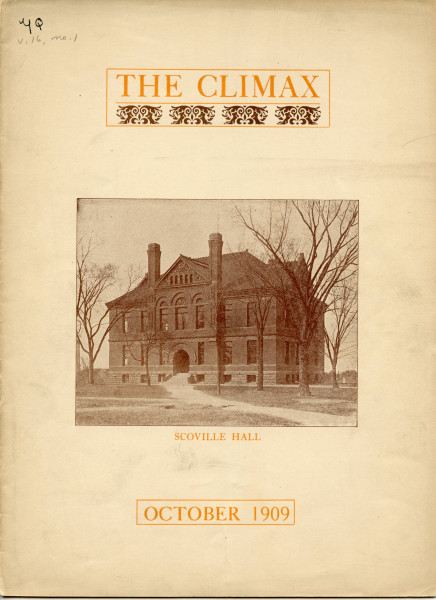 The Beloit College Archives holds a good, though incomplete, run of the Climax between 1906 and 1910, the year that the college decided to close the academy for good. Regional population had grown considerably over 65 years, public schools were far better and college admissions requirements had changed. The still all-male academy seemed anachronistic and had become a money drain. The Climax printed its final issue in June 1910. Following two pages of advertisements, the editors inserted a large box on the following page, headed “Memorial”:

This, the last number of the Climax, we dedicate to the great multitude of those who have loved the Academy in years gone by and who cherish the ideals for which it has stood. We are confident that the happy memory of days spent in dear old Prep. will not be taken from your hearts and that your love for the Academy will never grow cold. Cherishing this fond hope, the Climax Board of nineteen ten, bids you, one and all, Adieu.

The issue featured farewell remarks from Academy principal, John Pitt Deane, and academy history from beloved former principal, Almon W. “Papa” Burr, as well as numerous letters to the editor from academy alumni. An editorial lamented the school’s closing, called for annual reunions during Commencement week, and cried out at the end, “LONG LIVE PREP. SPIRIT!” 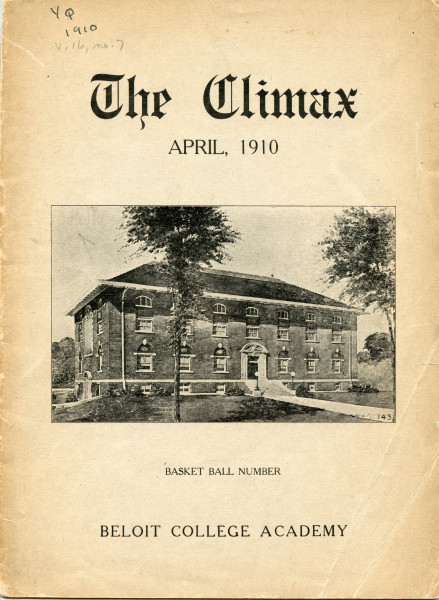 It would be a good thing to regain the lost voices from this neglected aspect of Beloit College history. Perhaps a Beloit attic or basement will cough up a packet of long missing issues. Or perhaps a descendent of one of the Beloit Academy boys will stumble on a twine-wrapped stack of pristine copies and send them home.