HomeLibrary & Information Technology Services Fridays with Fred: A photographic essay of the college in the teens

Fridays with Fred: A photographic essay of the college in the teens

A look at pictures taken by Harris Dale Hineline, class of 1915.

In my arrival at Beloit College in September, 1911, I had with me a very good camera, which I used to make pictures of Beloit people and places, (and sold many post card copies!). And, I have kept the negatives, with the thought that sometime, I would make prints from them for the College. That time has now come, and I have made 8 x 10 projections prints from about seventy two of those negatives, and bound them up in a reasonable good volume, to go on the Library shelves if you like.

Within a short time, Gage received a sturdy volume covered in heavy cardboard edged with pink cloth. Hineline scrawled its title in black pen: “Beloit in the ‘Teens.” Opening the book, Gage discovered an astonishing collection of photographs illustrating daily life on the Beloit College campus over 40 years earlier.

“The pictures are very superior and are equal to those we are taking today,” he wrote to Hineline. “This was a period in Beloit College history that is not very well documented in our files with pictures and for that reason I am most eager to have this book. For instance, the chapel interiors are priceless as we have no pictures, to my knowledge, showing the interior arrangement of the Chapel before it was made over in 1938.”

The 1915 annual, the Codex, identifies Hineline as “Harry,” but like every other student in those days he also sported a nickname. His fellow students called him “Shrimp.” While at Beloit he sang in the Vesper Choir and served on the Codex board as, naturally enough, a photographer. His portrait (below) reveals a strong face with an intense, bespectacled gaze. Although he left Beloit in early 1914 and received a B.S. degree from the University of Wisconsin, he remained an ardent Beloiter and loyal member of his class. For several years he served as a research chemist for the Eastman Kodak Company and Westinghouse, before spending the majority of his career as a patent solicitor and attorney. All along he remained fascinated by photography, setting up his own darkroom for negatives and prints, and creating homemade books of his best work. He passed away at the age of 83 in 1973. 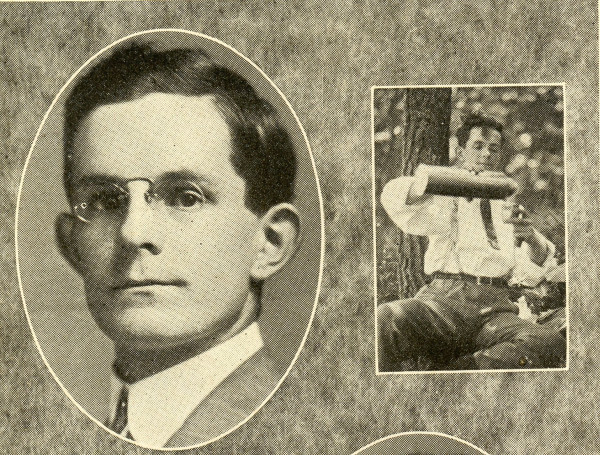 Hineline documented a Beloit just prior to the exodus of men during World War One, with closer ties to the 19th century than to the Jazz Age. Edward Dwight Eaton was in the last years of his lengthy presidency before giving way to the more progressive style of Melvin Amos Brannon. Hineline’s photographs reflect a gentle period in Beloit College’s history. Its 400 students enjoyed recreation along the Rock River, visiting Big Hill, singing together at Chapel, studying at the Carnegie Library and in their single-sex dormitories, and, just like today, hiking across campus to classes and getting to know favorite professors. “Shrimp” Hineline’s marvelous photographs allow us to bring to life the Beloit of a century ago. We’ll provide a generous, two-part helping. 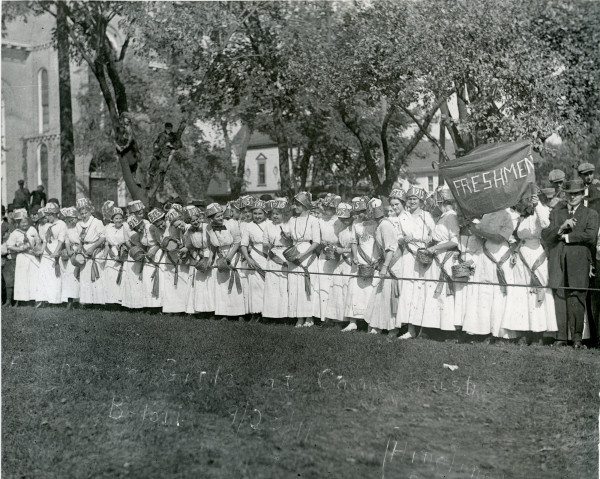 In late September, 1911, women from the class of 1915 lined up to cheer on their men at the Cane Rush, held annually between freshmen and sophomores at nearby Horace White Park. 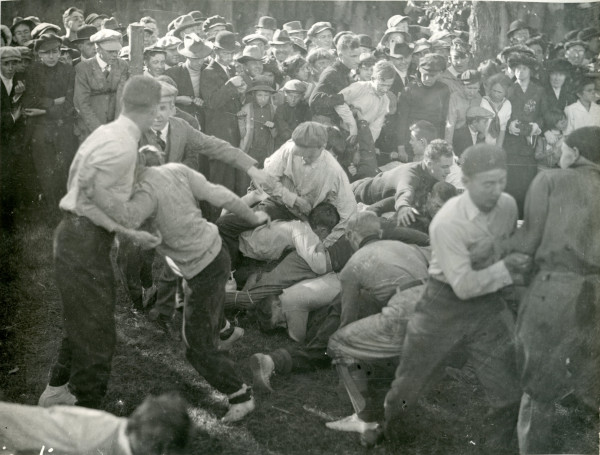 In the ensuing melee, the freshmen failed to adequately protect the piles of canes and the sophs won the contest by breaking three canes and cracking a fourth. The Round Table described their too-speedy victory as “a severe disappointment for the blood-thirsty spectators.” 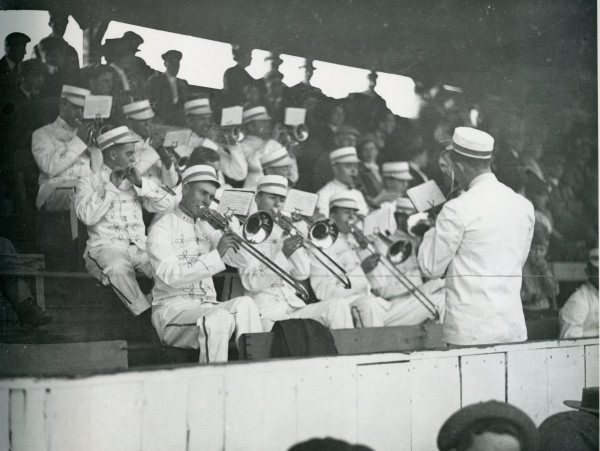 Students of Hineline’s era made their own music, from choirs and glee clubs to a mandolin club and a popular college band. When the football team played at home, the band would lead a boisterous parade from campus to the grandstand at Keep Field, site of today’s Strong Stadium. 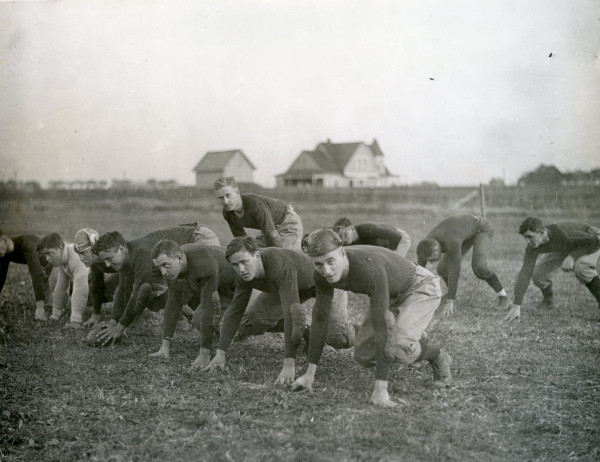 The football team prepares for battle in October 1913. Fifth from left in front is star guard George C. Fucik, later a member of Beloit’s Athletic Hall of Honor. The 1915 Codex commented: “Greater athletes than he may have lived, but we doubt it.” 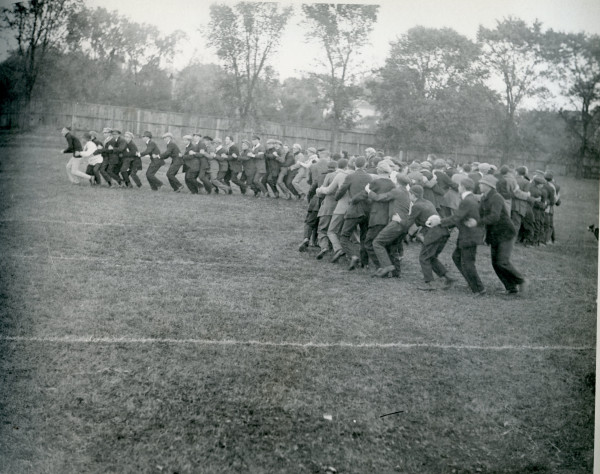 A victory snake dance after a football game in 1912. Such sights were common that year, as the football team lost only one game out of nine, crushing opposing teams by such lopsided scores as 74-0 and 65-0. 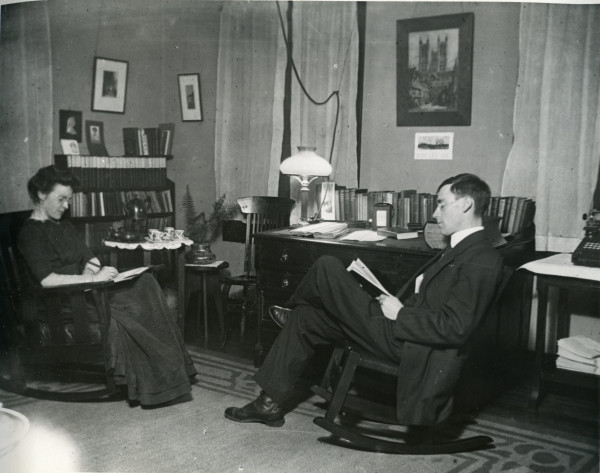 George Carpenter Clancy was a popular professor of English and Rhetoric from 1911 to 1945. In January 1912, he and his wife Bernice resided at 717 Emerson Street, without cell phone or television, but with plenty of books and a darling tea set. 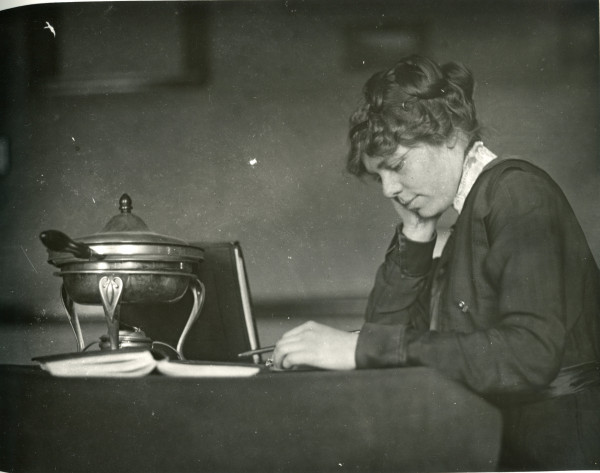 Ruth Higley Rau, class of 1915, in the classic, pensive pose of a student absorbed in her work. Perhaps the little stove kept a snack warm. We hope it didn’t set her notebook on fire. 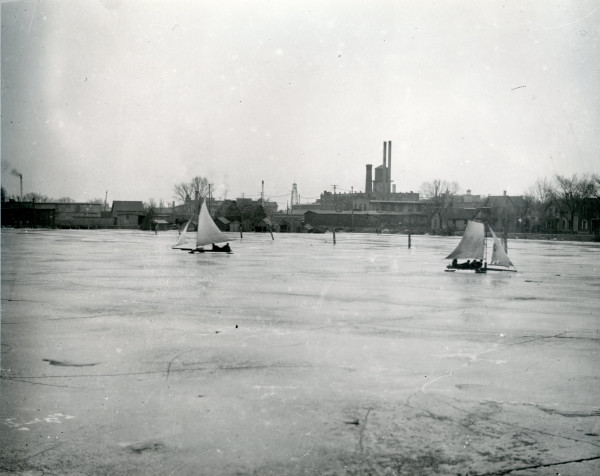 In Hineline’s day, students and others enjoyed boating on the Rock River, even in winter, when he photographed these ice yachts in December 1911. 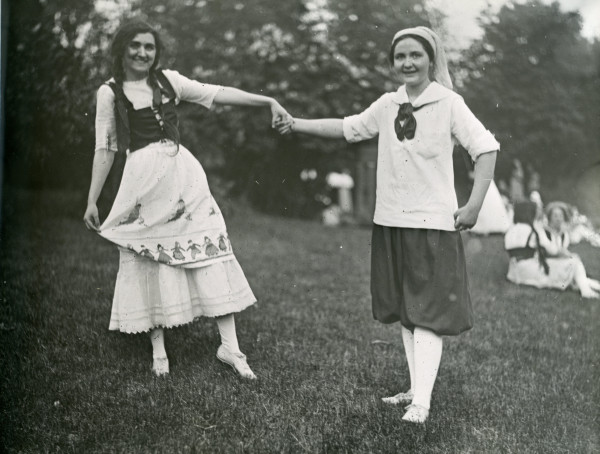 Hineline captured scenes from the second annual Gymnastic Festival, held at Emerson Hall on May 21-22, 1912. “The most delightful feature of the program,” the Codex explained, “was the Danish, Swedish and German folk dances by the girls in their colored costumes of those countries, with the appropriate national airs as accompaniment…” 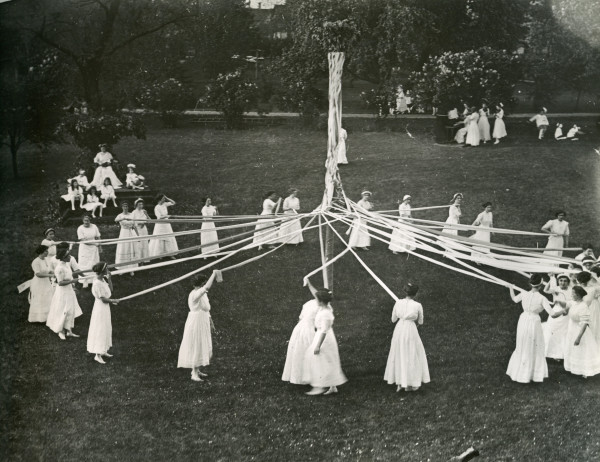 “The festival closed with the graceful dance and braiding of the colored ribbons of the May Pole.” – 1915 Codex. 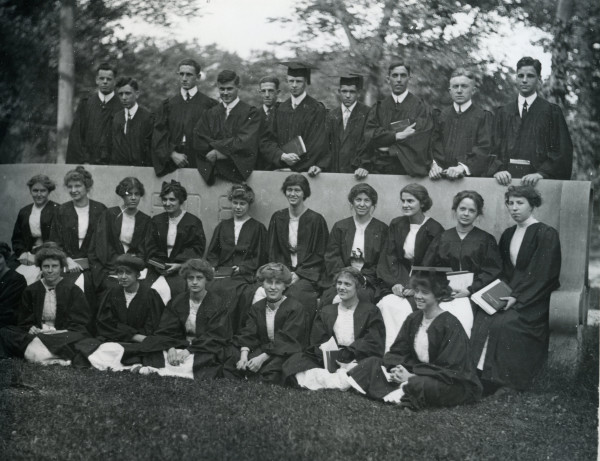 Although phonographs existed, this was an era when people enjoyed singing as a favorite activity. Greek groups sponsored informal sings. Students crowded around dormitory pianos. Students organized sizeable men’s and women’s glee clubs, and Professor James T. Sleeper directed the Associated Choirs, including the Vesper Choir, which sang frequently at Chapel services. Here they gather at the Senior Bench, a gift from the class of 1908. It stands today near the north side of Eaton Chapel. 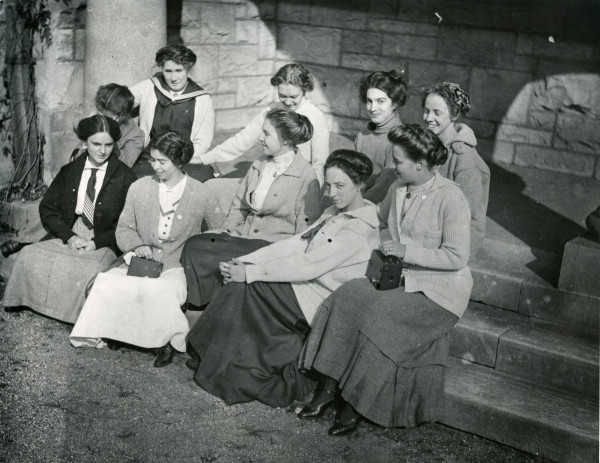 Every generation of college students finds pleasure in just plain hanging out together. Hineline photographed these women on the chapel steps in 1911. Two of them, clutching their own Brownie cameras, may be waiting their turn.