HomeLibrary & Information Technology Services Fridays with Fred: Beloiters show their true colors at the turn of the century

Fridays with Fred: Beloiters show their true colors at the turn of the century

It is always deemed a just thing that one should show his colors. But where are Beloit’s colors? To be sure she does show her colors in the noble men she has sent out, but what is her badge in distinction from other colleges?

Judging from the writer’s lament, Beloit College spent its first 30 years colorless. By the last quarter of the 19th century, Harvard had claimed crimson, Dartmouth adopted green, and Yale chose blue. Williams, Amherst, and Western Reserve, explained the Monthly, elected a color “somewhat the appearance of a boy after bathing for a half hour in ice-cold water.” The student editorialist suggested that Beloit embrace red, white, and blue, “acknowledging that the college is a child of the republic, a true son of liberty.” 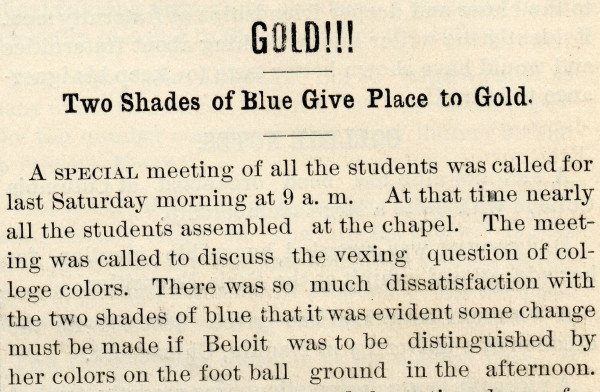 Apparently Beloit students felt otherwise. By 1878 Beloit’s colors were “ecru and navy blue.” Ecru, which sounds like a species of extinct flightless bird from New Zealand or perhaps Australia, is, as Wikipedia precisely informs us, a “greyish-pale yellow or a light greyish-yellowish brown” color. The color confused Beloit students and confounded their tailors some years later, when attempting to craft Beloitian versions of the striped woolen blazers and caps popular among young folk of the 1880s. By November 1889, as frustration boiled over into incipient student protest, the college faculty formed a committee to look into “the matters of college colors.” President Edward Dwight Eaton, along with professors Erastus G. Smith and Charles A. Bacon, huddled in conference with students, debating over the merits of various color combinations and single colors, seeking something unusual, something not already claimed by another college.

On Tuesday, Dec. 3, 1889, they were ready for an announcement after chapel services. By a narrow vote the college adopted navy and sky-blue as its colors. No one was particularly happy about it, as reported in the Round Table:

There seems to be a great deal of opposition to the new colors of the college, and many who voted for the navy and sky-blue are far from being satisfied with them. The point in favor of the adoption of these colors which apparently gave them the small majority they received was the originality of the combination, no college in the United States having two shades of any one color. Originality is a grand thing, but there are original conceptions which no one need get a patent on…We do not believe that navy and sky-blue will ever become popular with the students and much less with alumni… 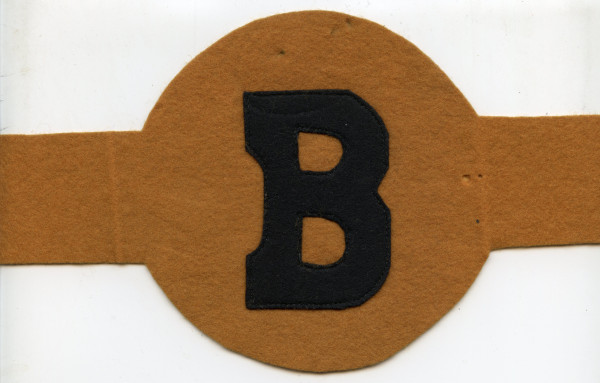 The editor had a point. On Dec. 14 at 9 a.m. practically the entire student body assembled at the chapel and warmed the frigid air with the fiery heat of their debate. There was some urgency required because later that afternoon the college “foot ball” team would make its debut against UW-Madison. As a Round Table reporter commented, “…some change must be made if Beloit was to be distinguished by her colors on the foot ball ground.” One of the students in charge set forth a motion to adopt a single shade of blue. No! No! Boo – hiss! Blue won’t do. Then another student popped up and urged his fellow juniors to sacrifice their “class color,” gold. Yes! Yes! Huzzah! A motion for gold carried almost unanimously and later met with favor from the ever-watchful student newspaper:

This, it seems to us, is the best single color that could be found. No other college, to our knowledge, has this color, and besides it is a pretty color…There is richness and meaning enough in it to represent Beloit College…Let it, then, be accepted by all, and established as a permanent color for Beloit College. We want a color that shall be kept for all time and not be changed every few years, a color that shall mark every one that wears it as a Beloit student or alumnus, wherever he may be. As a Yale man is known by the blue, a Harvard man by the crimson, a Princeton man by the orange, so in a few years a Beloit man shall be known by the gold. 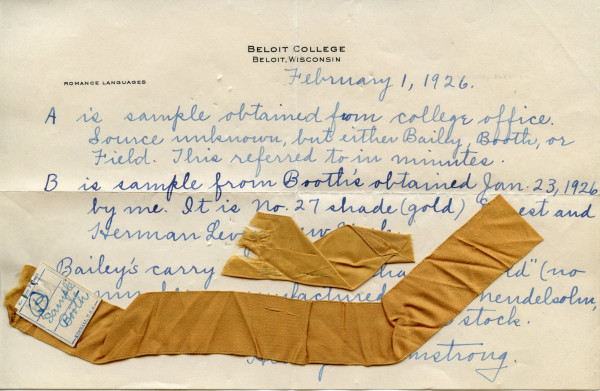 Although happy with gold, the college hadn’t yet officially committed to it. In early 1890, a committee of students composed a letter sent to every alumnus of the college, seeking approval of the new college color. Of the 81 responses received, 76 alums approved, three disapproved, and two were indifferent. Stanley Lathrop, class of 1867, wrote: “I vote most heartily for the gold; old Beloit always had a heart of gold and it is fitting to show it in such a way.” T.L. Riggs, class of 1868, said simply, “Give us gold.”

On March 21, 1890, gold became the college’s official color, as noted in the faculty minutes:

Voted that the Faculty concur in the decision of a majority of the Alumni in regard to college colors, and that the President be requested to communicate this action to the students.

But what, exactly, is gold? No one quite agreed on the particular shade. Banners and pennants and college sweaters appeared in a dizzying array of yellows, some lemony bright, others mustardy dull. In January 1925, the college formed a “Special Committee on College Colors.” By November they had their answer, as documented in the faculty minutes:

Back in the 1920s, football coach Tommy Mills discontinued the practice of giving letterwinners gold-colored sweaters adorned with a black B, in favor of blue and gold sweaters, but later college historians, including first archivist Robert K. Richardson, agree that doing so was wrong-headed. For a couple of decades in the 20th century, college athletic teams battled under the moniker, “The Blue Devils,” before giving way to the Buccaneers in 1949. When did blue become Beloit College’s second official color? So far archival files remain mute. 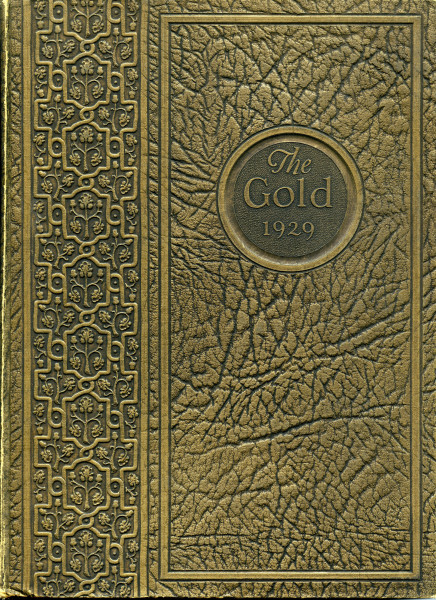