A look at the “Bucket Brigade” as photographs by Ray Metzker.

In the early 1990s I received a phone call from Beloit College Alumni Director Joe Kobylka, inviting me over to Middle College. Joe, always gregarious and the friendliest of men, met me at the door, shook my hand, and then ushered me down to the basement where he led me to a spacious room filled with treasures. For a young archivist it was like stumbling upon Ali Baba’s secret cave. Stacks of framed photographs. Piles of scrapbooks bursting with Beloitian memorabilia. Heaps of dusty volumes of the college yearbooks, Codex and Gold. Here and there, the odd loving cup, a blue and gold banner and a box filled with remnants of the original Field House floor, wood varnished to a golden brown, once trodden on by legendary Beloit athletes. 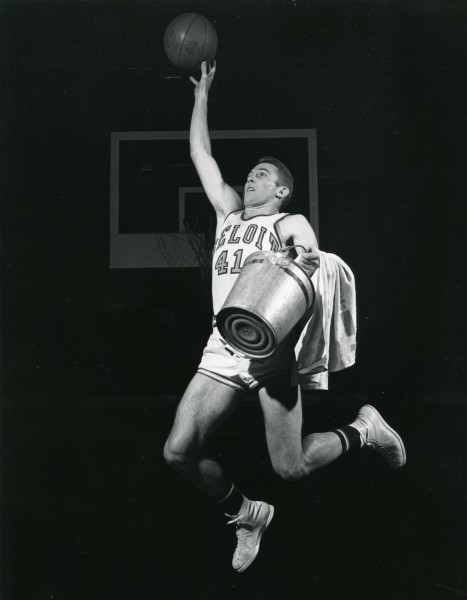 “Take a look over there,” Joe said, pointing at a couple of battered 1950s-era file cabinets. I opened drawers to find folder after folder documenting some 50 years of Beloit College athletic history. There were countless programs, press releases, brittle newspaper clippings, and best of all, photographs. Nestled amidst team photographs and ordinary-looking portraits, were dozens of stunning images taken by the supremely talented Ray Metzker for the Beloit College News Service between 1950 and 1953. Joe smiled. “They need a new home,” he said, “and we need the space. Let’s have Phys Plant haul’em over to the College Archives.”

Ray Metzker’s tenure as the college photographer coincided with one of the most exciting periods in Beloit College’s athletic history. When famed coach Dolph Stanley took on the college’s basketball team in 1945, he inherited a moribund program that had not fielded a winning team since 1939-40. Within a couple of years, Stanley’s teams posted win/loss records of 22-5, 24-3, 29-4, and 25-3, ultimately leading to Stanley’s 238-57 coaching record at Beloit College and enormous crowds flocking to the new college Field House. 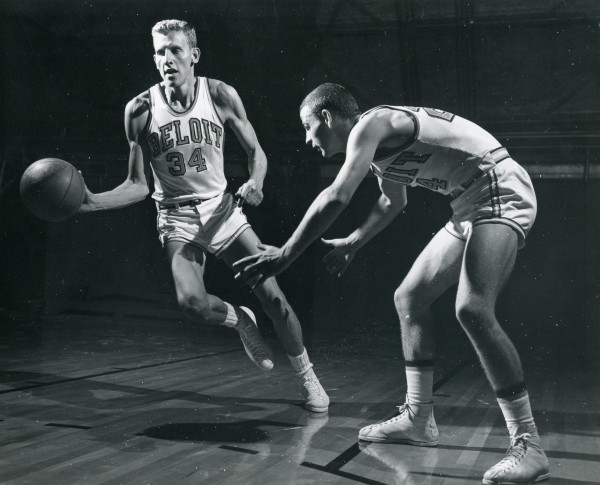 Dubbed the “Bucket Brigade,” Beloit’s hoopsters routinely dominated such large university opponents as Valparaiso, Indiana State, Brigham Young, and Bowling Green. The team crushed its Midwest Conference opponents, winning every conference game between the 1947-48 and 1950-51 seasons, sometimes by outlandish scores, among them 111-41 and 122-43 victories against Knox and Monmouth, respectively. After tiny Beloit College participated in the big-deal National Invitational Tournament held at Madison Square Garden, Midwest Conference officials said enough was enough and booted Beloit for not living up to the spirit of the conference. It would take Stanley’s departure in 1957 combined with two mediocre seasons for the Midwest Conference to let Beloit back in. 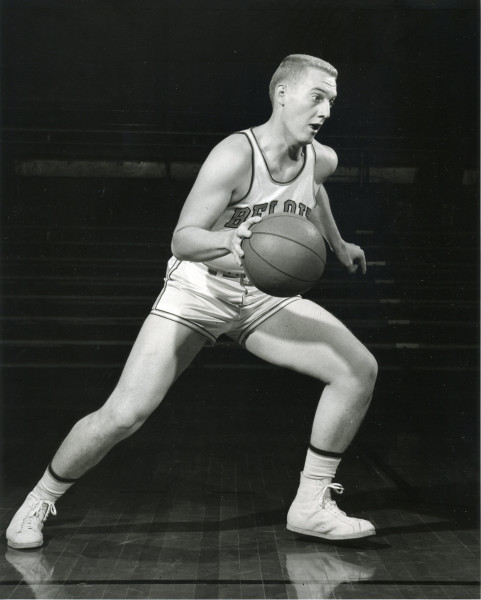 Ray Metzker must have relished the challenge of making a routine photograph eye-catchingly beautiful. While each year he dutifully photographed individual players, instead of lining them up against a wall for a standard headshot, he posed them in dynamic action, one player racing down the court, another leaping for the basket. In Metzker’s world, this wasn’t simply basketball, but something akin to hoopster ballet. His flair for the dramatic also dovetailed nicely with a gift for maximizing the contrast between light and dark. He was always meticulous in both composition and lighting, and at the age of 20 already an artist making perfect use of his black and white medium. Metzker also tried his hand at in-game action shots and succeeded in capturing the tension in bulging muscles and on the determined face of each player. You can almost hear the pounding of sneakered feet thumping the floorboards and the sudden swish of the basketball driven through the hoop. 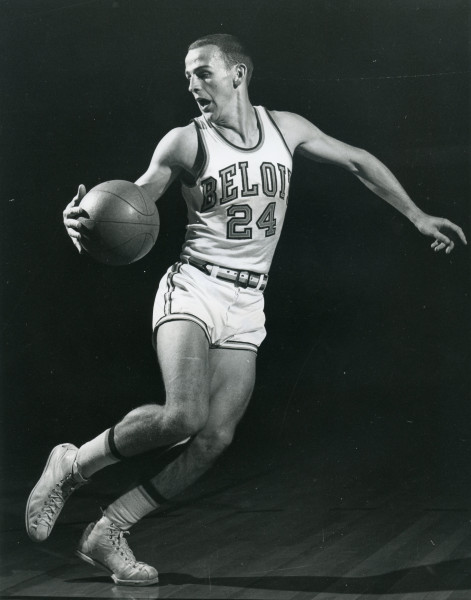 Ray Metzker graduated from Beloit College in 1953 and went on to a distinguished career as an art photographer. In honor of his outstanding early work as Beloit College News Service photographer and in celebration of the new basketball season, here are a dozen Metzker photographs pulled from the files, with many more hidden in their depths, awaiting rediscovery. 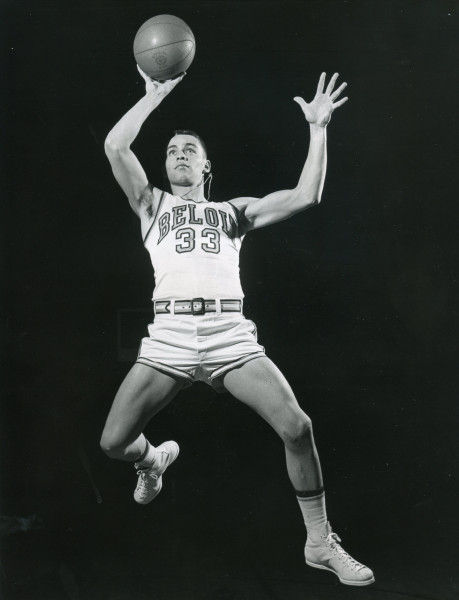 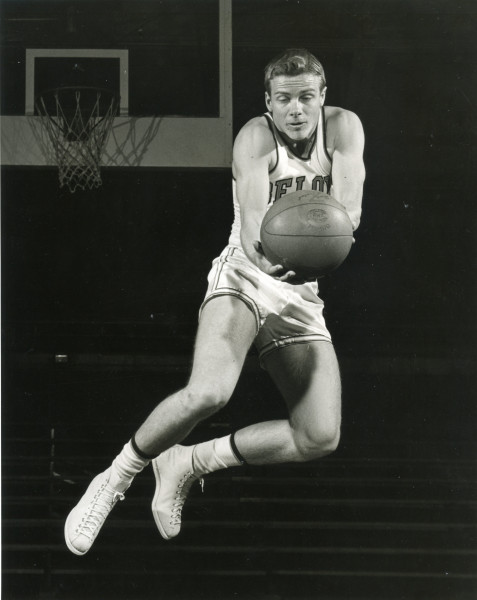 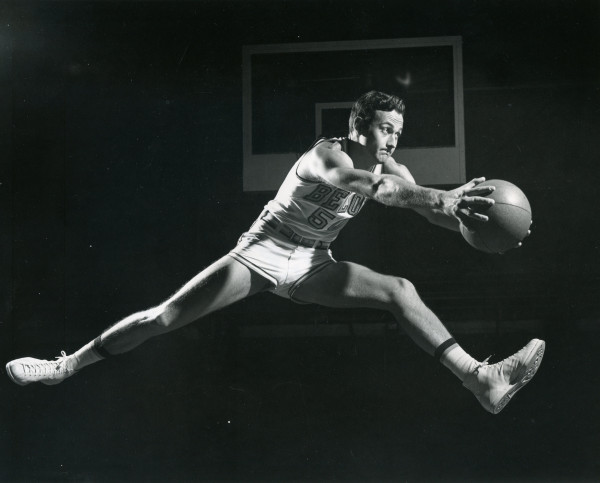 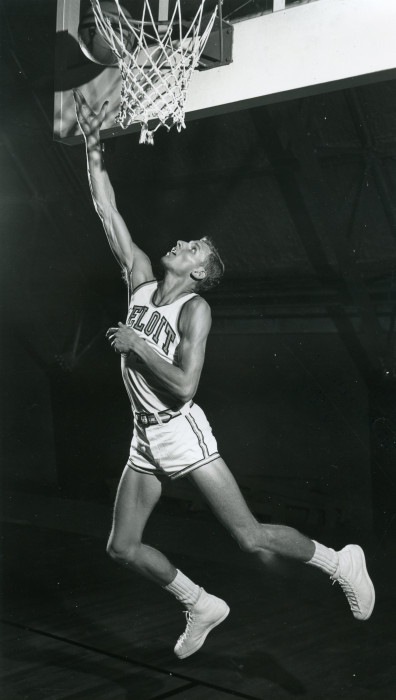 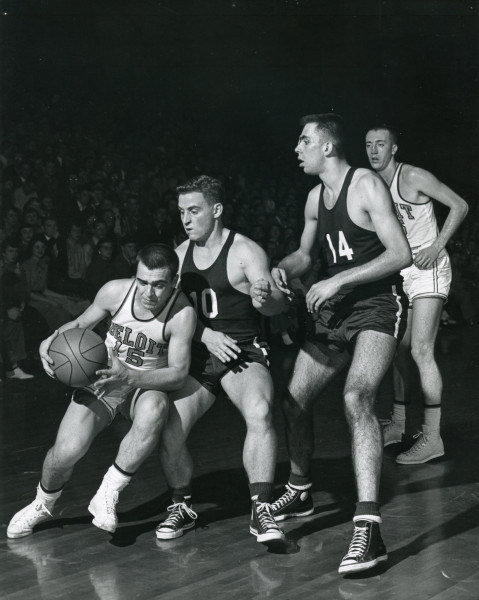 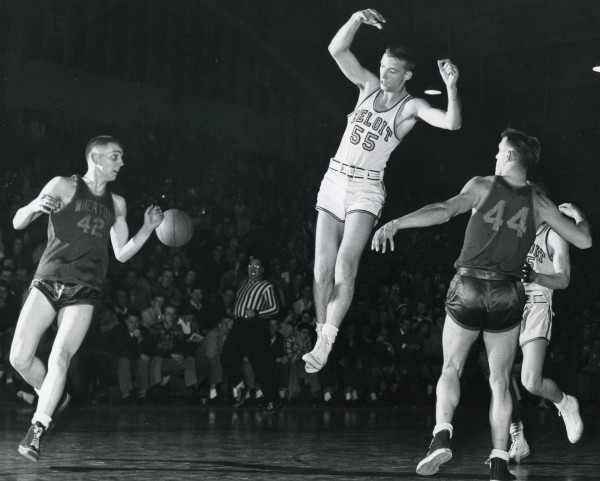 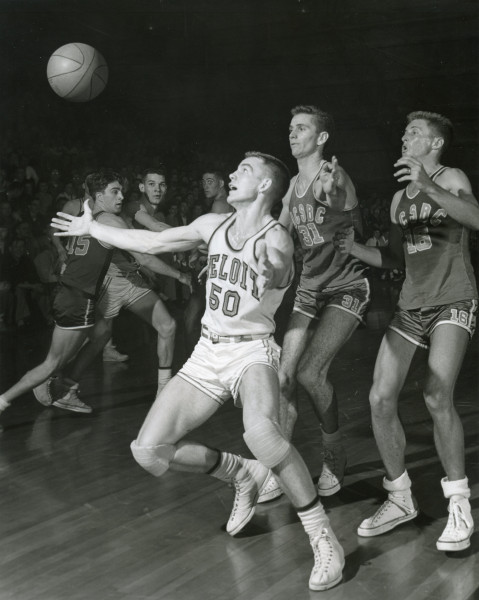