Fridays with Fred: Archivist plays ‘what if…’ with campus buildings

Fred imagines how Beloit could have been different.

Sometimes I like to close my eyes and play the Beloit College “what if” game.

What if D.K. Pearsons had a twin brother named Hezekiah, equally interested in higher education, equally the rich friend of Beloit College? When we feel a tad famished, would we rush over to the college’s beloved snack bar, “Hezekiah’s?”

What if the college had decided not to rebuild Eaton Chapel after its disastrous 1953 fire and instead constructed a longed-for performing arts center? Come 1973, would we still break ground for Neese Theatre? And, if not, would the landmark, oft-lamented limestone observatory have survived? 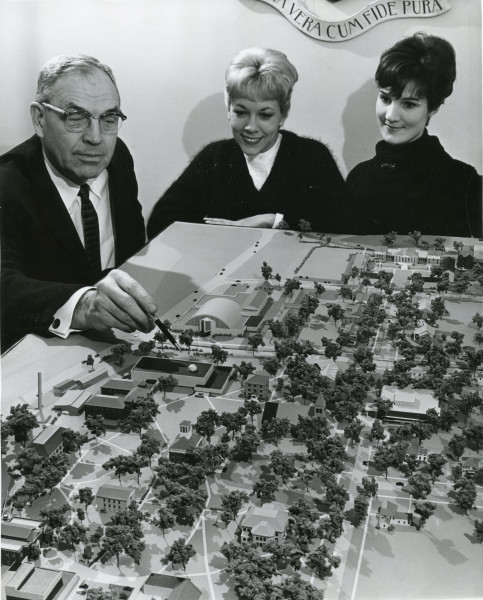 These questions tend to snowball, while also leading us down unexpected avenues and flights of fancy. Surely some unseen master hand guides our alternative campus master plan. As hovering onlookers, let’s gaze down below with a smile and explore the first of a two-part alternative history of Beloit College buildings. 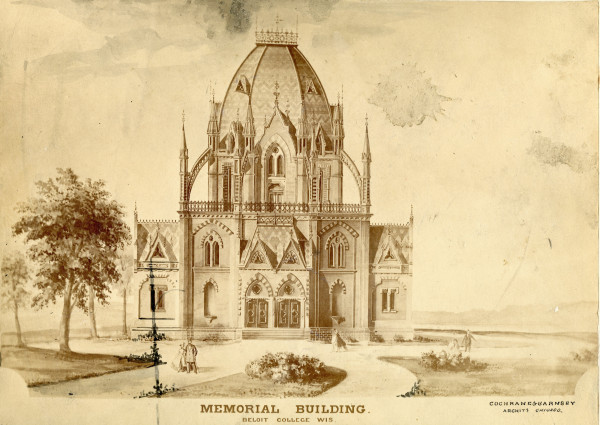 When President Aaron Lucius Chapin declared, “a monument ought to be of stone, not brick,” he probably did not have in mind a structure bearing a passing resemblance to the Taj Mahal. Perhaps the college couldn’t afford to bring to life Cochrane & Garnsey’s ornate design or perhaps its gaudiness offended the famous old guard’s puritanical sensibilities. Instead, they settled on a more conservative, though still elaborate, memorial to the community’s Civil War casualties. Professor Emerson called the college’s new library, “a chaste and elegant edifice of limestone in the modern gothic style.” Today it houses the Logan Museum of Anthropology. 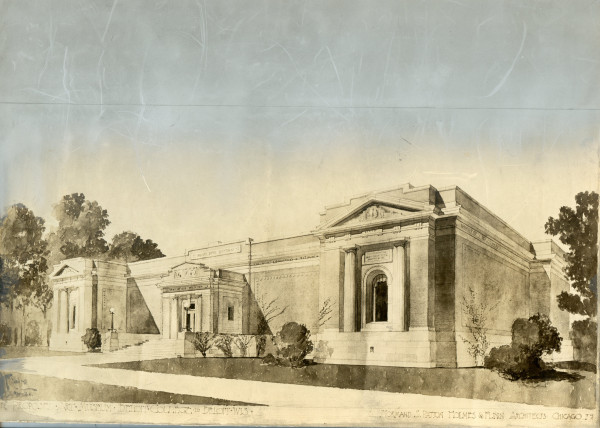 In the early 20th century, while Beloit College’s art hall collections rapidly outgrew their cramped quarters in South College, curator Helen Brace Emerson continually lobbied for a new building. The college planned to partner with the city of Beloit in fundraising for a building they envisioned as community-centered. Somewhere along the line, Normand S. Patton, class of 1873, drew up plans for an imposing structure featuring three sets of Doric columns. Patton was a well-known Chicago architect whose firms designed many an academic building, notably at Beloit College and Carleton College. Difficulty in securing finances, a change in administration, the death of Helen Brace Emerson and the upheaval caused by the Great War, torpedoed the project. The college revisited the idea with a new architect and broke ground for the Theodore Lyman Wright Art Hall in 1929. 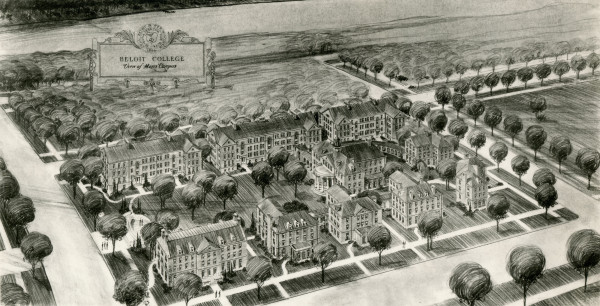 Beta Theta Pi became the college’s first fraternity in 1860. Others followed suit, all with chapter houses off campus, some many blocks away. By the 1920s, the college hoped to reign in its often rambunctious fraternities by providing space on campus. A proposed fraternity quadrangle from 1928 included a central commons building. Although the quadrangle never quite materialized, a one block stretch of College Street eventually harbored most of the college’s fraternities and sororities. 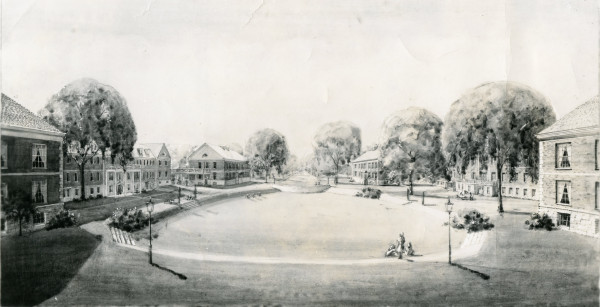 Beloit’s student population boomed after World War II and President Carey Croneis spearheaded a number of plans for expansion on the residential side. Fundraising literature from Beloit’s 1946-47 Centennial Development Program, tells the tale:

Homes for women students…as visualized by the college architect, the Women’s Quadrangle will consist of six buildings, three each on east and west sides of College Street, which has been closed to form an amphitheater which will serve for various sports, college plays, entertainments and public gatherings. The “Quad” is shown looking south on College Street. The two units on the right have been completed.

In our alternative Beloit universe, a burly student from Philadelphia, wearing a blue and gold letterman jacket, hails his bearded friend in the plaid shirt: “Yo Fred, want to hang out at the refectory, chow down on a burger and fries?” The Centennial Development Program booklet, portentously entitled, “Bulwark of Freedom,” explains:

All-student union and commons…Architect’s conception of one of the college’s most urgently needed buildings. It will provide a refectory for both men and women students, with refined and comfortable quarters where students may spend some of their rest hours, also included. This new structure will stand between the men’s dormitories and the new women’s quadrangle at the northern end of the campus.

Students had to wait until 1957 for their new student union, when the college renovated the Smith Gymnasium. Smith’s rather plain brick façade, however, bore little likeness to the earlier architect’s rendering.

The Centennial Development Program also called for remodeling the college’s outdated Carnegie Library into a Music and Dramatic Arts building, with plans for a new library and recitation hall located at the northwest corner of campus, next to Pearsons Hall. Without the requisite funds, however, the college shunted aside the idea and waited fifteen years to build Morse Library. In 1964, with the college’s increasing emphasis on its World Outlook Program, old Carnegie transformed into the World Affairs Center. 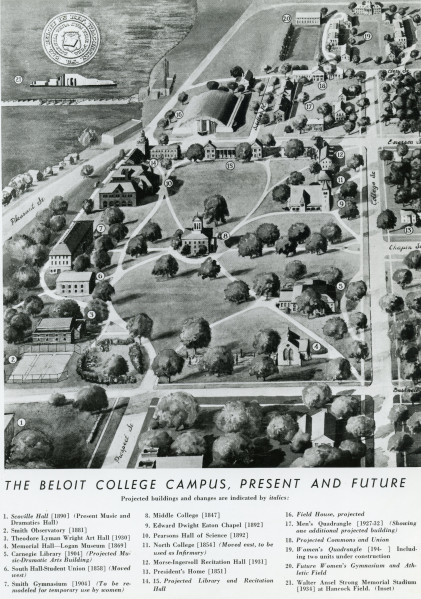 The campus master plan, drawn up in 1946-47, included many familiar buildings as well as some drastic changes, notably an Art Deco-style Strong Stadium floating in the Rock River next to the college seal, which no doubt served as some sort of gargantuan buoy, anchoring the entire campus in place.