College dorm rooms of the past.

If we could establish a museum of Beloit College history, it would be a joy to recreate student rooms from different eras, exploring the colorful variety of bric-a-brac, equipment, wall decorations, and furnishings. While fashions change, we would surely discover common elements as well. Few items from student rooms have found their way to the Beloit College Archives, but written accounts and photographs tell the story. 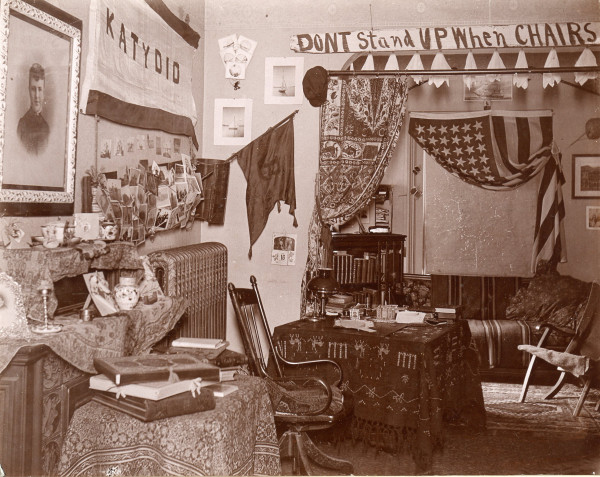 Before Beloit College built its first dormitory or residence hall, most students roomed in town. With only one janitor to oversee the entire campus, however, a few students lived in the college buildings and contributed to their upkeep. Very gradually, the college added dormitories while also allowing students to live in off campus fraternity houses and social clubs such as the “Dew Drop Inn.” Although no photographs exist of student rooms prior to the 1890s, we glean a few details from student diaries and letters. Students on campus put up with rooms so frigid that water in their wash basins froze overnight. With no indoor plumbing, they made do with pump water and chamber pots. Nearly every student narrative describes endless wood chopping and fire stoking. Reminiscing years later, George Collie, class of 1881, described living conditions:

The college dormitories were bare, cheerless rooms containing a stove, table, two wooden chairs, a bed stead and husk mattress, a wash stand and pitcher. If we had livable quarters it was necessary to bring draperies, pictures, rugs, easy chairs, bedding, soap, towels, bed linen and blankets from our homes. 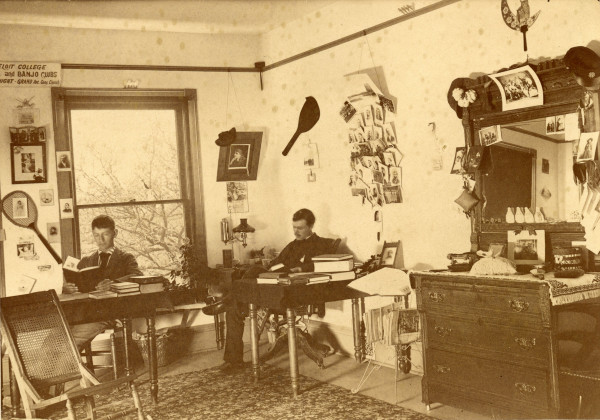 By the 1890s, Spartan living conditions began to give way to Victorian-style opulence and clutter as shown in this Herbert Gaytes photograph of Academy student John Curtiss’s room at Sereno T. Merrill’s house. Another photograph from the same era depicts a studious pair cramming for exams in the “Beta Lodge.” 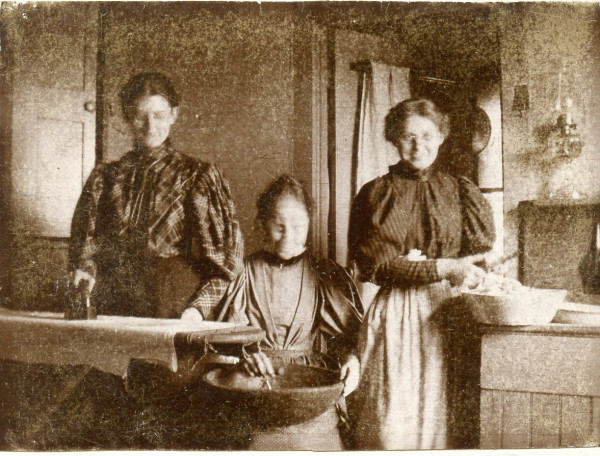 When women entered Beloit College in 1895 they lived in remote cottages on the far side of campus where most of the residence halls are now. A tiny, grainy, exceedingly rare photograph depicts a kitchen scene at Rogers Cottage in 1897. 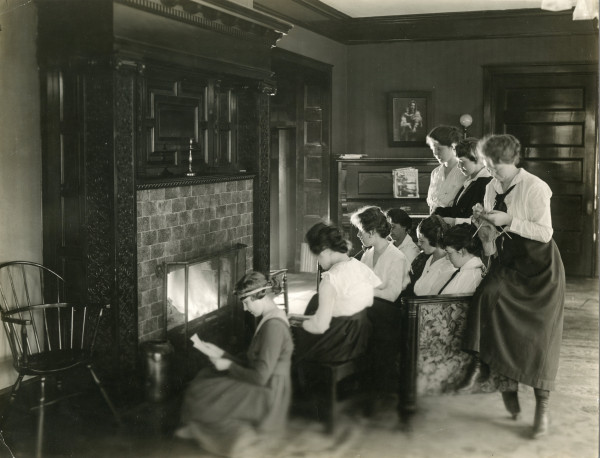 A year later, the college dedicated its first women’s dormitory, Emerson Hall. The enormous brick building provided a cozy parlor where students banged out popular melodies on an upright piano and sought warmth from a lively blaze in an elaborate fireplace, as shown in a photograph from the teens. 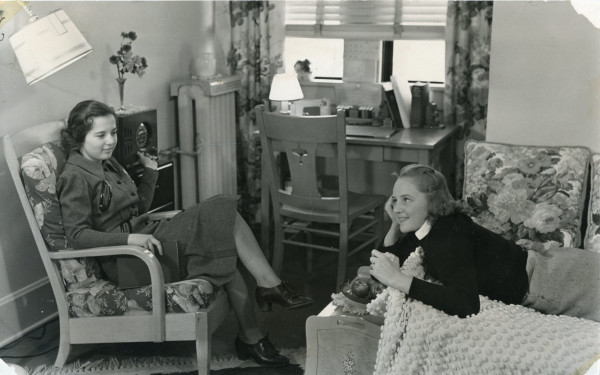 College publicity stills from the 1930s project a warm and friendly atmosphere. Two women relax in old Chapin Hall, munching apples and listening to the radio, while across campus pipe-puffing men gather for a “bull session,” attired in suave pajamas and dressing gowns. 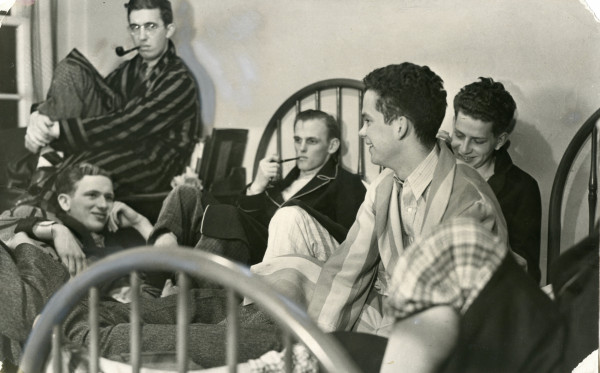 Post-World War Two found the college coping with the effects of the G.I. Bill. The original caption for this photograph, entitled “An Education at Any Price!” reads: 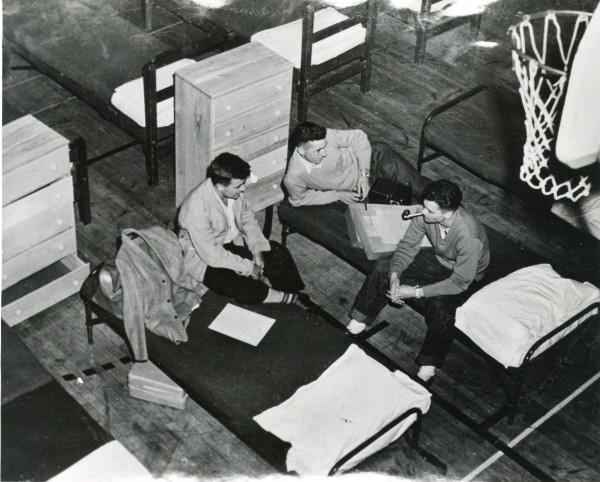 Eagerness of former GIs for an education has crowded the nation’s colleges. Above, three ex-servicemen sleep in Beloit College’s gymnasium for first week of school “sweating out” the completion of temporary housing units. 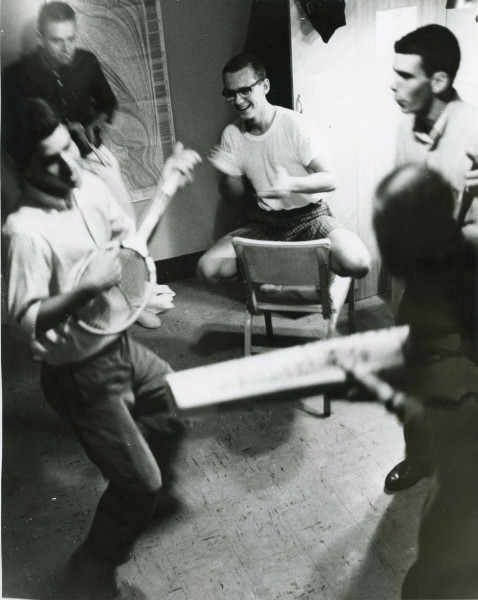 Students have always enjoyed making music, from early glee, banjo, and mandolin clubs to jug bands, bebop, and punk rock. As they always say, if you don’t have a guitar handy, try an electric tennis racket. Perhaps an alumnus can identify the year and place of this impromptu jam session. 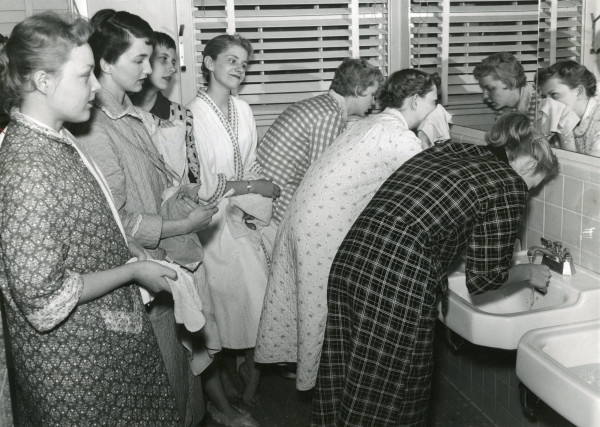 A long wait attests to the lack of available sinks in Maurer, a women’s dormitory built in 1946. The photo dates from 10 years later. 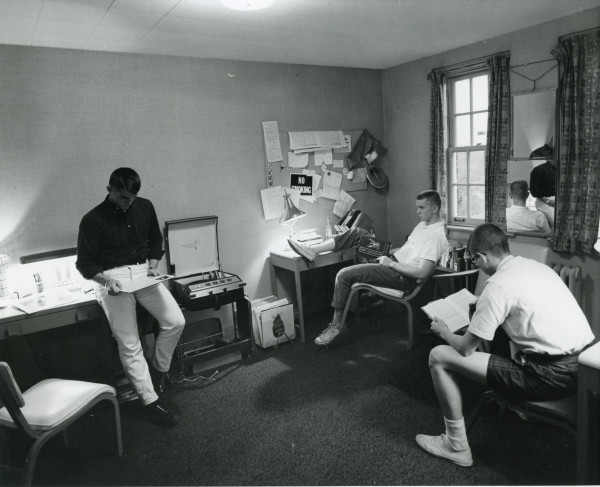 A student in the early 1960s peruses a manual for his fraternity, Sigma Alpha Upsilon, while one of his friends reads a book and the other studies an album cover. Upside down, Johnny Mathis ponders his future. The Beatles are coming! The Beatles are coming! After 1963 and the advent of the “British Invasion,” the crooner would not score a top 40 pop hit again until 1978. 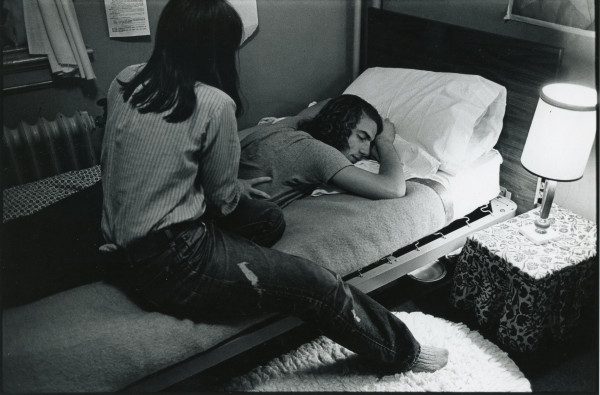 By 1970, coeducational residence halls replaced single-sex dormitories, women no longer had to sign in and sign out, and “gentleman callers” came and went as they pleased. 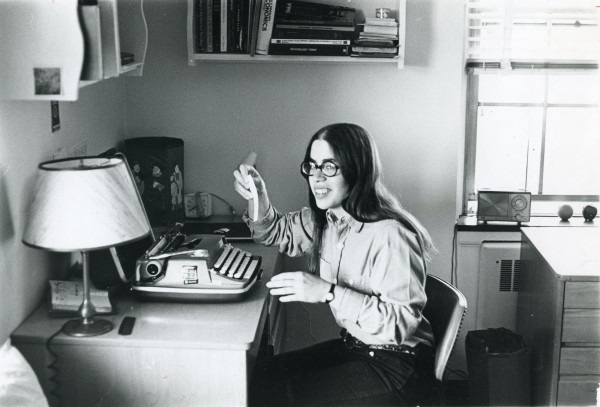 A student gamboling down a residence hall corridor in the 1970s and 1980s would no doubt hear the familiar din of clacking keys and dinging bells of typewriters at play, even on a “quiet floor.” Bottles of correction fluid and strips of correction paper did the job that a computer’s “backspace” performs today. 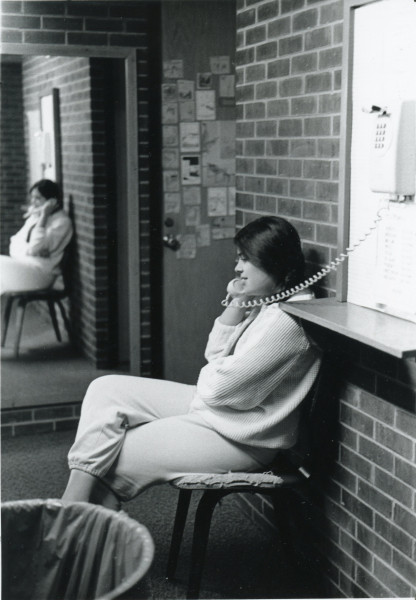 Before cell phones became ubiquitous, students competed for use of hallway telephones, as shown in this 1985 view taken in one of the ’64 Halls. 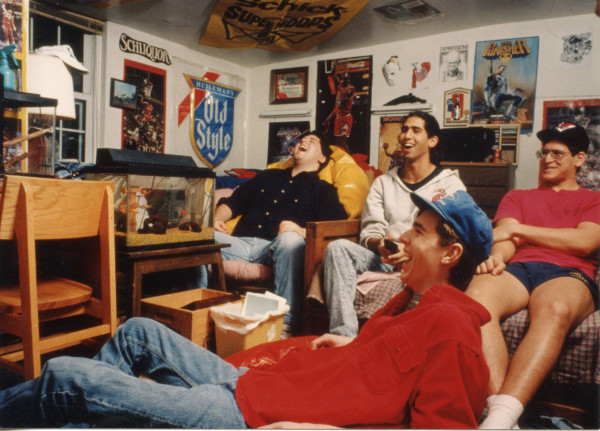 A room, circa 1990, seems just about as cluttered and lived-in as one from a century earlier. 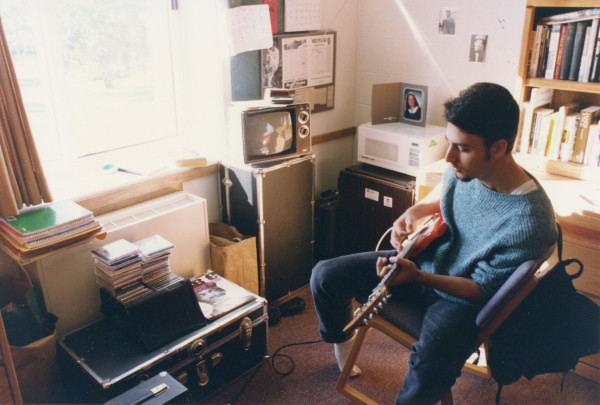 Technology began to hold sway by 1993, replete with microwave oven, refrigerator, television, electric guitar, and CDs. What does the room have in common with one from 1893? Books.