Fridays with Fred: New England pioneers, and an eponymous park

The founding of Beloit with a focus on Horace White.

There came westward in the winter of 1836-37 the emissary of a New England community who chose this spot for a future home and gave this park to adorn the town thus founded. The talents and labors of his son were devoted to the service of the nation. This monument is erected to their deeds and the beauty of their character.

– Carved on the monument at Horace White Park 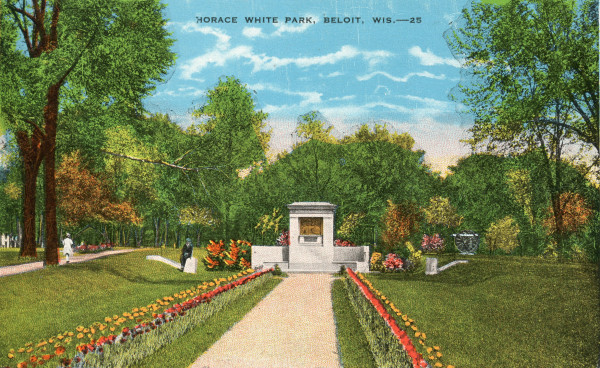 One October, as the leaves turned golden, orange, and fiery red, the young men of Colebrook, New Hampshire, gazed westward and pondered their futures. The most enterprising among them gathered together and formed the New England Emigrating Company, with plans to move en masse once they settled on the best location.

They selected 27-year-old physician Horace White (below) as their agent, and that winter of 1836-37 he set out on a long, arduous journey, often traveling by cutter (a small horse-drawn sleigh). He visited promising and not-so-promising regions in Iowa and Illinois and one day happened upon a lovely valley in Wisconsin Territory. He stood on the eastern bank of the Rock River, gazed at its pristine, fish-filled waters, and liked what he saw. Unbroken prairie spread far into the distance, its rich soil ideal for farming. Bur oak trees stretched their gnarly branches high on a nearby bluff, the perfect site – although he didn’t know it yet – for a college. 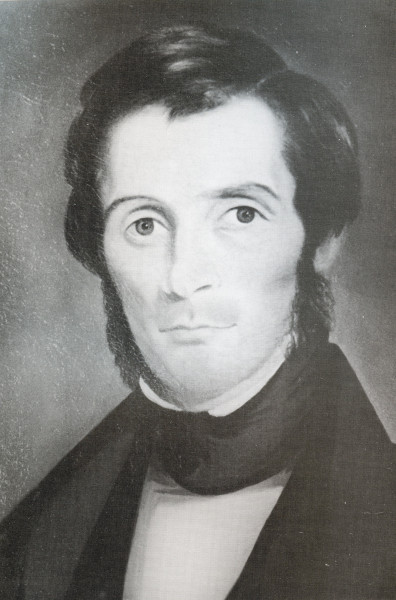 White hunkered down with an earlier settler, Caleb Blodgett, worked out a deal for land, and then went home, where he told everyone he’d found just the place for resettlement. Over the next few years, citizens from Colebrook and elsewhere populated Turtle, which changed its name to Blodgett’s Place, then to New Albany, and finally to the more original and euphonious Beloit. In the meantime, Horace White had brought out his wife and young son, Horace White, Jr., and continued with his pioneering efforts. In 1837 he supervised the Kelsou Survey, which mapped existing properties and planned a grid of streets that did not yet exist, including, presciently, a College Street. He also set aside a sizeable tract of land as a public park on Beloit’s east side, for decades known simply as “City Park.” 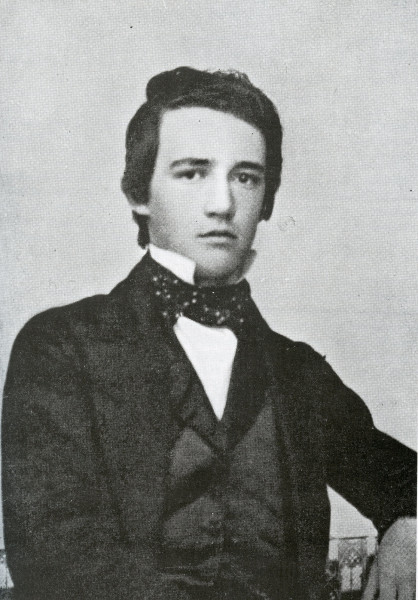 Horace White passed away in 1843 while still a young man. His son (above) grew up in Beloit and attended Beloit College, graduating in 1853, only its third class. Horace White, Jr. became a nationally famous journalist, first in Chicago, where he made a name for himself traveling with Abraham Lincoln and covering Honest Abe’s celebrated debates with Stephen A. Douglas, and then in New York as editor of the New York Evening Post. He remained a loyal friend of Beloit College, serving on its board of trustees, and, through his friendship with Andrew Carnegie, securing the construction of a new library, the building we know today as the World Affairs Center. 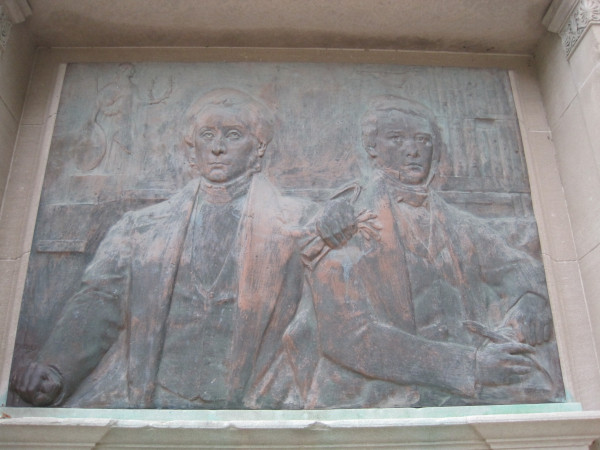 In later years, Horace White, Jr. often turned his mind back to Beloit’s pioneer days, and he concluded that there ought to be a lasting tribute to the man who had chosen the site for his Colebrook neighbors. Although he did not complete plans before his death in 1916, his family decided to carry out his wishes, with one change – the monument would serve as a tribute to father and son. White’s son-in-law, the New York architect, John Mead Howells, (son of renowned author William Dean Howells), designed the monument and commissioned sculptor, Francois Michel L. Tonetti, to create the bronze bas-relief depicting the two Horace Whites. 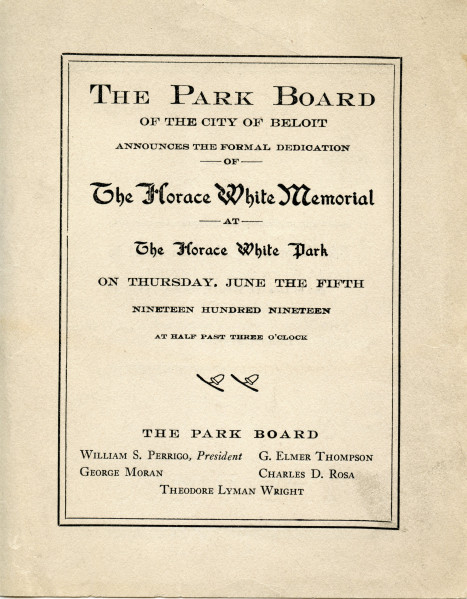 By October, 1918, the monument was in place, as described by the Beloit Daily News:

The memorial is in stone, semi-circular in form, and is in a sunken garden with a broad path leading direct to it from Public Avenue. The memorial is banked by fir trees that will remain green the year around. Shrubs that have been planted in rear of the memorial will add to its beauty. The artistic design of the memorial is recognized by authorities and critics as one of the finest conceptions developed in this country.

A Beloit College student strolling from campus down Public Avenue early that month would see an oversized cloth draped over the bas-relief portion of the monument. The city parks board planned an elaborate dedicatory ceremony and unveiling for Oct. 10, only to see their hopes dashed by the great influenza epidemic of 1918, which wreaked sad havoc on Beloit. The city enforced quarantine and cancelled all public assemblies. However, a small ceremony took place with fewer than a dozen gathering for the unveiling, including Beloit College Professor Theodore Lyman Wright, a member of the city’s Park Board. Wright kindly translated the Greek inscription carved into the stone on either side of the centerpiece: “As men of high content they did their duty nobly and now how beautifully they rest – thrice happy men.” 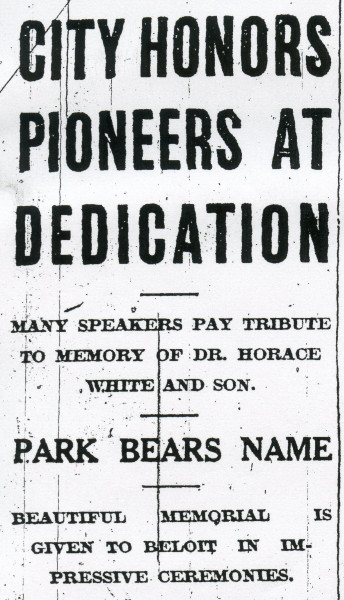 Formal dedication took place on June 5, 1919. Cloudy skies threatening rain forced the large crowd to convene at nearby First Congregational Church, where the Fairbanks-Morse Athletic Association Band treated those assembled to some lively melodies before the first of several speakers. Two of Horace White Jr.’s daughters presented the memorial to the city, which Beloit’s mayor, Joseph A. Janvrin, accepted gratefully, also proclaiming that “City Park” was from here on designated “Horace White Park.” 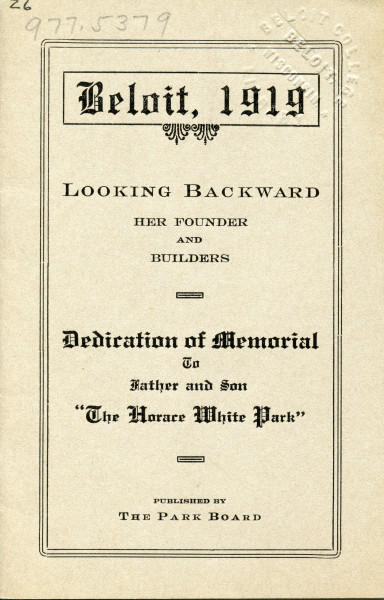 The Horace White monument stands unchanged after nearly a century. A squirrel perches on its wall before scrambling off on some squirrely business. A visitor seeks its cooling shade on a blazing summer day. It’s a peaceful place. Close your eyes and you can almost will yourself back to the Beloit of long, long ago. Professor Wright best summed up the site’s eternal appeal:

Here at this memorial, generations to come will sit facing west and give thought to the nobler things of life in God’s great out of doors, in this park where the inspiration of the lives of these two great men will forever be with us.