Fridays with Fred: Commencement, circa 1913

A look at Commencement of the past. 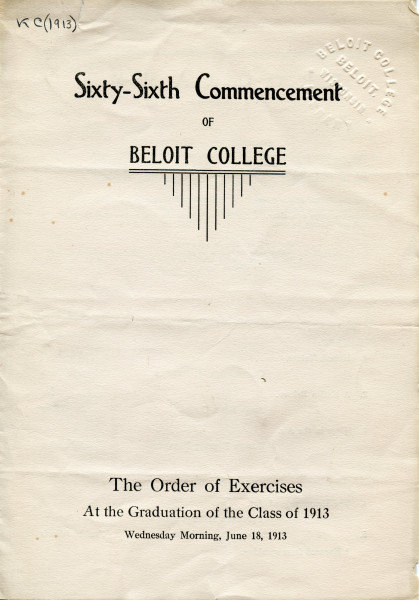 Beams of sunlight stream through gaps in the canopy of trees near the college chapel. A cardinal and robin compete with each other in a gentle contest of birdsong until suddenly drowned out by a trilling flute and the emphatic blast of a tuba as the college band warms up. A few muted guffaws emerge from faculty eyeing each other in ill-fitting caps and gowns. Two young women pat their Gibson Girl hairdos, making sure the long pins hold their caps on tight. After an early morning prayer meeting, students, faculty, and trustees gather together, form a line, and wait for the chapel bells to strike 9 a.m. It is Commencement Day, June 18, 1913. 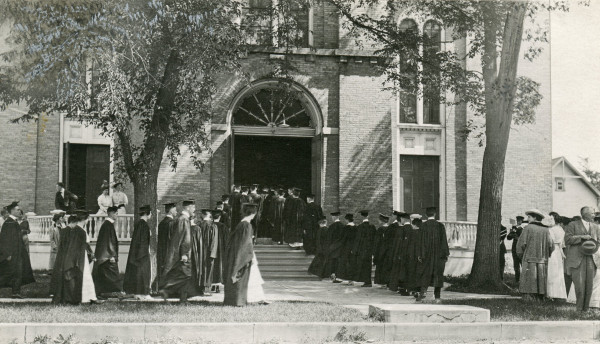 As the band strikes up a march and sets off, those dressed in caps and gowns follow them down College Street, take a left on Bushnell and head for the First Congregational Church, where a large crowd awaits them, already fanning themselves in the steamy warmth of a late spring morning. The procession ambles down the center aisle. Faculty and trustees take their seats on the platform while students fill the pews nearby. After an organ prelude, those assembled sing a traditional hymn, “O God, Our Help in Ages Past,” and then listen to the first of five speeches by graduating seniors. Among the well-practiced orations, one student discusses “the development of a new sense of social justice.” Another posits the possibility of “production of fertilizing nitrates from the air,” and still another argues that “Germany today is a mighty contender for the position of leader in international affairs and her policy is worthy of consideration and copying.” It is, of course, only a little more than a year before Germany and many other European countries become embroiled in the devastating Great War, later renamed World War One. 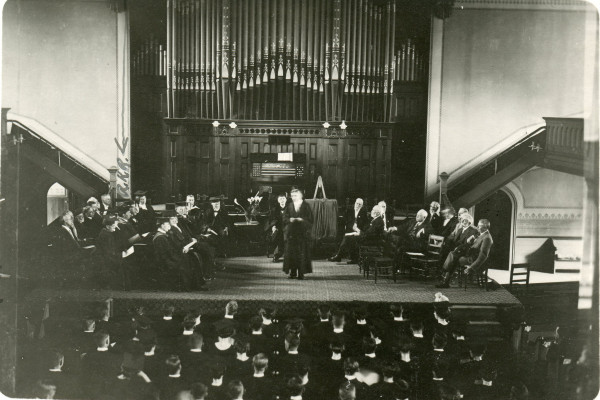 While the audience recovers from such intense speechifying, the ever-popular Beloit Girls Quartette entertains with their rendition of “The Miller’s Wooing.” President Edward Dwight Eaton introduces the main Commencement speaker, George Burton Adams, (below) class of 1873. 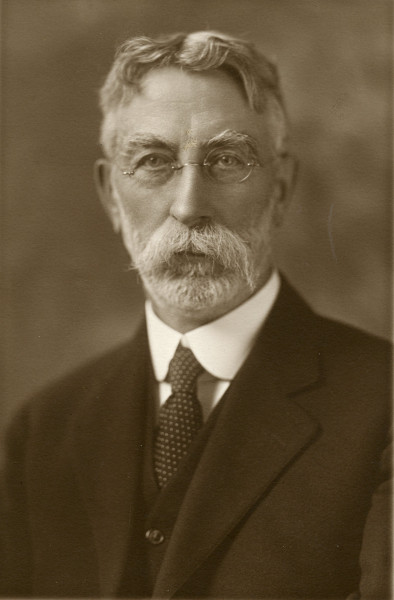 By 1913, Adams has achieved notable stature as Professor of Medieval History at Yale University, acclaimed as an author and for his role in establishing the well-regarded American Historical Review. Some years back, he’d also served as teacher and mentor for a young man who later becomes Beloit College’s most beloved history professor, Robert Kimball “Dickie” Richardson. Burton’s lengthy declamation, “The World is New,” focuses on – as one reporter explains later – “coming to an age when liberty, fraternity and equality shall truly prevail.” Like so many Commencement speakers in whatever year, Burton offers caution and encouragement for the soon-to-be newly minted graduates, especially poignant this year, given the incipient worldwide turmoil that will one day also engulf the United States:

It is, believe me, a new world before which we stand, new knowledge, new method, new resolve, new enthusiasm, new hope, and the greatest of these is hope. With you it largely rests to see that this hope so long in vain is now at last made real.

After another musical interlude, Dean George Collie announces on behalf of the faculty that 50 students have successfully completed their college course and recommends them for bachelor degrees. In a timeless ritual, each member of the graduating class walks across the platform to receive his or her diploma, clasps hands with the president, who speaks a kindly word or two, and then joins the ranks of Beloit College alumni forever.

Although by now the bells have already struck noon, Commencement 1913 is not over yet. First comes the awarding of college honors and prizes, followed by important announcements by President Eaton, below. 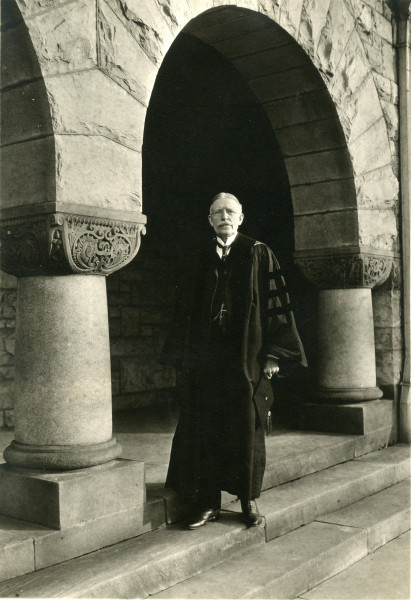 Peering out over the crowd, a smile lifting the tips of his luxuriant mustache, he reveals that the college has already raised one half of the proposed new endowment of $500,000. He then invites trustee Frank G. Logan to the rostra for the unveiling of a new college portrait. Logan speaks eloquently about his friend, Dr. D.K. Pearsons (below), one of Beloit College’s greatest benefactors, describing him as “the patron saint of old Beloit, our college.” In the 1890s Pearsons had donated substantial funds for the construction of Pearsons Hall of Science and for the first women’s dormitory, Emerson Hall. The Pearsons portrait, by painter Merton Grenhagen, is a startling likeness, from distinguished mutton chop sideburns to characteristic black silk top hat. 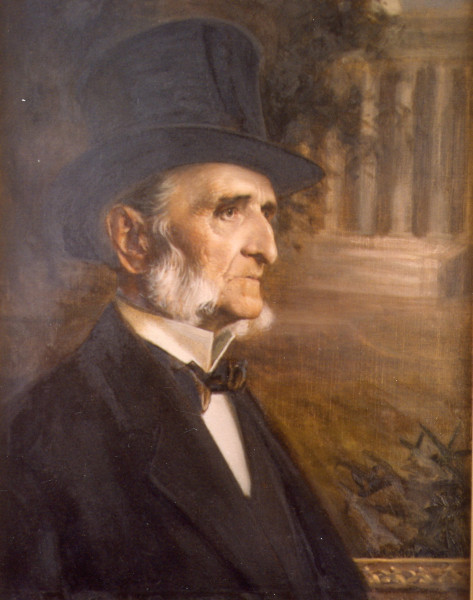 At long last, heads bow for the benediction. Then, amidst a few restrained whoops and hollers, President Eaton leads faculty and trustees off the platform and the new graduates begin their march back to campus. Within hours, Commencement 1913 becomes one more layer of Beloit College memory, waiting patiently for remembrance exactly one century later.