HomeLibrary & Information Technology Services Fridays with Fred: the makings of a Beloit benefactor

Fridays with Fred: the makings of a Beloit benefactor

Early history of the Logan Museum and its biggest contributor Frank Granger Logan.

Frank Granger Logan never went to college. He had no ties to Beloit, no record of giving to colleges or any other educational institutions. How, then, did he become one of the greatest benefactors in Beloit College’s history?

On May 13, 1914, he composed a handwritten autobiography and mailed it to his friend, Helen Brace Emerson, first curator of the college’s art museum. She immediately copied an extract which she handed to George L. Collie, first curator of the college’s anthropology museum, named after Frank Logan in January 1894. Both museums received major support and encouragement from Frank Logan and his wife, Josephine. 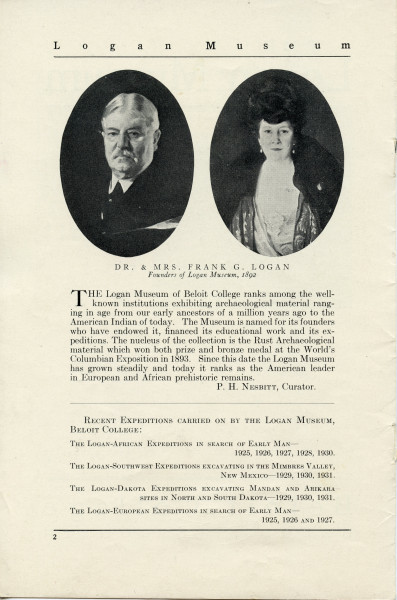 Logan was born in Cayuga County, New York, in 1851. The autobiography outlines his career and reveals his abiding interest in education:

My mother, until about middle life, was a school teacher endowed with remarkable mentality and training and I inherited from her whatever I have of ability to spell and define, which made her so valuable in our family when my brother and I were at the educational age. Until I was nineteen, I was a farmer’s boy, doing a farmer’s work, and because of the necessities of that strenuous life and to save my father from financial embarrassment, I was obliged to give up my college course, which had been my ambition at nineteen, on the offer of my father to seek whatever the bend of my mind was for the future. I came to Chicago in 1870, just previous to the great fire, and entered a clerkship on West Madison Street in a dry goods store, where I remained until the Marshall Field establishment was opened after the fire… 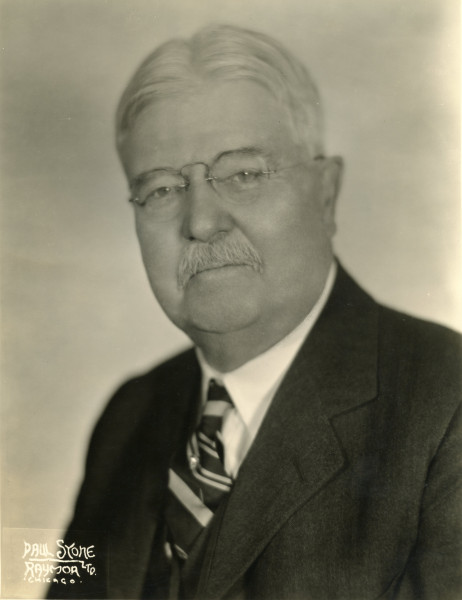 Although Marshall Field promoted Frank Logan, he felt slighted when they neglected to raise his salary after four years and so he resigned. Despite losing his job, he considered the move a lucky break:

Shortly afterwards I was offered an opening in a Grain Receiving House with wide connections in the West and large business in the Board of Trade, which business I mastered…and upon failure of my employers, a year or two afterwards I entered the business on my own account with some capital I had saved from my earnings.

His hard work as grain merchant and stockbroker earned him spectacular wealth and, in time, the freedom to develop personal interests. As he began to pursue his studies, he felt keenly his lack of formal education.

My life has been commercial and not public; strenuous in business and happy domestically. I have lived to see a great city and a great section developed about my chosen locality and I have learned the advantage and the value of the refining effect of Education and the study of Art, which explains my interest in both. Ever since my early struggles and later, when they became less necessary, I have been greatly interested in young men, not because of their youth and helplessness, unless combined with ambition and ability, and I have never found any satisfaction in taking hold of anyone to hold them up by sheer strength, but I have found pleasure and satisfaction in giving some necessary aid that might be taken advantage of and lead to development, and in this, in very many individual instances, I have been successful.

The World’s Columbian Exposition of 1892-’93 ultimately provided the core collections for both Beloit College museums and it was there at the “White City” that Frank Logan purchased the superb Horatio Nelson Rust Collection of American Antiquities, which he eventually donated to Beloit College. Stories differ about how Frank Logan and the college became acquainted, but clearly his ever-growing passion for art and archaeology aptly dovetailed with that of two Beloiters, Professor George L. Collie and art historian Helen Brace Emerson. In his unpublished autobiography, George Collie recalled visiting the Exposition and staying at Logan’s home for two weeks, where he met Major Rust:

Mr. Logan told me that he had bought the Rust Collection and the cases in which it was displayed. Mr. Logan was a man of wide interests in art and music. He was especially interested also in primitive life. This gift of the Rust Collection was a happy event for me. It determined what the museum was to be. It was to be devoted to the culture of primitive peoples.

Around the same time, Beloit College President Edward Dwight Eaton was eager to expand the college’s Board of Trustees to include prominent Chicago businessmen and financiers. He enlisted the help of his friend, Pastor Frank W. Gunsaulus, who took the college’s financial agent, Louis Edward Holden, for a visit to Frank Logan. Holden picks up the story in a 1930 letter:

We sent in our cards to Mr. Logan’s office, and were soon ushered into his presence. Dr. Gunsaulus introduced me…to Mr. Logan and then he laid his hand on Mr. Logan’s shoulder and said, “Frank, ‘one thing thou lackest.’” Mr. Logan looked up into his face and said, “Doctor, what do you mean?” “I mean that the end of life is not money making and the time has come when a great educational institution calls you to serve her,” and then he told him of Beloit’s call to him as a Trustee and what it ought to mean to him. I shall never forget the surprise that was shown in Mr. Logan’s face. I can see him yet as he said, “Why Doctor, such privileges are not for men like me. I am not a college graduate. I don’t know anything about education. I was thrown on my own responsibility at fourteen years of age and never saw the inside of a school after that date. Why should Beloit College select a man such as I am?” Dr. Gunsaulus replied, “Talk this over with Mrs. Logan and I think she will tell you that it is an honor that has come to you because of the real man that is inside of you. You need Beloit College to develop that man, and Beloit College needs you to develop her.” 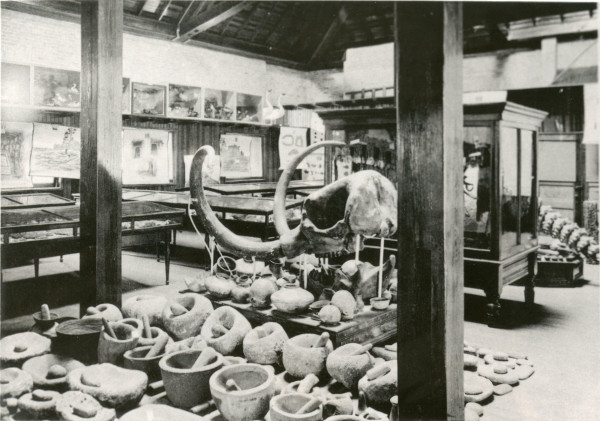 Then, with the encouragement of his wife, Frank Logan became a Beloit College trustee, a position he held – and treasured – until 1930.

For more than twenty years I have been an interested Trustee of Beloit College and in no other phase of my life have I taken a deeper interest or felt a more vital concern. Its success affects me personally and the future with its present outlook, is something over which my optimism dwells.

During his years as Trustee and until his death in 1937, Frank Logan provided financial backing to the college in countless ways, including support for anthropological expeditions to France, North Africa, and the southwestern United States, cash for academic prizes, retirement funds for faculty, and munificent pledges to the general endowment, as well as donation of Hancock Athletic Field in honor of his wife. When he received an honorary degree from the college in 1922, the boy who never had the opportunity to attend college gained an alma mater at last.

After his passing on July 18, 1937, an outpouring of tributes both commended and memorialized this remarkable “self-made” man who gave so much to Beloit College. Perhaps his longtime friend, George Collie, summed up Logan’s spirit of generosity best:

In one of his last letters…he quoted with approval the statement of an American patriot [Thomas Paine] as follows: “The world is my country, to do good my religion.” That sentence might well serve as his epitaph.