Fridays with Fred: an album of 1920s-era Beloit

A look at some images from photo albums of Bob Henert class of 1927.

Among the most sought-after items in the Beloit College Archives are the dozens of yearbooks, brimming with photographs, each volume both a relic and an invitation. Countless visitors page through these sturdy books which reflect on and describe different eras in Beloit College history. They “ooh” and “aah” over the elaborate volumes from the late 19th century which feature full-length articles, stunning artwork and wicked cartoons. Their faces turn somber while lingering over pages honoring the fallen soldiers of World War II. They chuckle in delight and puzzlement at the free-form yearbooks of the late 1960s and early 1970s, which grab the eye with fabulous photography and yet don’t provide a clue as to who anyone is. The Codex yearbooks of the 1920s, the special “Jazz Age” that F. Scott Fitzgerald summed up in his title, Flappers and Philosophers, included many splendid candid snapshots, usually printed in low-grade quality. Wouldn’t it be nice to see them in crisp and sharp detail?

Marty Henert’71 recently remedied that with the donation of two spectacular photo albums created by his father, Bob Henert, class of 1927. Bob was a very active student, serving as president of the Sigma Chi fraternity and of two honorary fraternities, was active on the debate team, and was a staff photographer for the Round Table. Fortunately for posterity, he was also the lead “snapshot photographer” for the Codex during his junior and senior years. Henert, who must have carted his camera everywhere, clearly had a documentary eye, judging from his countless rare images depicting student life. From moving day to Homecoming shenanigans, to pensive study in the dorm room, Henert caught it all.

Dozens of the shutterbug’s photographs graced the pages of the 1926 and 1927 editions of the Codex, most of which also appear as high quality prints in his carefully compiled albums. After graduation, the economics major worked in real estate finance and as a salesman before moving on to a longtime career as a government investigator for the Interior Revenue Service and Civil Service Commission. He was also a loyal Beloiter, active with the Alumni Council, serving as chairman of his class and helping to organize reunions. He passed away in 1980 in Aurora, Illinois.

Let’s take a trip through Bob Henert’s albums with a dozen images this week, followed by another dozen next week.

The annual “freshman-sophomore scrap” evolved from cane rush to greased pole fight. Although many photographs portray slime-laden students battling for supremacy, Bob caught a much rarer view, a student clinging for dear life while greasing the pole! 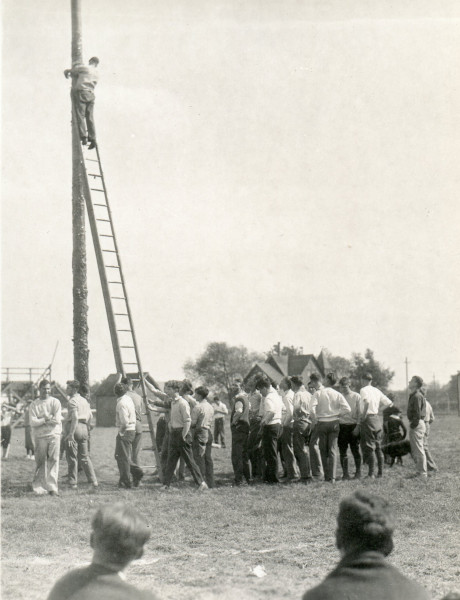 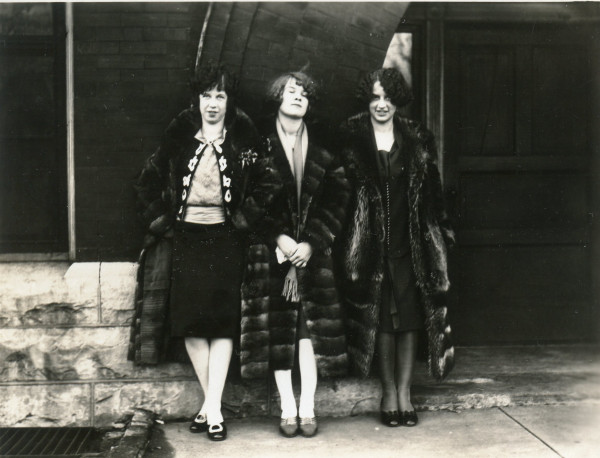 Homecoming 1926 found Beloit students scouring the community for discarded items in order to construct their traditional sky-high bonfire, which they stacked on the lawn near Pearsons Hall. Note the student up top, holding on tight, with old Chapin Hall in the background. 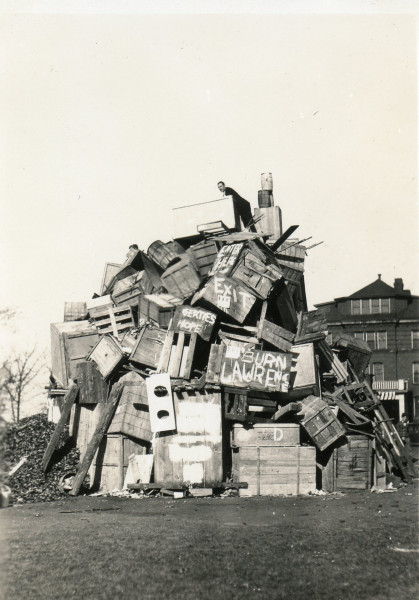 The Fairbanks-Morse factory band marches behind President Irving Maurer (in glasses), perched on the backseat of a Cadillac as the annual Homecoming Parade winds through downtown Beloit. 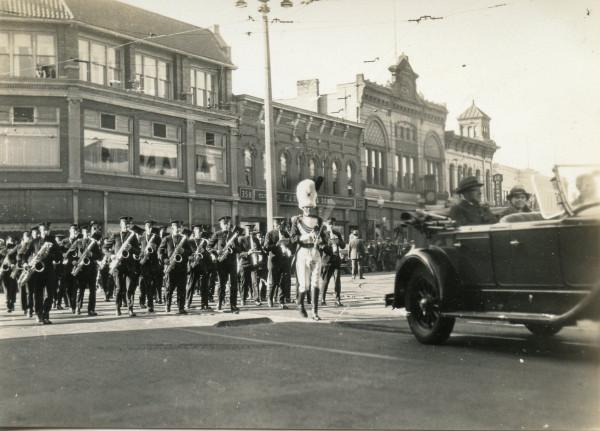 Bob captioned this photograph of his beloved Sigma Chi house, “Homecoming – the morning after.” Pranksters from other fraternities must have plastered the exterior with cornstalks and weeds, but couldn’t climb high enough to deface the “Go Red Devils” sign. Beloit’s athletic teams played under the moniker Blue Devils for about 20 years before becoming Buccaneers. 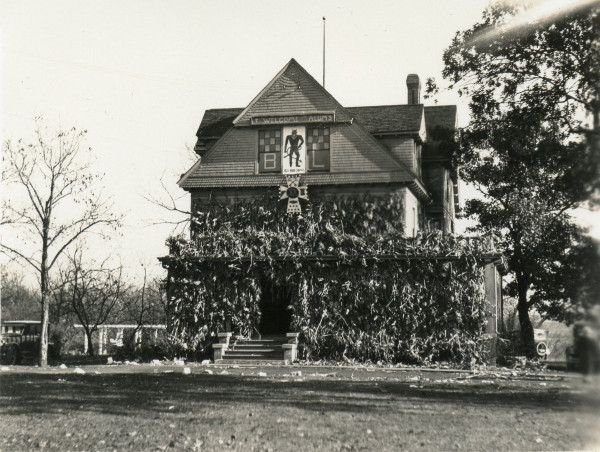 Helen Galaty studies in her room at old Chapin Hall, which served the college as a dormitory from 1891 until 1965, when it gave way to Chamberlin Hall of Science. Was Bob Henert being ironic when he captioned the photograph, “Helen Galaty representing dignity?” The poster to her right advertises the Beloit Players’ production of the comic play, Suppressed Desires, by Susan Gaspell and George Cram Cook. 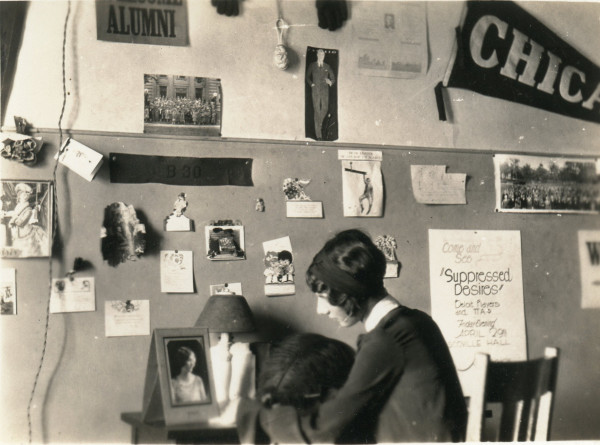 In those days, postal workers delivered mail directly to the dormitories. 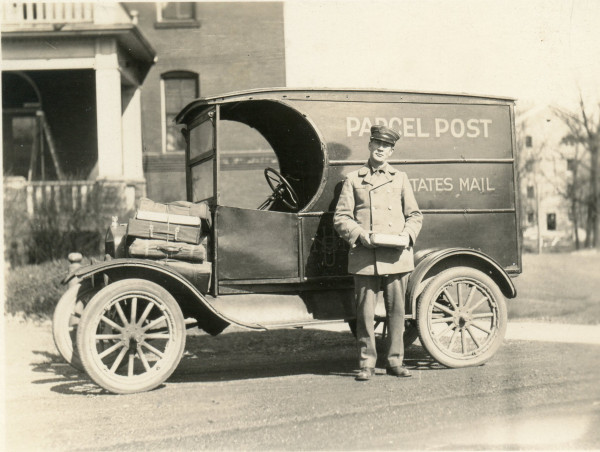 Bob Henert took dozens of informal portraits of students, faculty and staff. In this one, “Prexy” Maurer steps out with his jaunty white cane, easy to misplace on a snowy day.

An extremely rare interior view of radio station WEBW in Pearsons Hall. The college’s initial foray into broadcasting lasted from 1924 to 1930. 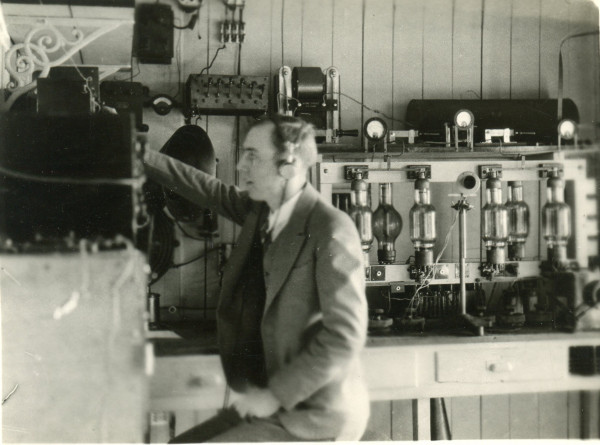 In the mid-1920s, the college’s Physical Plant staff numbered three workers, a supervisor, and, it seems, one aging pickup truck parked at the side of Middle College. 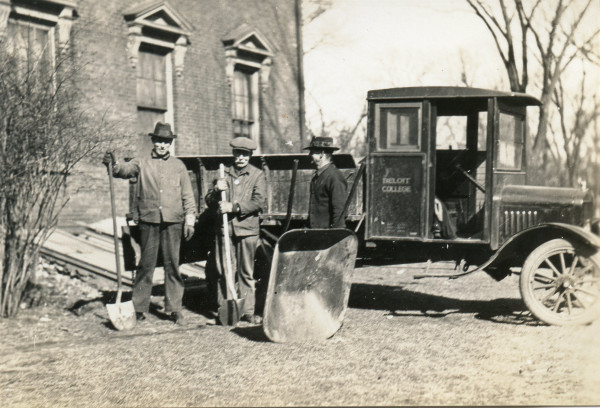 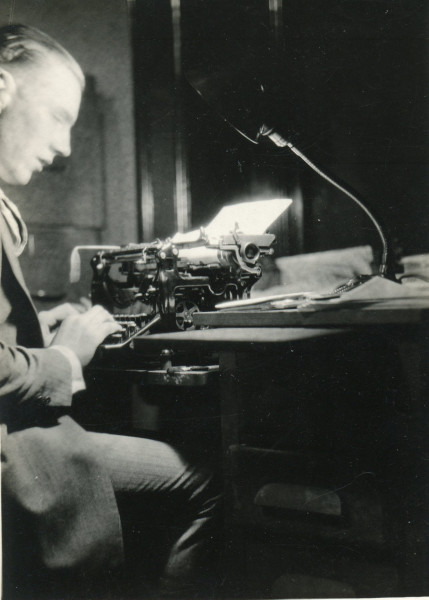 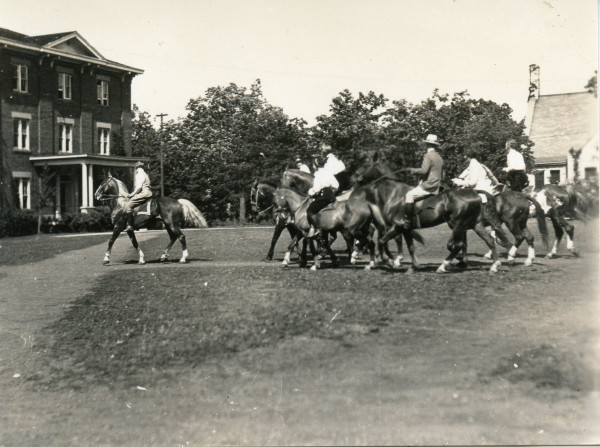