The Chicago Magazine’s look at Beloit in the late 1800s.

A visitor wandering into a bookstore in 1857 might cast an eager eye over display shelves crowded with monthly magazines. Although lacking the gaudy covers and frantic headlines of today, a mid-19th century periodical provided avid readers with commentary and current opinion, useful information on agriculture or business or travel as well as essays, poetry, and fiction. 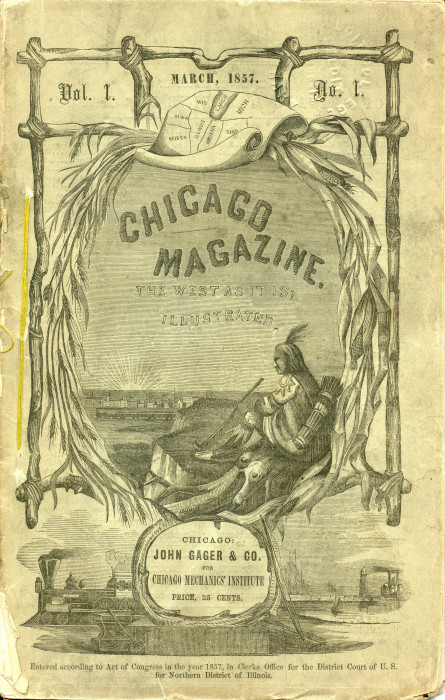 In March of 1857, the Chicago Mechanics’ Institute sought to combat the dominance of the Eastern literary establishment by publishing a new journal focusing on and promoting the daily life and work of the Midwest, then called simply “the West.” The editors subtitled Chicago Magazine, “The West as It Is,” describing it as “a pass word that will go like the electric chain of thought from one end of the Union to the other.” They aimed, among other goals, to present the West to the East, touting its commerce and its culture, from railroads and manufacturing to literature and the arts. The first issue included a history of Chicago, biographies and portraits of prominent Western men, news briefs, and many fine woodcut illustrations.

“The first great department of our work is…to portray and illustrate the West,” the editor wrote in his introduction. “We shall gather every month, from the thousand objects of interest in its past history, present growth, future promises, and in its natural scenery, subjects for these illustrations. Some one or more important town will be daguerreotyped monthly in features, and recorded in history upon our pages.”

The editors chose for its first profile of a western town, a burgeoning community some 90 miles northwest of Chicago. Beloit, Wisconsin was only two decades old. Accompanying its history was a panoramic view of the city, a woodcut created from a daguerreotype photograph taken on Jan. 15, 1857 “from the top of the commanding and beautiful residence of Rev. Alex. Montgomery, which occupies a high bluff about half a mile south of the city limits, upon the Illinois side…” Known today as the Bushnell Wheeler House, the residence serves as home for the South Beloit Historical Society. An article in the April 1946 issue of the Beloit College alumni magazine places the college, then consisting of Middle College and North College, on a hill to the far right. However, comparing the woodcut to photographs taken from the same vantage point in later years, it appears that the college actually resides on the hill to the far left! The image is one of the earliest showing the college. 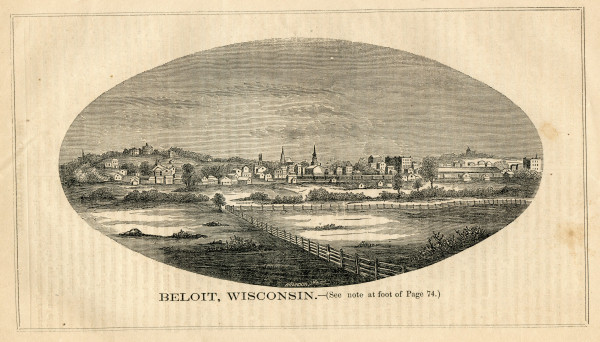 Showing off the wonderfully ornate language of 1857, a few choice quotes from the Chicago Magazine profile provide a colorful glimpse into Beloit’s youth.

On its location:
“Upon either side of Rock River, in the extreme south of Rock county, Wis., just north of the line that separates that State from its elder sister, Illinois, is the young and growing city of Beloit, delightfully situated between two continuous bluffs which skirt its eastern and western border, marking the course of the river; upon the picturesque brows of which are situated the Seminary and College buildings, the Public Schools, and many fine private residences…Around her is one of the finest agricultural regions in the Northwest…the early settlers of Rock county saw broad, unexplored, and almost boundless fields before them, whose luxuriant soil only waited to receive the plow of the husbandman, to yield him a rich reward – gently undulating, bounded by high bluffs, covered with excellent timber – a beautiful stream flowing through the midst.”

On its naming:
“About this time [1837] the name of the village, which had for a few months been called New Albany, was changed to the more euphonious one of Beloit, which notwithstanding its classical sound, has neither the merit of being significant in anything, like ancient names, or of following the more ruling passion of fastening some pompous quotation from antiquity to most incongruous and inapt transitions from time past to time present. It was, as we are informed, purely the product of accident, or we should rather say perhaps, an “inspiration” of one of the “seers” who were on a certain day convened together in the capacity of a “committee” for a christening, making sorry attempts to jumble English and French together.”

On its college:
“As early as 1844, only two years after the town of Beloit had been recognized by the Territorial Legislature, the idea of establishing a college for the northwest in Beloit, was agitated. Three years afterwards, in 1847, the corner stone of the first college edifice was laid under the auspices of the Congregational and Presbyterian denominations. Since 1850 the institution has been under the charge of a competent faculty, headed by Rev. A.L. Chapin, D.D., as President. The college grounds are situated on the east side of Rock River upon a high bluff, commanding a beautiful view of the city and adjacent country, near the former site of “Turtle Village,” which, prior to the Black Hawk war, was a considerable town of the Winnebago Indians, the site and building being a donation from the citizens of Beloit. The institution has received some slight endowments from its friends at the East. It has a fine cabinet, large library, good apparatus, and the reputation of graduating as thorough classes as any that go forth from eastern schools.”

On its future:
“There is no city in the circle of our acquaintance, where its business facilities, educational advantages and the high moral tone of her citizens has made us feel more in love with it and its people than this. The busy streets, thronged hotels, the tone of her press, the well filled slips upon the Sabbath day, all indicate to the stranger that he is among a people who, while they are “diligent in business” and rapidly gaining in material prosperity, do not lose sight of the great truths of religion, good sense and sound morals…Her history scarcely traces back more than a score of years, yet in that time the valley of the Rock River, once the favorite hunting grounds of the Pottawatomies, Winnebagoe and Saux Indians, now echoes the busy hum of the steam mill, the waterwheel and the anvil…”

An original copy of the March 1857 issue of Chicago Magazine is available in the Beloit College Archives and online at the Internet Archive: http://archive.org/details/chicagomagazinew01chic