A glimmer of well-known cartoonist from the 1890s and Beloit College alumnus, Jay Norwood “Ding” Darling.

Jay Norwood “Ding” Darling, class of 1899, is one of Beloit College’s most famous graduates. He won the Pulitzer Prize for editorial cartoons—twice—was commissioned by President Franklin D. Roosevelt to create the first federal duck stamp in support of wetland conservation, appointed head of the U.S. Biological Survey, and founded the National Wildlife Federation. The J.N. “Ding” Darling National Wildlife Refuge on Sanibel Island in Florida and Lake Darling State Park in his native Iowa honor him.

Ding Darling was a dynamo of activity during his student days, serving as managing editor of the Round Table, art editor of the Codex annual, singing in the college glee club and quartet, leading the mandolin club, managing the track team, playing on class football and baseball teams, and of course drawing countless cartoons and pictures to the great neglect of his studies. All the while he built a legend as one of Beloit’s unconventional “quirky” students, a tag that still resonates today.

This year’s Beloit International Film Festival features a documentary film about Ding Darling, directed by Sam Koltinsky of the Marvo Entertainment Group. According to their publicity, America’s Darling is “the true story of how a nationally-known cartoonist changed America by influencing her Presidents, shaping her landscapes and winning the hearts of her people.” Koltinsky will be on hand at both showings, Friday at 11 a.m. in Wilson Theatre here on campus, and Saturday at 11 a.m. at the Rotary River Center, located in Riverside Park and just a brisk walk downhill from campus. The director will display some of Darling’s original artwork.

In honor of Ding Darling’s life and work, we’ve set up a special exhibit of our Darling-related archival holdings, curated by Amara Pugens’13. Look for a “teaser” in one of the display cases at the front entrance of the library and continue downstairs for a more extensive exhibit outside and inside the Reading Room of the Beloit College Archives.

Meanwhile, we present a selection of Ding Darling’s artwork created as a student at Beloit College. While covering a variety of topics, his drawings also reveal that Ding had not yet settled on a definitive signature. Jay N. Darling or J. N. Ding? J.N.D.? Or just plain Ding? He couldn’t decide.

Darling, at right, posed in a photographer’s studio with fellow members of the Beloit College Quartette. 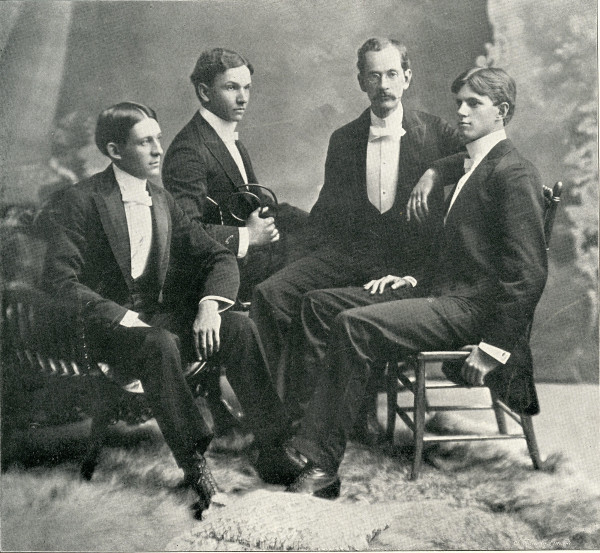 Although Ding Darling’s comic artwork sparkles throughout the 1899 Codex, his irreverent humor appears at its most notorious in this two-page spread. Did his impertinence toward authority cause the college to suspend Ding Darling for a year? Accounts vary. Perhaps the very reverend President Eaton abhorred dancing and would never in his life don a Highland kilt. Perhaps ancient old-guard professor William Porter objected to the droll depiction of him with fingers in mouth and holding sheet music to “A Hot Time in the Old Town Tonight.” And no doubt every Beloit College student successfully identified the artful caricatures of favorite professors pirouetting in ballet tutus. On a scrapbook page listing his college activities, Darling wrote, “Fired for Codex drawings and poor marks.” 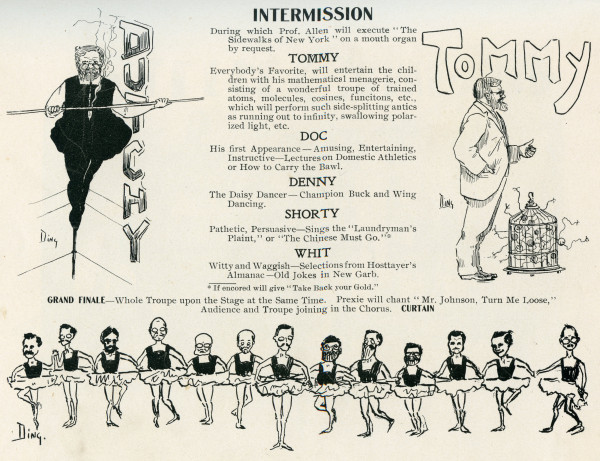 Bound Round Table volumes from Ding Darling’s era did not include the original covers from each issue. A few of Darling’s special issue covers survive, however, discovered in the basement of a daycare center where they’d sat for decades in moldering boxes, rescued some years ago. The first of these dates from December 1896, Darling’s sophomore year, whilethe second appeared in December 1899 when Darling was retaking his senior year. 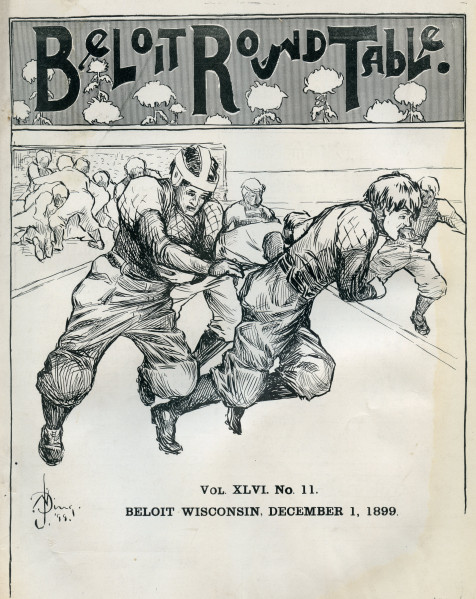 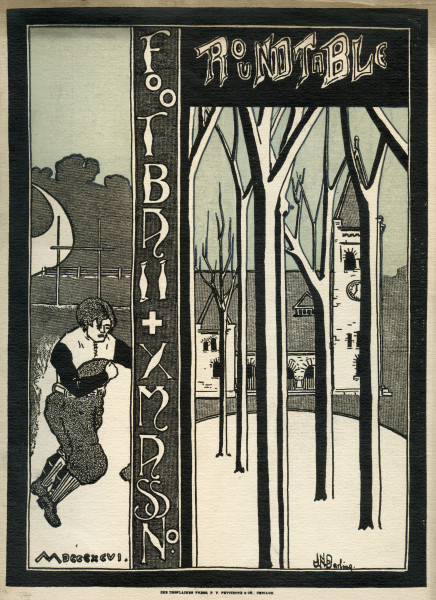 Ding entitled this cartoon from the 1897 Codex, “Achilles Leads the Trojan Team Against Madison.” Although the college baseball team routinely beat teams from much larger universities, the same was not true for football until a monumental contest at Beloit in 1896, as noted by a Round Table reporter: “The greatest event in the history of football at Beloit College was recorded Saturday last, October 31st when the University of Wisconsin and Beloit teams battled to a standstill at Keep Athletic Field.” Final score: 6-6.

During his junior year, Darling apparently flunked all of his classes except biology, his favorite. This drawing of a deer sniffing trash left by careless campers is an early example of his interest in the environment and conservation. 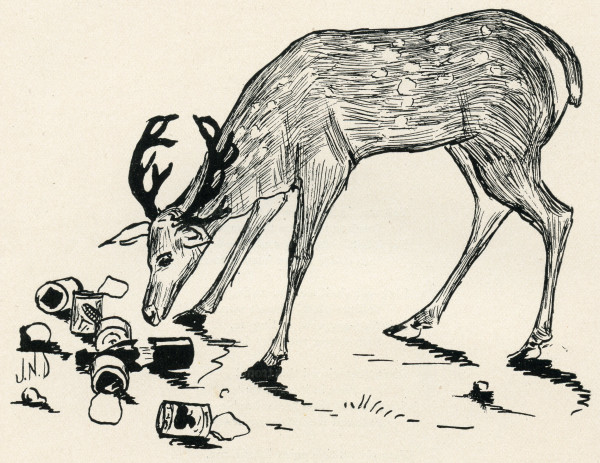 Recreation on the Rock River and Turtle Creek was a much more popular pastime in the 1890s than among students today. During clement weather, Darling and his fellow students plied rowboats, paddled canoes, and lazed onshore, fishing pole in hand, and in the winter held skating parties. 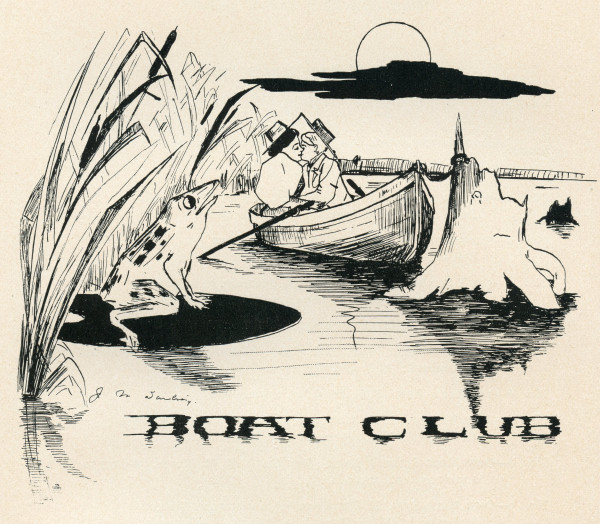 Alumni of any era reminisce about college days—athletic triumphs, fraternity hijinks, dancing with a loved one, walking across the stage at Commencement. 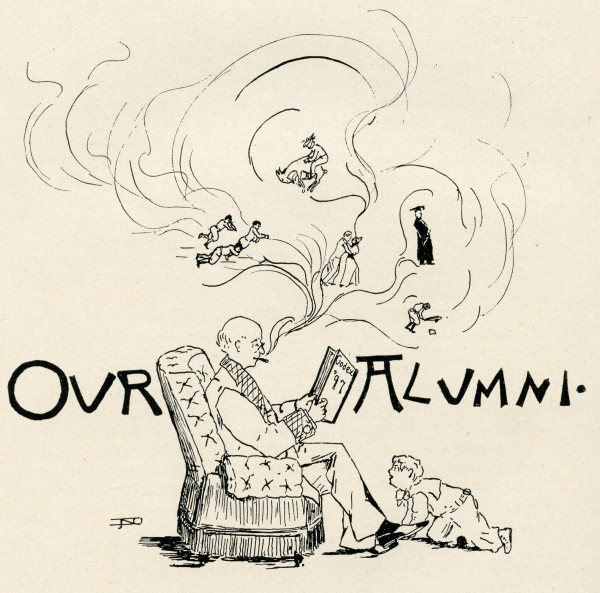 In the “College Grave-Yard,” Darling poked fun at the rivalries between classes. The class of 1898 was “dead to begin with.” A bleeding heart and the comment “faculty love not returned” designated the class of 1899, host of the junior prom. 1900 was “asleep” and 1901 “died of overexposure.” Darling also included a tombstone bearing the Greek letters for sorority Theta Pi Gamma, which died, “aged three months.” Beloit’s first sorority did not meet with faculty approval and consequently waited many years before official sanction.

Darling was a member of the Beta Theta Pi fraternity. Codex volumes traditionally used macabre images to lead off the section on campus Greek groups.

The class of 1899 issued the Codex during its junior year, featuring a cover by Ding Darling, which he cleverly replicated in this picture of a young man and woman attentively paging through the 1899 Codex! Beloit College had become coeducational in the fall of 1895, Darling’s freshman year. 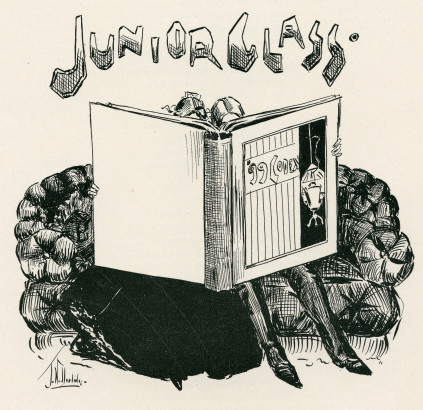 Darling’s tribute to the senior class reveals a newly minted graduate, diploma in hand, stepping away from the jumbled accumulation of four years of scholastic activity. 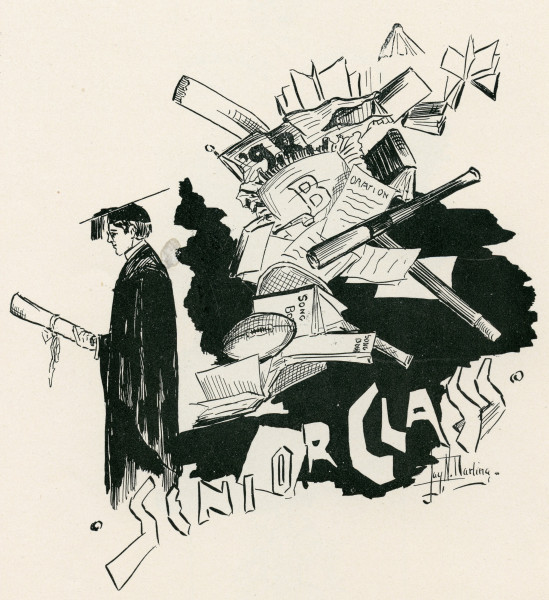